When making an account on OGS there’s this slider that combines ranks with a timeline. It told me I’m supposed to be 1 dan in a set timeframe, but I’ve passed that since long and don’t do timetravel. I deem it dangerous. Will OGS ban me when they find out I’ve been unfaithful for sake of getting in? Was I insulted by it? Well, yes and no.

I think OGS should not tell new users what rank they achieve over the years. I think OGS should refrain from telling her users any implied expectations when it comes to rank (except for sandbagging maybe), unless she aims for an exclusive userbase. The slider with ranks is a nice feature, but the timeline is a bad idea.

I created an account recently, so I thought it best to share the experience before it fades.
Thanks for making OGS. So, many nice features and all in html5. Very nice.

The idea with the time slider is to enable folks who don’t have a good idea about their rank to make an educated guess. If you’re confident about your rank though please use that

Thanks for taking time to reply.
I’ve used rank for registration, so yeah, you’re right: not really a problem there and I can accept it’s not possible to satisfy everybody all the time.

Still, combining ranks with a time line leaves open the suggestion there is an expectation set by the server. I know that is not really the case, and I knew when registering. But then again, why does OGS suggests something it doesn’t want to suggest?

Maybe It’s overplay on my side. Thinking the slider to be faulty may be right technically, but it overlooks it’s intention, which seems to be providing users a way to set a rank. So, I guess in the end my claim is too much about too little.

I haven’t seen the new registration dialog as I predate Nova, so this may be off-base and can be ignored.

Instead of using time, use something less specific. One could have a very rough description of skill. Assuming that anyone above 10 kyu will have some idea as to their rank, setting the maximum rank a SWAG can give at 10 kyu is relatively safe as the further above 10 kyu one goes the less likely they are to not know their rank. I think something like this might work:

The provisional status works well for getting this right fairly quickly.

An example of the time slider when set to 10 months or 12 kyu. 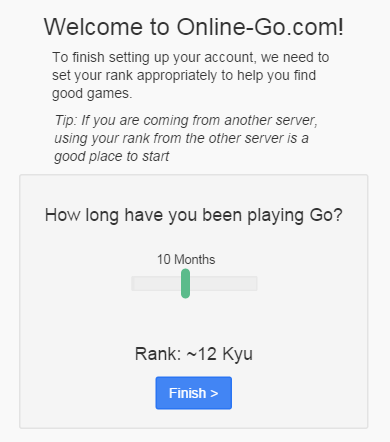 I agree with the idea that anyone stronger than 10 kyu, or about, will have little need for guidance when setting a rank. When using the slider for ranks only, (most) double digit kyu levels could have the ‘New player’, ‘Beginner’ or ‘No longer a beginner’ message that Traveller suggested.