Accounts with highest number of games

It’s not 100% accurate since different players were polled at different times, but should be mostly correct.

With all due respect, that moonduck boy and wannabe Jedi don’t belong on the serious list, much like many of the others - their game lists are telling. But I’m pleased to see that the N games played proves incredibly useful at finding fakes.

I’m also shocked to see how many games people can play and still be ddk. stinky with 27 games a day on average. Damn.

I understand that there’re fakes there, but I thought it would be unfair for me to decide who is who. So I put up objective table undistorted by my arbitrary judgments. Apart from fakes, some of them are bots who aren’t marked as bots, so that’s not ideal too.

Maybe that 17k is an unmarked bot.

Well in that case it would perhaps be more objective to edit the title to say “highest rated accounts” instead of ‘top … players’. But yes, unmarked bots could explain a lot of those peculiarities. I was under the impression bots had to be ‘registered as such’.

I think most players with 10k games and DDK ratings are just people who like Go but have a low skill ceiling for the game, for whatever reason. Enog, for example, is a 79 year old retiree, according to his profile. As much as we’d like to assume that anyone can become Shodan with enough practice, plenty of people hit skill ceilings far below that and will never substantially improve, regardless of how many games they play. Most Shodan players, similarly, will never get to pro-level play, even if Go is their main hobby and they devote thousands of hours to study. Not everyone has a brain equally suited to the game.

The 17k looks like an anomaly, though. Dozens of active correspondence games, and lots of losses by timeout. Seems like a real person, but probably not an accurate rating.

I was under the impression bots had to be ‘registered as such’.

Supposed to be, but I have seen several here in the past year. I called attention to the first one I saw by creating this dead-end thread (New Bot Created a Game). However, that bot had a brief career, so maybe it got banned. I never created threads for the other bots I’ve seen, because no one seemed interested.

Oh, and I forgot to say, since we have these fakers with sky-high ratings and proud 9d+ next to their names (It’s not even “?”) I suspect that Glicko doesn’t work.

I’d add the ‘active’ criteria. That would be interesting. Seeing that some of the strongest players haven’t been around for few years is a little depressing. How about a rank for players that have played at least 10 games in last 3 months?

The reason their rating is sky-high is that they played their own sock puppet accounts on high handicap. I thought it didn’t work that way (and maybe it was fixed? When I tried to get a high rank by beating a bot with high handicap I didn’t gain anything) and these accs are just forsaken relics of a fixed exploit, but of course if they aren’t, that would merit an investigation. I think Glicko works fine for the most part. You win, you rise up, you lose, you drop down.

thought it would be unfair for me to decide who is who.

But, as @smurph said, that’s what you actually did by publishing a list and labelling it serious.

I checked out the FrancisCol account and it doesn’t look like a legit strong player (most games won by timeout).

vitality is definitely a strong account, but the way it got to 9d+ looks dubious, mayb an issue with the ranking algorithm?

Again, at this point looking at the title tournaments might be a better indication of who is strong and has a rating based on real games.

Note that it’s not called “serious” but “more serious”, that is more serious than “goofy post”. And I think it’s relatively serious since I provided ratings, deviations and number of games. I don’t think people can mistake an account with 3 games for legit strong account.

Plus you showed the exact reason why I shouldn’t filter list like that. You decided FrancisCol is fake because he plays blitz and therefore usually times out instead of resignation.

And last time I checked title tournaments are correspondence with excruciatingly long time control. A lot of strong players simply don’t have time for that.

I think it’s relatively serious since I provided ratings, deviations and number of games.

You decided FrancisCol is fake because he plays blitz and therefore usually times out instead of resignation.

I am not sure what you mean by “fake”. I said the ranking was not legit, and I’ll stand by that. And just to be clear it’s the opponent who times out. Look at this for example: 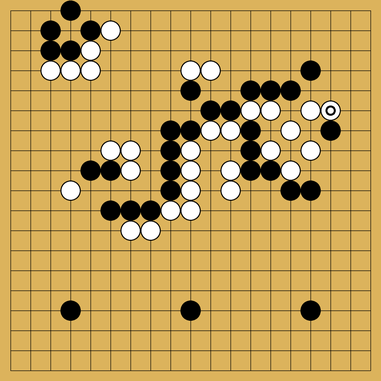 My issue with vitality is a while back he had a account called https://online-go.com/player/39195/ vitatilyblitz with playing generally 30 secs per move which is kinda weird for a human I would think. but maybe i’m over thinking things.

Yea 30s is not blitz. 10s is blitz. 30s is normal. Every strong player knows that. Something’s up.

Data is correct though. Maybe you don’t like title choice like smurph, and that’s ok, let’s change it. “Accounts with highest rating”. That should fix it.

And of course his opponents often time out, 30s per 10 stones is very fast blitz. Note that he also times out when he can’t find a way out: https://online-go.com/game/6439321

Now 30s per 10 stones, I can get behind. It should basically guarantee he’s facing actual human play.

at least 10 games in last 3 months

N of games is number of games within last 3 months here. Oh, some ranks already changed from yesterday when I downloaded data. Oh, well.

Of the active top 10, peecatchoo, Sadaharu, rzhang, vlin, and Leonix are the ones that aren’t playing almost entirely bots. They’re probably the actual top players on OGS, right now…

Sadaharu is an interesting case. All his individual ranks are MUCH lower than the main ranking. Not sure what’s going on there, but apparently there is some weird discrepancy. I understand that this can happen for players on the rise, but for a stable top players I’d hope the ranks would convertge eventually.