In this group: https://online-go.com/group/2514
A couple of tournaments was created with this settings:
Time: fischer: 2d +16h until 3d.
Format: RoundRobin
Invitation only, starts when full.

It does the second time that OGS suppresses our tournaments without we modify it.
It’s quite rageous according to all the work we have to do to create something nice for all players.

Unfortunately, if the problem persists, i’ll be obligated to resign my World Cup project and if it is the case, I’ll leave OGS.

I hope that solutions will be fond as soon as possible because, re-do the same work which was nearly finished before is frustating for us.

Thanks to help me as soon as possible.

first, sorry about the trouble.

Could you elaborate a little for me? What do you mean OGS suppresses the tournaments? That they are canceled without your input? I do not deal with tournaments too much, but I have never heard that happening before

Could you post your full settings? Could it be possible that the problem lies within not getting the set minimum number of players before starting date? If you insist that those tournaments were canceled without reason I will notify the developers, but it is surprising that noone would report a similar issue already (at least as far as I know.) 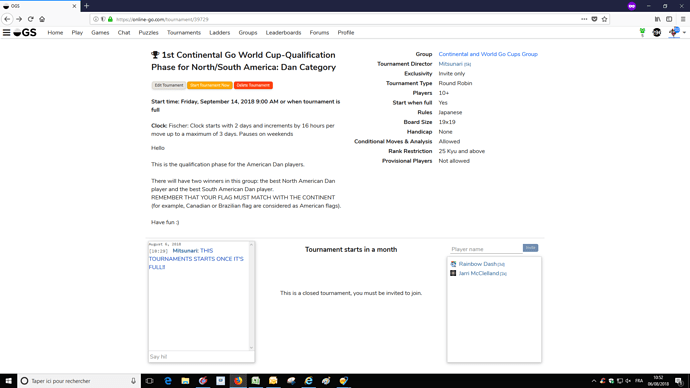 I have changed the title of this thread to try to more accurately reflect the problem you seem to be describing. “Suppressed” has a nefarious, censorship implication that does not seem appropriate here.

Was this resolved? What was the issue? I’m wondering if some of my tournaments might be affected as they are also usually ‘start when full’ and may pass their start date before starting.

Nb. I haven’t had the same problem yet but I would like to do what I can to avoid it and the inconvenience to participants.