This tournament appears to be stuck. Looking at the chat for the tournament it appears multiple games were started for some players. @Purble has a theory that the tournament will not continue unless these additional spawned games are also finished. Can a moderator take a look at the tournament and see what they think might be holding it up? Purble’s theory makes a lot of sense.

In my experience, what Purble says is true: when all the games (even those that do not appear on the tournament page) are finished, the next round will start.

I was wondering what was going on in this tournament… 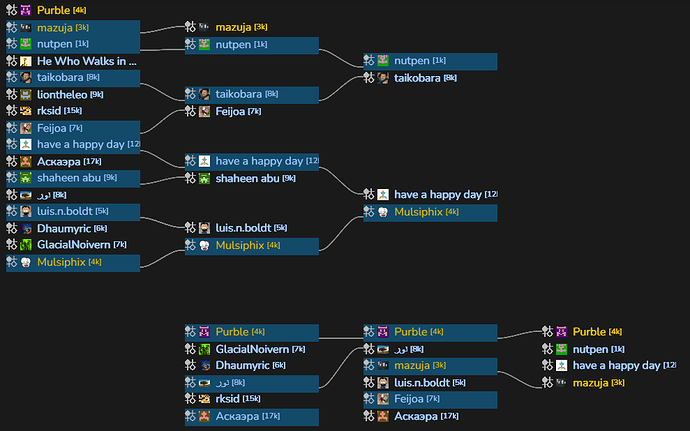 It got stranger. Seems like losses in the unlisted games counted against us, so I got eliminated and everyone is now in the loser’s bracket. It will be interesting to see how this one finishes up!

But @Mulsiphix seems to have won both the visible game and their game against @nutpen… @Mulsiphix1 did you drop out?

@Mulsiphix1 did you drop out?

Not to my knowledge. I won my matches and am waiting for the tournament to serve me up another match. At least I think that is what is going on

Well, it finished and managed to assign places in a reasonable way somehow despite all the players who only lost one (visible) match.