I’m wondering if there are any good resources about the change from one game phase to the next.
What i mean is that there is the opening, middle game and endgame phases but is there agreement/clarity on the transition from one to the next. I realise this is more of academic interest than something that will actually help improve one’s game but I feel it’s something I don’t really understand and would like to know better.

I suppose there is a fuzzy border between the game phases but I feel like understanding the boundaries would at least be interesting and maybe even helpful. I know that you shouldn’t play endgame moves too early - but if you don’t know when the endgame is then that’s hard to apply in practice. Equally, you see some games where one or two corners remain with only a single stone in them (and so feel like still in the “opening”) while half the board can be covered in a sprawling fight (middle game or maybe part of the opening). Likewise, it seems that you can play double sente endgames moves remarkably early (in the middlegame??)

Or maybe it’s all about timing, tempo, direction of play and shape (none of which I know that much about) and I’m thinking about it all wrong.

The shortest i can summarise my opinion:

The opening is when both players lay out their positions, and seek out to stabilise their groups while maximising their future potential for territory compared to the other player.

The middle game starts when the first fight breaks out, usually after one of the players feels like he/she has less potential than the other guy so “something must be done.”

The end-game happens when all the groups that were weak, and/or in danger of dying, have been settled. Both players agree that groups are either unconditionally alive, or have no more hope for being rescued, and everything left is only about points.

The middle game starts when the first fight breaks out, usually after one of the players feels like he/she has less potential than the other guy so “something must be done.”

This makes me realise that I’m not completely sure what “fighting” is!
I guess joseki is not fighting. But equally fighting can start with the first joseki right? In which case the “opening” may only have been a dozen moves, or less. (Aside, how many moves in the pro game with the shortest opening/least moves to fighting starting?)

And thank you for the endgame definition. Helps me realise that I’ll have problems with paying endgame moves at the wrong time because I find it hard to know if groups are in danger of dying or able to be rescued or definitively settled!

This is an interesting topic. How about I give some examples of the opening-midgame transition from my own games? 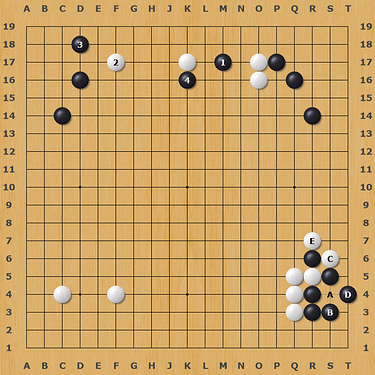 Black begins the transition from opening to midgame by invading White’s extension, hoping White will respond passively at M16 and that he can then take the corner with O18. White resists with (2), leaning on the top left corner and Black defends. White then signals his consent to enter midgame fighting by playing the gote sequence A - E in the lower right. Black plays (4) to begin the midgame. 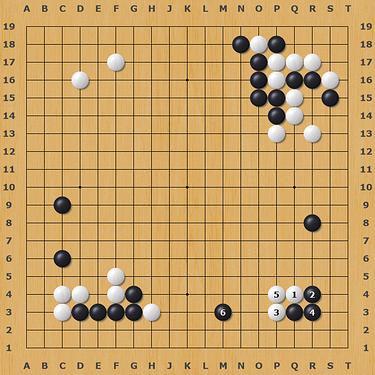 Having established positions in the other quarters of the board, White is obliged to enter Black’s main sphere of influence, choosing the attachment (1) to avoid the influence of R8. Black chooses a simple variation from (2) to (5), making a solid group in the corner, and then attacks the floating white group with a pincer. White will have to fight to defend his stones, and thus the midgame has begun. 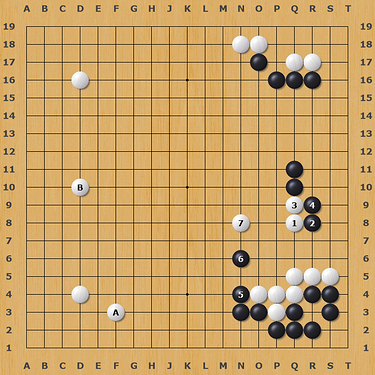 Due to a mistake in responding to a joseki deviation in the lower right, White has been left with a heavy eyeless group. He attempts to strengthen the group with forcing exchanges from (1) to (4). White then makes a couple of bold tenukis at A and B on the left side, with Black continuing locally at (5) and (6). Finally White responds to the threat by jumping out. Now Black will try to continue his attack to catch up with the profit made by White elsewhere. 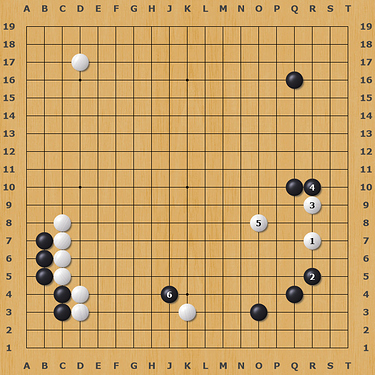 Here White begins the middlegame unilaterally with an early invasion of the right side. Black defends the corner, White exchanges (3) for (4) to support his shape and then jumps out. Black expects White to aim at N4 in order to unite the right side stones with K3 as the wall of a moyo on the bottom side, so he preemptively jumps in with a reducing shoulderhit whilst the new group is still weak. The relative strength of White’s wall, Black’s shoulderhit, K3, and the right side stones will now be debated. 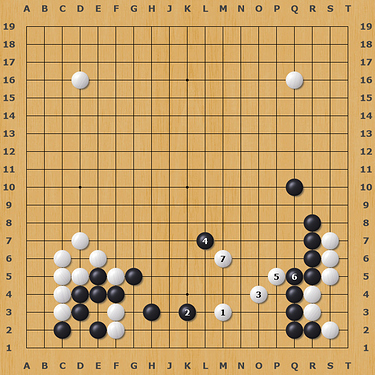 Having made a corner mistake in the lower left, White is confronted with the potential of a black moyo on the bottom side. He invades the side and Black makes a relatively gentle attack with (2). White (3) is an incautious move that, instead of just jumping out, tries to exploit the Q5 defect. Black responds with a very ambitious move that attempts to capture the white stones on a large scale, so White tries to make a living shape with (5) and (7).

So, you see that the midgame usually (but not always) starts with some sort of invasion and a resultant attack by the opponent.

For me - the simplest way to keep track of those phases is based on the availability of certain things on the board, and the priorities specific to each phase.

In that sense, the opening is defined by the availability of un-claimed potential sitting on the board. The standard priorities for grabbing that potential are:

Those are the usual priorities, but if someone gets pincered, or you get involved in a joseki that creates 5 un-settled groups, then those priorities fly out the window, and you have to switch gears and switch to mid-game thinking to keep your weak groups alive while attending to whole board play as best as you can. This is why players will focus on one corner fight for 20-50 moves while there are still 2 other corners sitting there with barely anything in them - they have to resolve that situation before they can return to opening-game priorities.

Once all the un-claimed potential is taken, then it’s time to start focusing on mid-game priorities:

Eventually, all the big move opportunities will also disappear as the two players resolve their fights and claim the available potential. Once that is done, you are into the endgame. 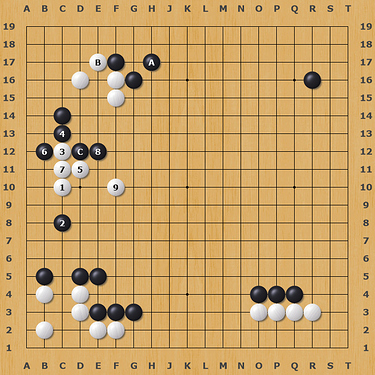 An unorthodox sequence A, B, C is played in the top left. White, noting the potential of a black moyo on the left side, invades at (1). Black attacks with (2) to (8) and White’s eyeless group runs out into the centre. Black’s group is also left with defects that may become relevant. 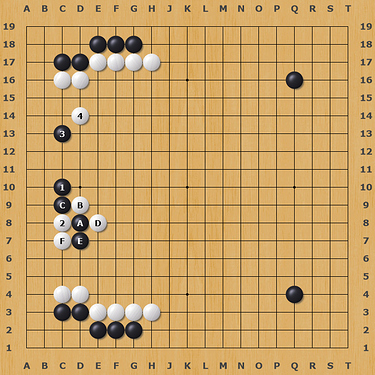 Black invades at (1) and White gently pressures with (2) to (4). In a confrontational attempt to make shape and prevent further attack, Black attaches to (2). White refuses to back down with D7 and instead plays the demanding sequence (A) to (F). Black’s side group, Black’s (A) / (E) group, White’s (B) / (D) group, and White’s (2) / (F) group will now have to fight for survival. 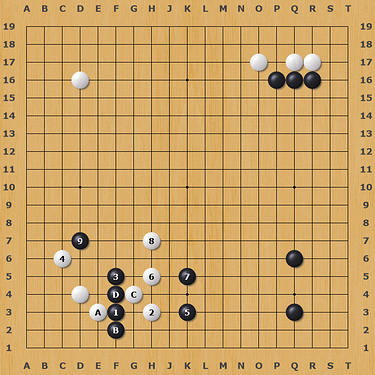 In this game, White makes an inaccurate joseki choice with the pincer (2). Black’s response is to jump out once and then to counterpincer at (5) and continue with (7) in order to increase the potential of his shimari. White plays questionable exchanges of (A) for (B) and ( C ) for (D) and then obliges to jump out, Black (9) setting off a running fight. 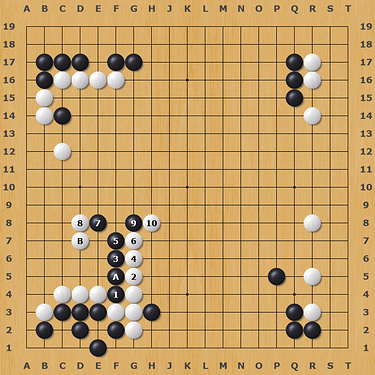 In this game the midgame begins relatively late, with White’s refusal to answer the invasion-preparation peep (A) and instead protecting the target area directly with (B). Black makes the natural but committal cut at (1) and White makes several push exchanges. Black’s exchange of (7) for (8) gives him the shape required to hane over White’s outside stones, and White counterhanes to maintain the pressure. 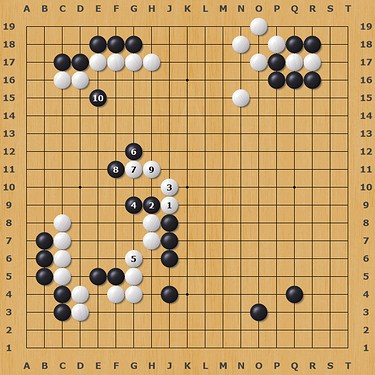 White plays the demanding hane (1) despite having some shape weakness. Black cuts with fighting spirit, considering the possibility of a large white moyo on the left side. White (3), Black (4) extend and White then has to protect his defect with (5). Black (6) is a loose jump that aims to treat (2) and (4) lightly. White plays (7) – (9) to force a disconnection but Black has already moved on, maintaining speed with a forcing move.

Thank you everyone, esp @bugcat.
I have never thought about the idea that my opponent starting a fight is potentially a sign that they think I have more or too much potential. I’ll also be trying to keep in mind more the balance of potential in the opening and staying invading/attacking for that reason rather than essentially at random as I do now. Could be useful!

I’ll look forward to a similar exposition of the middle/end game transition!

I don’t have many examples of the transition into endgame. Most of my games end in resignation or timeout. But here goes. You’ll recognise some of these games from the first opening segment c: 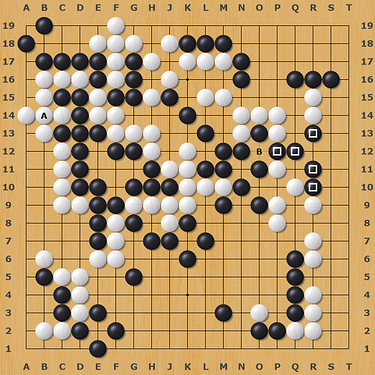 There is an ongoing ko to disconnect the squared stones. White, though, decides to abandon it by protecting his defect at A. Black accepts the offer to end the ko and fills at B. White starts the endgame. 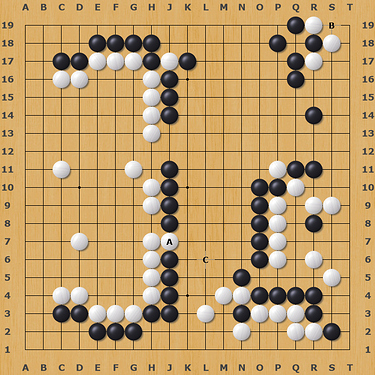 White has used a ko to support his invasion of the top right corner. He plays a ko threat A which Black ignores, capturing at B. White begins the endgame with C. 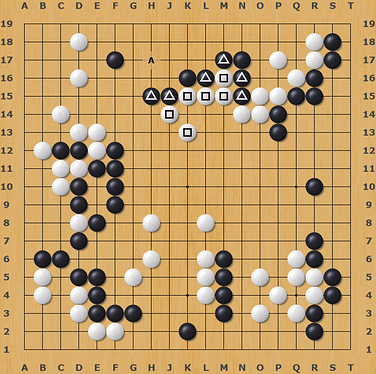 White has defined the shape of his weak group by exchanging the squared moves for the triangled ones. In the process, though, he has lost the potential of invasion at A. Black can now start the endgame. 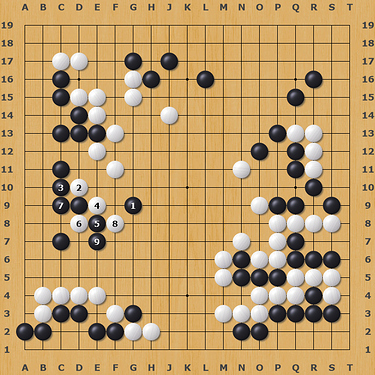 Black (1) jumps into White’s huge central moyo. White plays a two-atari sequence to disconnect the trespasser from Black’s forces on the left side. 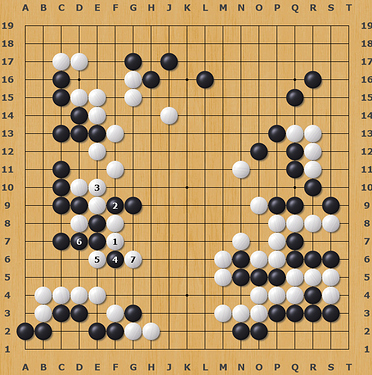 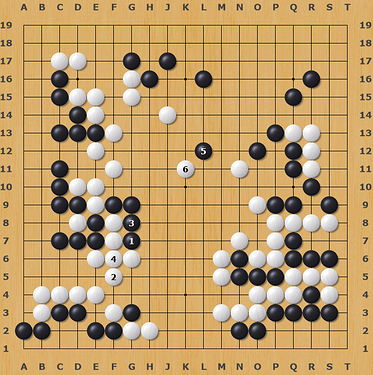 White’s defence of his moyo is successful: Black contents himself to build a small group to which he could threaten to connect, and then exchanges (5) for (6) to reduce. Black can continue the endgame.

Amazing, thank you @bugcat. Again I’m surprised at how early the endgame starts in these examples. I need to contemplate this further!