Game example 2: https://online-go.com/game/8713415 (neither player accepts the incorrect scores yet)

It looks like the players incorrectly accepted a suggested scoring.

It is important to realise that the scoring system can’t determine some life and death situations, so it asks the players if the decision it made is right.

It is the reponsibility of the players to make sure they agree with the scoring system before accepting the score.

If you don’t agree, you click on the squares or stones that are wrong, and they toggle.

For example 2, neither players accept the incorrect scores yet, and white tried clicking the squares that were wrong, but nothing corrected.

But the game is in the “finished” state?

Game 2 is over as well. Either you both accepted or the time limit for changing the score ran out. (It is there to protect people from sore losers who would want to make the game endless)

Just click the groups that are marked wrong during scoring (as the accompanying text tells you to do). There is also some trick with shift+clicking for some really problematic fine tuning, but that is almost never necessary.

Yes, the game has finished and it asked players to accept the “incorrect” scores, which white tried to figure out how to correct it include clicking those blue squares in no vain.

@huangyungjan: you played until now 1883 games on OGS. This is the second thread you start in few days about scoring system. Please forgive my frankness, but It looks really strange to me that you could have any doubt about the stone removal phase after 1883 games.

Anyway: you have only 24h to accept or modify the automatic scoring. If you modify, the countdown starts again and you have 24 more hours to change it.
You can call a moderator in the meantime.
If nothing happens when you clic on blue squares or dead stones, most likely it’s a browser or connection issue.

Thanks for your frankness, and it’s true that I’ve played so many games for so many years and it never appeared to have this kind of problems. Therefore, I shouldn’t and were actually never doubted the scoring system, which should have explained why I might have accepted the wrong scores without carefully checking on game example 1.
On game example 2, I noticed that the scores was not accurate and my opponent probably noticed it too, neither one of us accepted the scores. I tried clicking those blue squares in question following suggestions given here in this Forum but couldn’t fix it. while I was still trying to find other options, (at least one of them is resume the game and put down a few more stones to make it less confusing for the system, which I thought should be my last option under Japanese rule of this game). Then the wrong result came without any warning.

To have 2 games with wrong decisions happened within such a short time period, which surprised me and caused some concerns from this long time faithful player of this site. I’m just an average player who enjoyed the game, win or lose, nonetheless. If these happened to me, it could happen to any other players on this site. I appreciate tremendously whoever the groups or individuals created this platform that brings joy to go-players around the world just like myself, I really shouldn’t ask too much, but as long as these kind of incidents continue occurring, which means the current system still has room for improvement or fine tuning, so it could serve the players better, i.e. When error occurs like these examples, there’s remedies to make it right as long as no disputes among both players plus at least one arbitrating moderator, So every player got treated fair and square with the correct game results; and/or at game deciding stage, there’s a warning clock to force players to take actions to prevent from defaulting the game or being timed-out… just a humble thought.
.

By the way, I annulled those couple games

Cough, cough the ticking clock could be what you are looking for -> 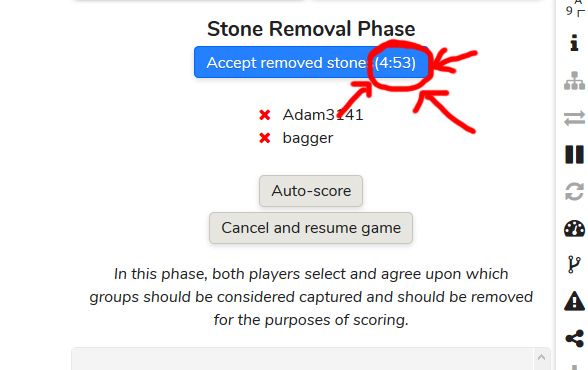 yeah the scoring system is not perfect and sometimes makes mistakes, but unless you or somebody you know can write a better one (which you really totally can if you know how: https://github.com/online-go) I am afraid we must ask players to check their positions. AFAIK that is currently the standart on most of the servers, because running such a strong AI on all the finished games is probably unthinkable under normal budgets.

at least one arbitrating moderator

We have several in fact, but as you can imagine the number of games is high and they are only people.

Meaning you couldn’t get it right? Or did nothing change at all?
If that is true that would be a problem. I am not connected with OGS developement in any way, but I assume they would appreciate if you could confirm the issue on other games and if it persists write as many details that can be relevant as you can and start a new support thread for it. I have never heard it happen though, so please make sure it really is an issue

@huangyungjan: thanks for your kind reply. I’m just a beginner, so perhaps I pay more attention on scoring than you do. So to me is very normal double check any game in the stone removal phase. I looked at some of your recent games and noticed that in some case the players ended the game with few unresolved spot.

Dame are properly marked blue, but in these games there are minor mistakes in scoring that you probably didn’t notice. I assume that it could be boring for a skilled player to play even the last little move when it’s clear that the game is won or lost.

For instance, in this game G16 isn’t a point for black and stones at H15, H14 and E16 aren’t dead. They couldn’t change the result (black win anyway) but the scoring is incorrect. In this other game there are 4 points for black that are marked blue (around M3-O1). When all works properly, it’s very easy to deal with that: with few click players are able to fix the score. If you experienced problems in this situation, I still think that it could be a browser issue or a connection issue. Sometimes the server response is a little slow.

I tried clicking around in the score estimate mode.

In the first case your opponent might have tricked you into accepting the wrong score since the default scoring seem correct.

In the second case: I think you could click on the dead stone: R3 to rectify the scoring on lower right corner.

I think the issue come with the system not being able to decide which group is dead or not, so clicking on dead stone is more effective than clicking on blue square, because the source of the error is that system wouldn’t know if they should mark the blue square as black’s or whites because it’s not sure about the status of surrounding stones.

Thanks for your kind comment, which helps me understand a lot more areas that I never paid attention to.
Next time I’ll try clicking on the dead stones too.

Wow! You really paid attention to the details, I’d never noticed it unless you point those out.
Hat’s off to you and thanks!

Thanks! I saw that the 2 games were annulled.
Does this mean the games’ simply been cancelled out or do I get the points back and the ladder ranks being put back at the proper position?

Ladder positions are sadly not recovered, but rating points are.

Oh well, thanks for the help anyway.