So I at time use D20 dice to generate first 5-10 moves for both players randomly and than you have to work with what you have. I am thinking we could make tournament like that.

Do you guys like the idea? Would you join?

Are they fully random moves, or random but basically sound moves?

At first I thought I would only be interested in basically sound moves, though maybe random stones would be intersting.

But I’m thinking the dice choses a random pro game and each player gets the first random number of moves.

That way no-one could say that their opening position was not “fair” … afterall, a pro played it!

Truly random - you throw D20 twice to get coordinates of a move. If you get 20 you re-roll. If it happens to be illegal move you reroll both coordinates.

The idea is to get something totally weird and than you have to adapt and work with it. We did it once as method to give me handicap (he got random I played whatever I wanted) and guy actually managed to get use of 1st line stone to kill my corner eventually

(yeah, not proud of that)

I hope that games can be made unranked so people don’t fret over getting worse moves and taking rank hit and whatnot. I am just looking to have fun.

Maybe add the komi-bid system to this idea?

Not bad idea, not bad idea AT ALL. But how would you make it reality. Does tournament system on OGS allow for changing side?

Maybe to eliminate unfair advantage from one of the sides, make the position mirrored?

… or make each player play the game from both sides.

really like the idea! unfortunately i dont see myself joining another tournament for a little while since i kinda overdid it in the past it looks like

the games should be unranked of course

No way. Mirror go is very specific thing and I fear it would degrade into pissing contest with opposing ladders and such very fast. The idea is to work with something unexpected and unique.

Are the move auto generated with some program or do you have to manually input the moves from whatever way you get your openings from?

I suspect the latter

BTW: For funsies: here is example of one randomly generated board 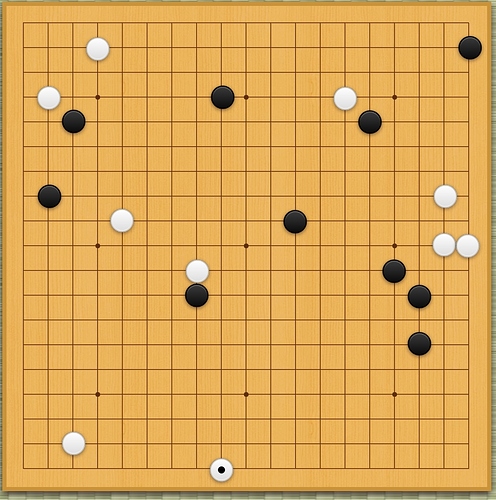 If you make both sides try their luck with the position as both black and white, it could be a way to make it fair.

You can think about other good ways to distribute those stones. Say, first pick a quarter randomly and then go for d8+1 for coords between 2-2 to 9-9. If you like to stay close to 4th line then 2d4 instead of d8+1 can give you the right balance.

To summarize, throw 5 4-sided dices and have: