I think I misunderstood how the discussions associated with the joseki explorer work, I thought that a new comment on an “exploration” branch would post something here, but I guess the comment is just with the last “official node”. So I’m (re-)posting this one for more visibility, since I can’t seem to find the thread associated with it

I was looking at this joseki since it comes up more in my games: 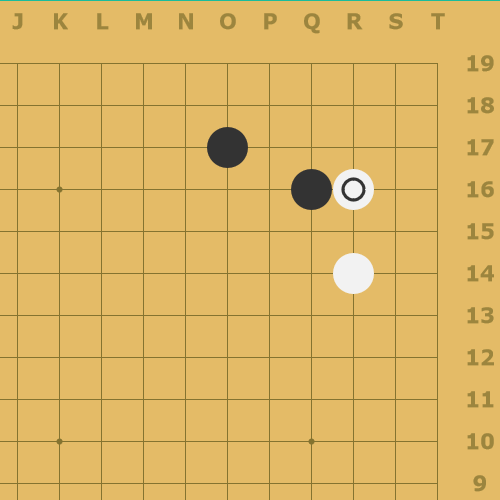 Nick Sibicky presents this variation in a video from last year:

Which has the elegant property of containing embedded inside the same shape as the traditional “first joseki” (slide instead of attach). But I was surprised that this is not in OGS explorer, not in Josekipedia, and there are significantly fewer results in Waltheri compared to the one space jump (to R12)

I know it’s not good to be dogmatic about joseki, I should just play them both and see how it goes, and I plan to do that. I just wonder, does it have some major problem?

My guess is that it leaves weaknesses at R12 or R13 in case black gets more stones nearby.

I believe the issue is that if Black turns at Q14, White will have to respond at R13 (since the double hane would come up against the atari.).

If White is going to have a stone at R13, then, he’d rather not have R11 as well, since that would be overconcentrated due to R13 already providing a lot of shape.

If White has R11 at R12, though, and Black turns, White can play Q13 due to having a tiger’s mouth shape.

Indeed. And the 2-space jump also leaves more aji for a peep at S13 after a black checking move at R9, to steal white’s base.

The evolution of this joseki can be summarised as each player realising how much of a vital point q14 is and wanting to get it earlier. AI has made the attach of first picture far more popular than the slide, but pre-AI attach was still seen, albeit mostly in response to a loose pincer. With the 2-space extension, black can get q14 in sente as a likely good exchange (if he wants to increase centre thickness, other times might prefer to approach on side at r9) with white generally needing to extend at r13. In fact black can try to do even better by first exchanging q12 for r12.

But then AI said, don’t even extend as white, just directly play q14 as it’s such a vital point. This does leave a peep at s13, but there’s counters like in the Ke Jie vs AlphaGo game.

And then black said, “Hey q14 is such a vital point, I might play there instead of r18 before you can”.

thank you, this is a helpful way to explain it, and clarified for me parts of the video from Yeonwoo about this joseki

and thanks to the others for their comments also

AFAIK the importance of white Q14 is still situational, depending on if white’s group will make good enough influence to compensate for black’s potential profit after continuations from Play Go at online-go.com! | OGS

Yes, at the early stages of the opening that bots typically play this attach and hane joseki this trade is quite ok for White (the ataris on Black’s 4 stones using aji of White’s dead 4 are valuable), but later on in the game Black’s local corner profit is relatively more valuable. So I’d say the useful rule of thumb is in early opening when there’s not much between the approach and lower right corner (say just a single stone or shimari) then push up is default best move, but later in game as sides are filled you might prefer to settle with an extension.