I saw this “squished sanrensei” at the 10k level. It’s a sanrensei but with one of the corners on a 5-4, pointing into the hoshi.

It looks especially squished with white on the side 3-4! 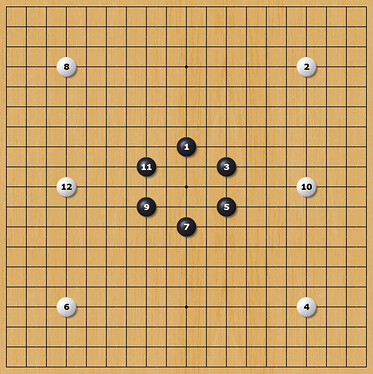 The benzene opening, inspired by Uberdude and his post Feel-good moves - #20 by Uberdude

Requiring six stones, it’s less efficient than most diamond openings, including – probably – the “tengen ponnuki” (which is not, pedantically, a ponnuki).

It’s much more efficient, though, than the famous ten-stone HI formation.

Also, like with the diamond formation there are a whole series of progressively looser benzene / hexagon openings possible. Consider this one, a couple of lines out: 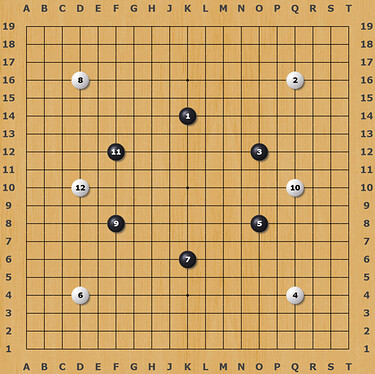 This is listed on SL as the “oro-style sanrensei”, without etymological explanation.

I guess that it means a “CyberOro-style sanrensei”, ie. a sanrensei of the kind played on that server, otherwise known as WBaduk. But we may likely never know.

It could also be called the M sanrensei. 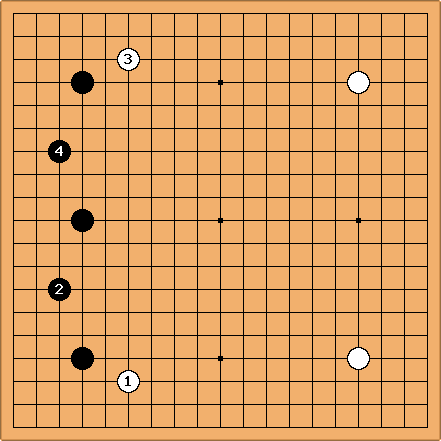 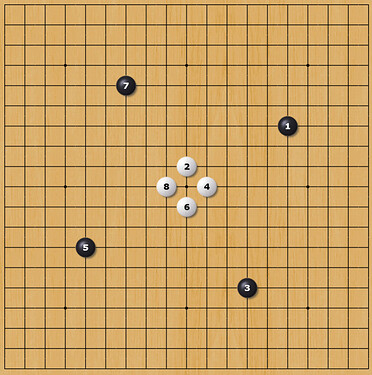 Countering the black hole fuseki with a tengen diamond.

According to the bot, it only loses komi. I expect that if the diamond were one or two spaces larger it’d be more efficient and receive an even better score.

This would make an interesting setup for a game of opening freedom (delayed komi) Go.

I wanted to talk a bit about an interesting opening formation that was only played for a short time around the turn of this century, almost exclusively by Takemiya Masaki. That formation is the “double-kosumi sanrensei”. It looks like this: [image] It usually appeared in play against a nirensei, consituting a nine-move opening branch. Let’s examine the context. This opening was first played in 1996. Takemiya had been one the top professionals in Japan and, indeed, the world for about twenty… 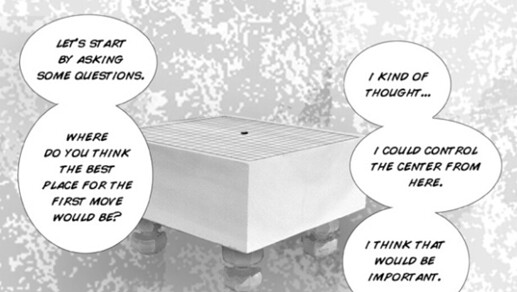 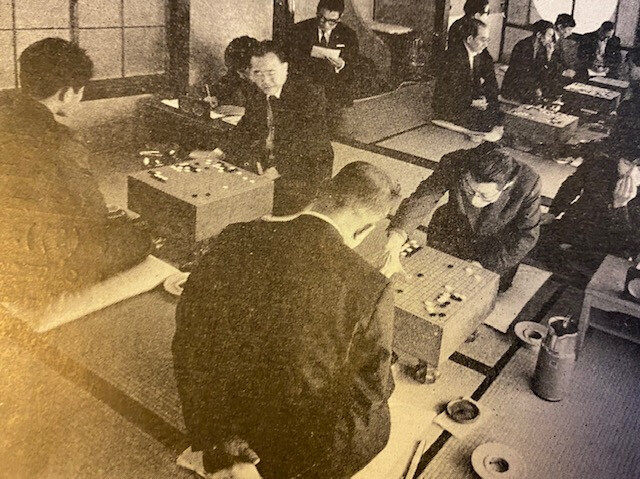 It might be surprising to us today, but Fujisawa – as well as Sakata (b. 1920) – was still a top-flight player at this time, although both had passed their peaks.

Hosai’s uncle, Hideyuki / Shuko (b. 1925), of course went on to bigger and better things over the following fifteen years.

As for Kajiwara, he never won a big title but did challenge for the Oza in 1964, in his early 40s.

SL has a page on strange openings with some examples. And one on fuseki experiments.

Pierre Colmez 5d played a version with 7-7s against Guo Juan in the Brussels Grand Prix, “some years” before 2002. 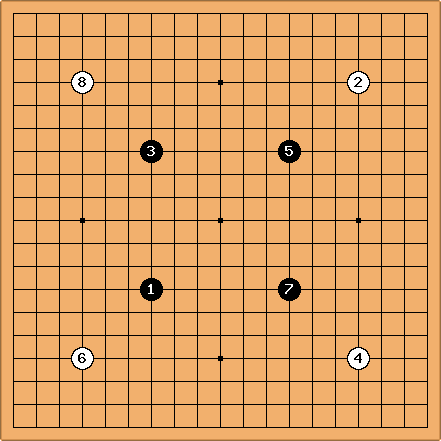 Reportedly, “after ⑦ both players were laughing”.

It’s not the size of the box, it’s how you use it.

It’s nice to list these experiments, would be even more nice to see the full games which resulted… 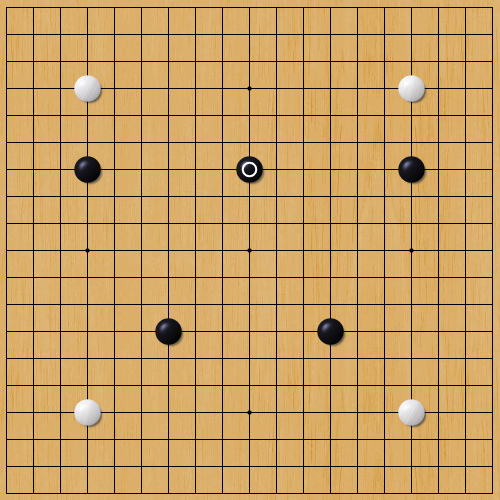 Against a good player it is next to impossible to form territory in the center of the board, unless it is based on one of the sides or corners.

There is, however, an old rule of etiquette which is not consistent with this theory of the opening; it used to be regarded as exceedingly impolite and insulting to play the first stone on the handicap point in the center of the board, called “Ten gen.” It has been explained to me that the reason for this rule is that such a move was supposed to assure the victory to the first player, and it is related that when on one occasion Murase Shuho had defeated a rival many times in succession, the latter, becoming desperate, apologized for his rudeness and placed his stone on this spot, and Murase, nevertheless, succeeded in winning the game, which was regarded as evidence of his great skill.

It has, however, been shown by Honinbo Dosaku that this move gives the first player no decisive advantage, and I have been also told by some Japanese that the reason that this move is regarded as impolite is because it is a wasted move, and implies a disrespect for the adversary’s skill, and from what experience I have had in the game I think the latter explanation is more plausible. At all events, such a move is most unusual and can only be utilized by a player of the highest skill. 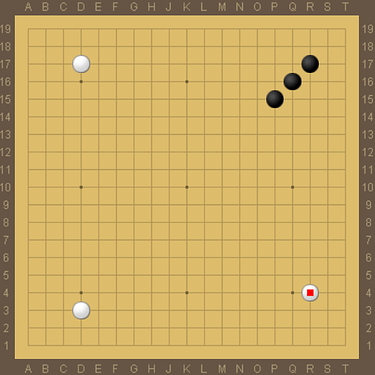 Black won by 8.5 points, fifteen on the board.

Fairbairn, from the same thread as that 2011 game:

By coincidence, I am reading a Chinese book at the moment which talks about a Chinese master, Wang Hannian, who flourished around 1650 ~ 1670. The book made the point that the manual Ji Qingxia-guan Yipu [Selected games from the Qingxia Pavilion] contains 580 games, only four of which begin with first move at tengen (the Chinese used to call these Taiji Tu - Great Ultimate Games).

Three of these four tengen games were by Wang Hannian. The other was by Zhou Xingyuan, who (the book says) “was a guoshou [a 9-dan] during the Qing Daoguang period [1821~1851] when the Opium War took place.” …

… Wang was experimenting with the Great Ultimate at exactly the same time as Dosaku was facing tengen, and in both cases the experiments ended quickly and irrevocably. Dosaku had first had to face tengen in the 1670 Castle Games, in which the term tengen was apparently concocted by his opponent, Yasui Santetsu (aka Shibukawa Harumi, the Court Astronomer).

But two years later, “Minamisato Yohee challenged Dosaku again with first move at tengen, but he chose the wrong opponent. The great genius Dosaku completely blocked out the power of tengen, and first move on tengen was thereafter never popular.” This is not totally accurate in that, on the one hand, the old Chinese manual Shishi Xianji (Devices from the Hermit’s Cave) begins with 20 examples of White 1 on tengen and, on the other hand, Minamisato played another tengen game against “genius” Dosaku and managed to win.