I wanted to talk a bit about an interesting opening formation that was only played for a short time around the turn of this century, almost exclusively by Takemiya Masaki.

That formation is the “double-kosumi sanrensei”. It looks like this:

It usually appeared in play against a nirensei, consituting a nine-move opening branch.

Let’s examine the context. This opening was first played in 1996. Takemiya had been one the top professionals in Japan and, indeed, the world for about twenty years, since winning the 31st Honinbo from Ishida Yoshio in 1976. He was, and is, well-known as a sanrensei specialist. Takemiya was arguably coming to the end of his prime since he lost his final big Japanese title, the Meijin, to Cho Chikun in that year 1996, but I think most people would agree that he remained very strong into the mid-2000s.

For this opening exploration, we’re going to use Waltheri, because it’s free. Waltheri has about 80,000 kifu, representing – I think – around three fifths of the professional kifu that can be found in a larger database like GoGoD. So some relevant games may be missing.

As said, the opening was apparently first played by Takemiya in 1996, in that fateful Meijin title match (the 21st) in which he lost his title to Cho Chikun.

This game already shows several features which would become common in this opening. 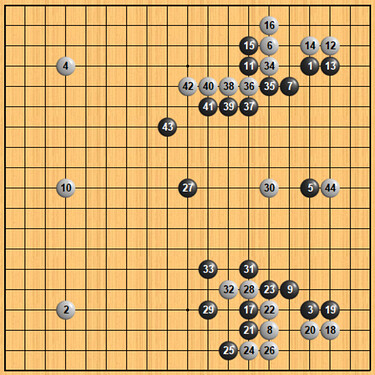 Two months later, the opening was tried by Rui Naiwei, probably the strongest ever female professional, in the USA–Taiwan Supergo event, against Peng Jinghua. She was at this time living in California and thus was chosen to represent America. This was one of very few times it was used by a player other than Takemiya.

The game developed similarly to Takemiya–Cho, however Peng – not the life and death expert that Cho was at that time – chose a shallower invasion with (32), although Rui was still able to attack on a large scale with (35). White eventually lived, but the status of the central group was apparently an issue until (192) and Black still ended up winning. 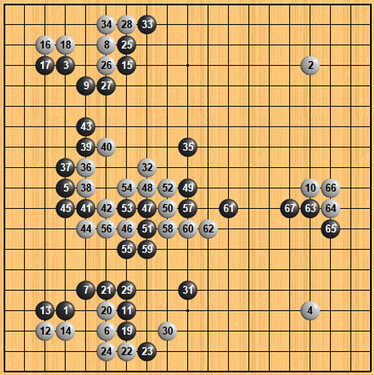 The formation was not played at all in 1997, but resurfaced in a big way in 1998. It’s not clear what the first game of this resurgence was, since Waltheri has three games without dating more specific than the year, which Takemiya played as Black against Kiyonari Tetsuya, Kobayashi Satoru, and Yo Kagen.

Putting those aside, the first time we see it again Takemiya is using it, very unusually, as White. This game was against Yoda Norimoto in the 23rd Meijin league, the title still being held by Cho. This is the only time it was ever used professionally as a white opening.

This game shows the introduction of a new joseki into the opening, which Takemiya uses in both corners. Black’s life and death in the centre came into question and he was forced to win a ko, eventually losing by 1.5 points. 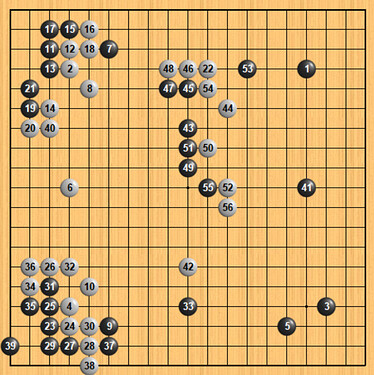 Takemiya continued to employ the formation in the Meijin league, next against Kataoka Satoshi. 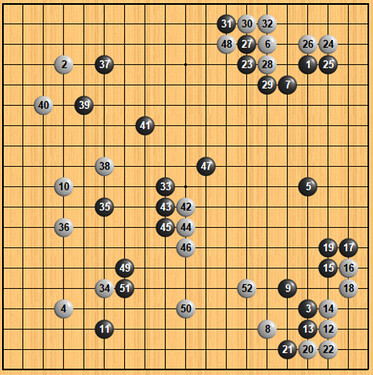 Takemiya spices things up a bit by experimenting with the approach (11). Although White initially seemed relatively healthy in the centre, his group was eventually cut and Takemiya was able to take a large area on the bottom side, winning by 9.4 points.

Continuing his winning streak in the Meijin league, Takemiya came up against Kobayashi Koichi, who held the Tengen title at the time and was one of the strongest players in Japan.

Takemiya played a characteric novelty (19). After some discussions about sente, White was able to take tengen. Kobayashi played in his typically quiet style calmly connecting in the centre and not permitting Black to attack. As a result, a counting game developed in which Black was able to make a large territory in the lower centre and won by 3.5. 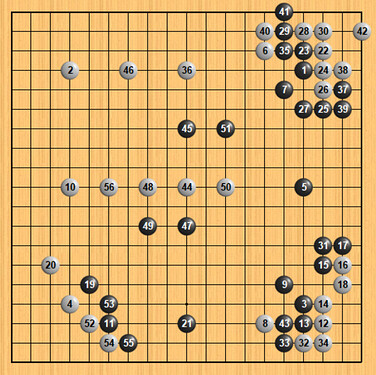 Its next outing, less than a week later, was again against Cho Chikun, in the Ryusei, a lightning tournament. Takemiya, by the way, never won this title. This edition was the 7th Ryusei, eventually won by Kato Masao.

Cho Chikun showed a new idea for White, the initial rejection of Black’s offer of the 3-3 points. By backing off with the high keima at (10) and (14), he was able to maintain side access. Later he returned, as shown in the diagram, to take the corner territory anyway. Cho won by resignation. 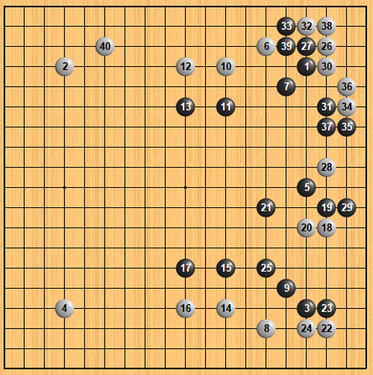 In the summer, Takemiya played it against Takao Shinji, in the 24th Tengen league.

Takao developed Cho’s idea of high extensions to a greater degree, playing much looser ones. However, after Takemiya had established his position on the left side, the relatively inexperienced Takao – who hadn’t yet won his first title, the 60th Honinbo in 2005 – was unable to prevent Black from forming an irresistible moyo on the right. White was able to sacrifice the (42) stones for some profit in the centre, but it wasn’t enough and Takemiya won by resignation. 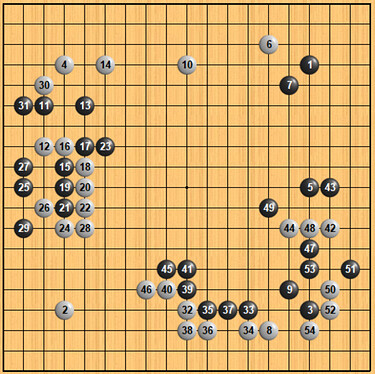 Takemiya’s interest in the double-kosumi sanrensei continued strong into 1999. Its first appearance in that year was against Yoda, in March, in the 46th NHK Cup. There is an undated game from this year, against Yata Naoki, which I’ve left out.

I get the feeling that Takemiya was off his game. However, Yoda was probably also on good form as he went on to win the Cup. (12) was an especially good new idea. White won by komi, which was at the time 5.5. 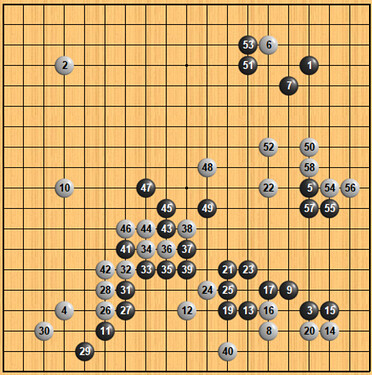 Takemiya fared better in his next attempt, against O Rissei in the 24th Meijin.

For the first time, he rejected the moyo-making press in the lower right and played, indeed, the more territorial footsweep on (21). A more piecemeal game developed, which became very close. Takemiya lost by a half-point. 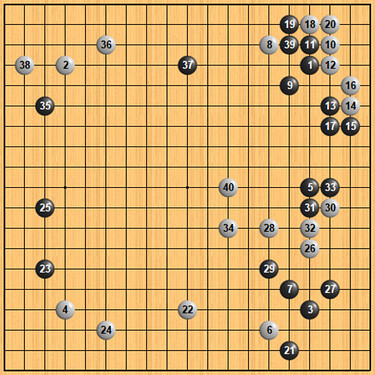 However, Takemiya was back to big moyo in this game against Ryu Shikun, establishing a huge central claim with this symmetrical opening, playing tengen on (31). He was, however, beaten by 7.5 points (two points on the board).

I intended to continue detailing the games played until the double-kosumi sanrensei disappeared in 2003, but I’m getting worn out so let’s end on this pair Go game.

This a game of Takemiya (48) and his Go partner Osawa Narumi (23) – who had only become a professional the previous year – against Kataoka (41) and his partner Umezawa Yukari (26), advisor for Hikaru no Go, played on 12th December 1999.

A celebration of the millenium?