What exactly does blocking a user do?

I imagine that it blocks messages, challenges, and invites from that user, as well as preventing that user from accepting one’s challenges? Is that correct? I would also imagine that this does not apply to ladder and tournaments?

Recently, I’ve had an issue where some random users would send me friend requests that I declined, but then it seems that they continued to send additional friend requests that I had to further decline. Is there a way to automatically prevent/decline future requests? Is blocking to only way to accomplish this? Or should I message them to request that they stop? Should the issue be escalated to a moderator report?

I’m a bit hesitant to completely block a person just to stop their friend requests, since I don’t want to necessarily prevent them from accepting my challenges in the future.

I also had an issue where I got multiple invites to join the same group, each time I declined, except for the last that I accepted (but then soon left). Is there a way to block invite requests from groups?

Also, when receiving invites to the group, I could not see who sent the invite. Maybe each invite was from different users, so I don’t even know who in particular to communicate with or report if the issue had persisted.

I think that you can X out requests from groups. As you did not decline, the group inviter will get a message saying: You have already sent this user a request, or something like that.
As for friends, I don’t know.

Yes, I did decline invites multiple times from the same users/groups. However, I continued to receive invites even after declining each time. Maybe for the groups, each invite was from a different user, but I don’t know who was sending these. I was wondering what the best way to block these invites would be.

Blocking someone actually opens up a sub-menu where you can “check” block messages, block games, or both. Feel free to test it out, you can again cancel these blocks the same way. It does not affect friendship nor group requests unfortunatelly.

Regarding the friend and group requests, HHG is correct, let me just elaborate on it a bit. On any requests, there are two big buttons (accept/decline) and a small “ignore” button on the top right.

) can invite again. There is no limit on subsequent requests that I know of. If you click ignore the request will never bother you again. But you cannot be re-invited for the friendship nor group, so carefull about that :). I actually think it is not fully intended, but works in your favour sometimes.

And if you suspect the user is being intentionally annoying, it never hurts to report.

Thanks for the clarifications, @AdamR.

I think I now understand the following

It seems that clicking on the “grey X” is exactly what I was looking for.

But you cannot be re-invited for the friendship nor group, so carefull about that :).

I believe this is slightly out of date. @yebellz I immediately avoided the repeated group invites by closing the notification (grey X) but the option remains available on the home page: 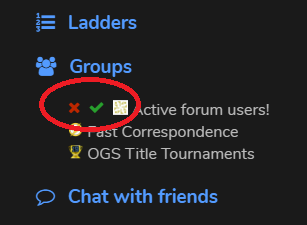 Leaving it like this prevents future invites for that group. At this time there is NOT a similar feature for tournament invites or friend requests so be careful closing those notifications.

Did you know that you can still have these invites like that while you are in the group?

It’s a bit random, but I think I have 5 or so groups that I am in and invited to.