Variation for this hane? 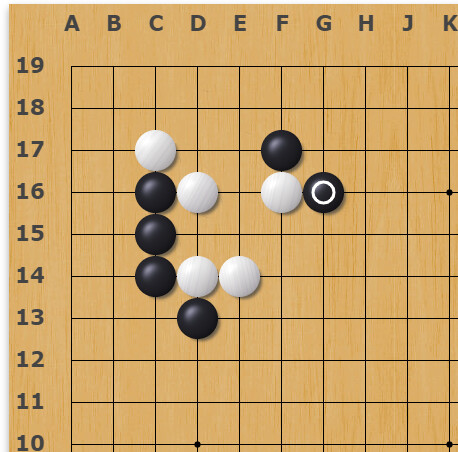 I’m white* I faced this variation in this game. I know that it’s not the right continuation but i didnt mange to penalize my opponent. How should I encounter this?

(and i didnt play well after that partly because im asking here :P)

What do you have against the katago suggestion E17 ? In the game you crosscut but your shape is thin, just consider black D 15

@Kyute_I_of_Ogs-Chat: Like you, I first thought of the cross-cut, but then decided E17 would be better (happily I found that KataGo agrees). Black is left with a baseless group, and White might be able to pressure it with moves like K17, depending on how White replies.

E17 looks like a double-purpose move to me. Take a liberty from the F17 stone, threatening atari and capture next, while also protecting against the valuable B17 hane Black could play. You don’t want B17 being sente. Corners are nice.

Crosscutting gives so many ataris to the opponent. First E16 is atari, then D17, then c18… They’ll end up with a ponnuki.

Connecting to make bamboo is inefficient because it still lets B17 hane be sente for Black; same with going up at f15 to make a mouth shape.

Finally D17 connection would be more or less a worse E17, a more passive version that protects the corner but has a weaker continuation towards f17 stone.

I was thinking that if i play e17 black would have b17 and i wouldnt have a base ._.

Good point, b17 is still sente.

That’s where the continuation towards F17 stone comes in. You can capture F17 and have a base and solid shape. Josekipedia (should be the link to that position)

This makes me think maybe I would want to D17 at times, to get rid of B17 completely but I’m sure strong players would frown.