In many cases I play 9x9, picking a short game among the one proposed.
It happens from time to time that I click on a game, but it says “Challenge does not exist” because someone else clicked on it just before.
But a few minutes ago, something extraordinary occurred. I clicked on the game to play against Diego Ushuaia but the game displayed was between Thomasjontichy and Diego Ushuaia, and I was indicated to have one move to play (the black disk top right).
I refreshed, the black disk disappeared, but I could still see the game on going https://online-go.com/game/24460799
I clicked on my name, and I could see the same game on-going among my own games, as if I was playing it (screen shot attached). 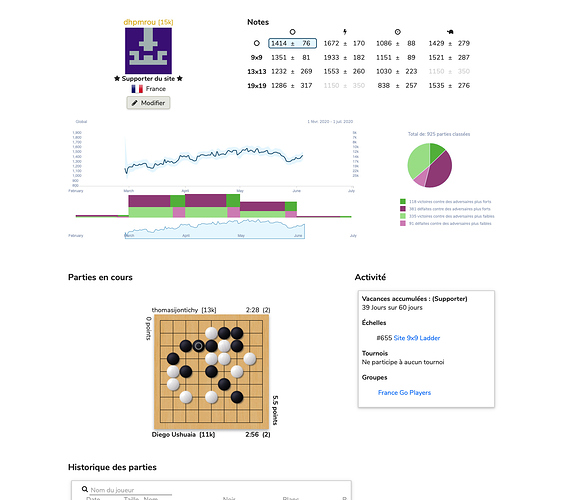 At least you won

Did you try placing a stone? I’m wonder if you would’ve been able to.

Aha, I did not try, this would have been fantastic!

It would not have worked, while the client got confused into thinking it is in a game, for the server you would have been just a spectator

Similarily the two player would not see your chats until the game finishes.

Thanks for letting us know, we know about the issue, but yeah, it is quite rare

(so at this moment our developer is hunting the more regular bugs).

Maybe not very rare; it’s happened to me at least twice already…?

Well, fair enough, let me rephrase - it is rarely reported, so possibly peole don’t find it troublesome enough to let us know, or something changed recently to make it less unlikely.

The two cases you are talking about, were they recent?

Recent-ish? Within the past 4 weeks?