So, this is an easy one: https://online-go.com/game/17844231
Only 27 moves and then I gave up because 1) I am pretty sure I was in a losing position and 2) the position did not look inviting to try doing something “fancy” either.
It’s not a very interesting game to review, but it’s typical for the sort of games that after 10 moves or so, I have already lost all motivation to go on. First of, it’s symmetrical, which seems very boring to me. Secondly, I have no idea “how to think” in these sort of games. Attack? Defend? Yes, I know: first urgent, then big moves, then connect. Well, I don’t see anything urgent (apart from the attack in left-bottom), big moves will be cut, and it’s not very appealing and connect leads to small territories. The reason I post this is because in some games I can come along fine, but this game is a typical example of having no clue and my own boredom being my biggest enemy. How to make this sort of game exciting?

Have a look at Kim Myungwan’s Principles of Go. The relevant part is below:

Attacking - know why you are attacking; set the aggressiveness of your moves appropriately.

Invading: there are a few ways to save your stones. In order of preference, order of exploring possibilities:

With these middlegame principles in mind, here’s output of Minigo: 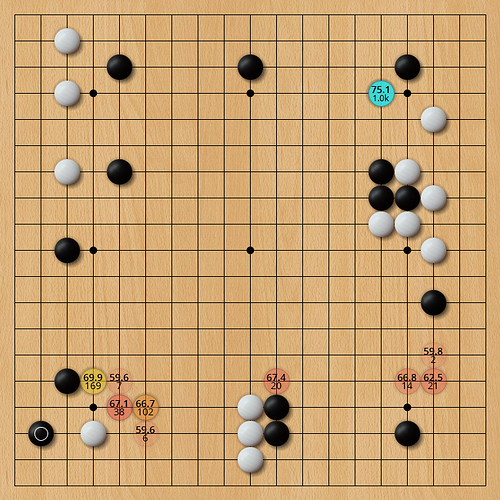 In sum, don’t be discouraged! Review the middlegame principles and you will feel more confident after the opening.

Suppose a game takes on average 250 moves. Suppose there are enough opportunities for either player (assuming equal levels) to make enough (comparatively worse) mistakes to allow the other to take the lead after every set of 27 moves. You’d still have 8 more opportunities to turn the game around.

The best advice you can get is to never resign a game before 150 moves. Especially if you’re around 17k.

This is a good reminder for me that so much of go is in the eye of the beholder. When I looked at your board position at move 27, I saw it as a very exciting game! Black’s B3 is trying to inch into white’s corner, so that needs a pretty urgent response, but I can push up with D5, create a secure framework for the corner by exploiting black’s cut points, AND exit in sente (that gets me excited, anyway).

But the REAL tension for me in this game is black’s potential for a huge framework at the top - that must be disrupted at all costs. How can I best extend my upper right framework from the R15 stone and disrupt that moyo before it happens? Maybe I can try and trap / chase those 3 black stones on the P and Q lines? And maybe if that fails, perhaps black’s stone at Q17 will get outnumbered and I can get more out of the upper right corner?

So yeah, for me, the thing that worked was focusing on the following:

STAGES OF THE GAME: Your strategic focus needs to be different in the Opening, Midgame, and Endgame. I find the transition between the Opening and Midgame especially tricky because you have to switch from Corners > Sides > Middle thinking into paying attention to center influence and doing big moves to consolidate far-away frameworks into larger ones using direction of play. If you’re finding that you’re struggling to do risky invasions every midgame/endgame, it means you need to learn to work on your opening and that transition. (Side note: to me, this actually seemed like a really well-played balanced opening, and I’m surprised you got discouraged and gave up so early! Definitely work on the Opening -> Midgame transition)

DIRECTION OF PLAY AND MAINTAINING SENTE: A lot of people take strategies from the Opening into Midgame and continue to focus on grabbing territory when they should be thinking about gaining center influence and disrupting / approaching big frameworks. Alternately, they might make what they think is an aggressive / invasive move, only to find their opponent ignoring them, and making an even bigger attack.

A big part of this is stepping back from individual fights between frameworks, zooming out to see the whole board, and getting a rough sense of where the game might go in the next 10-15 moves (i.e. at move 27, your biggest danger is black securing the top with a huge moyo, etc). Once your lower left corner is secure, you HAVE to address that somehow!. So you start thinking of the most sente move you can - something where your opponent has to reply to your attack rather than tenuki and play somewhere else. If your attack can do 2 things at the same time (i.e. threaten black’s top while also threatening to surround those 3 center stones) then you’ve got your opponent running on 2 fronts, and you can maintain sente longer.

Don’t get discouraged if some 2-3 stone exchange leaves you in gote. Just wait until you have sente again, and keep working those gaps and cut points. I mean, right now there are huge, cut-able gaps between Q17, the group and P13, and the stone at K17. Whichever part black defends, white can still string together a set of sente moves and do some kind of damage to either invade the top or try to surround that 3 stone group.

Being able to maintain sente in these situations is huge. The way I think about it is - if you can reasonably predict your opponent’s next move, it’s like you’re getting 2 moves for the price of one. At every step, try to find the move that will force your opponent to respond the way you hope they will, and always have a follow up move ready to make the most of the opportunity you created. In the back of your mind, have a short range plan (3-4 moves ahead) as to where you are hoping to extend to, and have a backup plan for what to do if your opponent responds the opposite way (i.e. if your opponent secures the top, surround those 3 stones - if they run the 3 stones to the left, invade the top, etc).

Do not call board positions boring, there is so much complexity to explore that you are doing yourself a great disservice if you approach the game that way.

Well it always helps to learn the traditionally established order of priority for moves in the opening.

learning this will help you to decide how valuable a certain move in the beginning is.