Sometimes I like to play 9x9 blitz just for fun. I don’t restrict ranks (I do put no handicap, which will become relevant shortly) - because I figure it’s just a quick game, I don’t really mind who I play - and if I restrict the ranks I’ll probably be waiting longer. However I’ve noticed a weird trend. My account floats between 3 and 5 kyu, and a disproportionate amount of the games I get are from people 6 kyu and weaker. I did some quick maths and I found that ignoring repeat games from people who were looking for revenge, over 3/4ths of my games were from people 6 kyu and weaker. Games with 10 kyus made up nearly 1/5th of all games. Now, this isn’t something I mind - after all, these are just quick games for me. But it does strike me as odd that I have so many weaker players playing me. Obviously, some of it is borne out of the representation here on OGS - I know we don’t have that many strong sdks and dans. Nonetheless, I figured that a reasonable number of them do exist, and that games against 3 to 5 kyus (roughly my range on this account) would have the highest frequencies. In addition, although perhaps this speaks more to me than it does to these players - ladder anxiety would often stop me from playing someone significantly stronger with no handicap.

Have a shoddy graph to go with my quick data analysis. 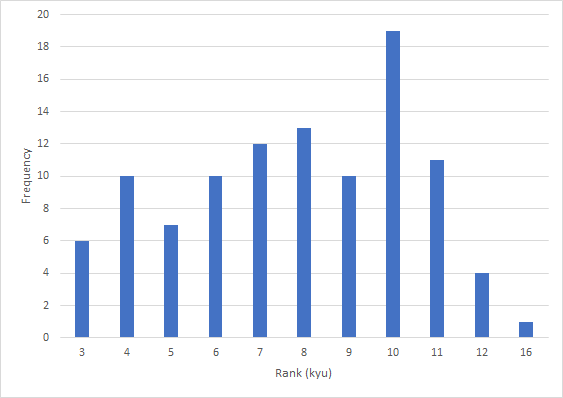 Rated. That’s a fair point actually - I forgot to mention that. I suppose psychologically, you might think that a quick game where you could gain a lot of glicko might be worthwhile as opposed to a longer game.

As you get stronger you’re less and less likely to find stronger opponent than you’re to find weaker opponent. That’s my experience as well. Additionally note that 9x9 is more popular with weaker players than stronger players. Some time ago I decided to play 9x9 seriously and found that it’s impossible to find dan players for live 9x9 (to be fair, strong sdks who play 9x9 seriously are damn strong).

I’d recommend trying playing unrated to see what happens. You’ll get 25ks joining and such, if I remember correctly.

It might make sense if it happens to be the case that there just aren’t as many player above 6 kyu than below 6kyu.

I imagine @S_Alexander can answer questions on it

Then again though, the data could be different if restrict to players that actively play 9x9?