What does Adblocker block on OGS?

This is maybe not exactly a “support” question, but I have Adblocker and it shows (as of now) “183 blocked”.
I think OGS doesn’t have ads, and in any case when I turned it off I didn’t see any difference, so I’m curious, what does it supposedly block?

maybe background scripts and trackers? it should be able to give you a list of the elements it is blocking

Which adblocker do you use? It’s not going to be easy to tell what’s being blocked without looking at what it says—I didn’t even know there are 183 separate things that could be blocked on OGS without breaking things. 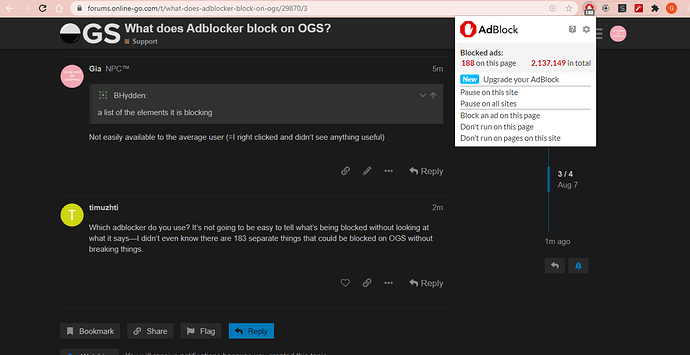 Yep, it seemed a bit excessive for a forum, I’ve never had it block so much stuff in sites that are not chock-full of ads.
BTW it’s not new, I just happened to ask now; I mean, it’s not something that occurred in the last few days.

Besides images there is not much 3rd party content to block:

The only 3rd party to block is Google analytics.

I haven’t noticed a difference in images, and it stayed exactly the same when I disabled it.
No idea about analytics, so

Not sure what adblock you’re using, but Ublock Origin doesn’t show 188 things to block.

You might want to look into what that adblocker is, who made it, etc… it’s a little weird to be flagging that much stuff.

It’s AdBlock, the red hand thingie in the screenshot.

what that adblocker is, who made it, etc… it’s a little weird to be flagging that much stuff.

I wouldn’t know what to do with that info anyway.

It hasn’t caused any problems and it’s easy to use in the sites that I need it. Honestly, it was more of a curiosity thing that I asked about it.

OK, I’ve found something that might cause this. With what is probably EasyPrivacy list, if the Google Analytics script gets loaded then it will run normally, but if it makes any request, that gets blocked, and every time you navigate to a new thread the count would increase. Maybe what you’re seeing is because the count doesn’t reset unless you refresh the page. When I closed Chromium and reopened it though, I could no longer reproduce the effect because the script that makes the requests no longer gets loaded.

So what I think is happening is some filter list is blocking requests from a script that’s running, but the script itself either isn’t blocked or is cached from a time the filter isn’t enabled.

I see, it’s something that doesn’t affect what I see, more an under-the-hood thing.

Thanks for taking the time to experiment.

I think those numbers (on many ad block software) are often quite exaggerated to make it seem like the software is holding back a massive flood of ads, when it often might just be some harmless analytics stuff. For some tools, that counter might go up each time it blocks the same thing, and it is probably counting each individual piece of third-party content.

On my profile page, I have a visitor counter that works by loading an image from a third-party. However, I’ve noticed that some ad blockers even block that.

Another user (=me) confirming: with ublock origin I only see 2 things blocked: google analytics and google tag manager

On my profile page , I have a visitor counter that works by loading an image from a third-party.

I love the marquee text

Just saying, if you happen to go to yebellz’s page, it might block the visitor counter at the bottom.

Nope, still see it in all its glory.