This question comes to my mind while i was solving cho chikun’s life and death problems.
For instance:
[https://online-go.com/puzzle/2861]In this puzzle it is black to play and the answer is A19. But is white dead?After playing A19, If black wants to remove white stones from the board, after black’s surrounding it the position leads to seki.
So is it better to leave the white group with one eye and count it as dead? Are the groups with one eye counted as dead but they can not be removed from the board?https://online-go.com/puzzle/2861

T1 leads to local seki but B can force a bent four in the corner, which is considered dead by convention under Japanese rules. As in, you don’t need to spend any more moves inside your own territory, it’s dead.

As to whether b has to spend the moves to force the L shape,… you’d have to ask Robert Jasiek or some other rules expert.

how can T1 lead to a seki? The answer is T1. ( or A19 you know what i mean the website mysteriosly changed position)

You can turn of the board flipping by clicking the icons under the problem description.

A19 leads to local seki, but if black’s alive on the outside and white has no ko threats, A18 will kill white after D19, B19.

I’m not sure you understood what I wrote.

However, we can imagine the endgame where there are no ko threats left for w. B could forcefully kill white by taking all its outside liberties, then playing S1 to produce the L shape. W takes, B plays T2, w has to play T1 to have a chance to make life, b plays S1 again, putting w in atari. No ko threats means w can only pass, b could take, killing white.

However part 2: bent four in the corner is dead as per the Japanese rules, so black would not have to play the stones required to remove white’s stones off the board, since the bent four are considered dead by convention. I am repeating myself.

If the overall position is decided with a ko, how can bent four shape be counted as dead from the beginning?

In the case of the bend four in the corner, it’s a “temporary seki” because it’s only seki if white has more ko threats than black. Once black eliminates the ko threats, it’s dead because white can’t take the ko.

White cannot force a ko. If black leaves white with one outside liberty and tries to create the bent four shape immediately after, it’s a ko. If black takes all outside liberties and then creates the bent four shape, it is technically a ko but black can just make sure that in the endgame there are no ko threats big enough for white to play that ko.

Again, white can never force this ko, it’s black who can. Therefore, any intelligent black player would leave this situation alone after playing T1. In the end, if black is comfortably ahead, b can make it obvious that white’s shape is dead by initiating the “ko”. White will have no threats because intelligent black has made sure that he leaves no threats big enough for white to be able to play this ko. Result: white dies.

And still: since white cannot do anything in this situation and black can force a kill, the L shape and shapes that can be forcefully reduced to the L shape are considered dead according to the Japanese rules.

If that is still not clear enough for you, look here: https://senseis.xmp.net/?BentFourInTheCorner

To answer your question, a group is alive if it encloses at least 2 independent empty intersections. A group is dead if there exists a legal move sequence that forces this group to be removed from the board.

I wish i can be that ‘‘intelligent’’ side. lol
Thank you very much. I got it. So in general death means groups that can be forcebly killed = removed from board.

But why bother filling your own area? hmmmm (slowly walks away lol)

I can understand life for white or death for white parts. But i can’t see ko. Where is the immediate ko after T1?

ok got it thank you. cheers. peace.

hmmm yeah.
This cho chikun’s book… i solved 40 questions correct without knowing why they are correct. I will rethink every question with this insight you gave me smurph.
Feels like it needs more description - explanation this book. But i don’t care. I have Mr. smurph. He is patient enough even for me jajajaja

Solve tsumego without clicking through. Solve them in your head. Only click to verify, if you’re absolutely sure you got the solution. “Getting them right” isn’t the goal of tsumego practice. It’s increasing the number and complexity of moves you can imagine (controlled hallucination).

Yes sir i am solving them from pdf sir.

In this situation, the bent four could live in chinese rules. 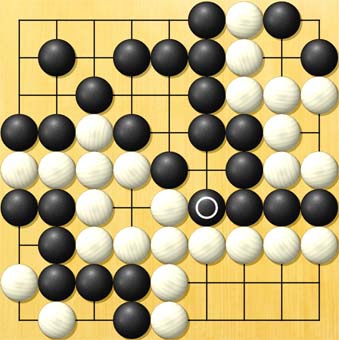 Because white is unable to remove the ko threat in the upper right corner. In this instance, the japanese bent four seems unfair.

I am pretty sure that definition of “Dead” is that you can demonstrate capture of the group if asked to do so. There are of course some exceptions like bent 4 in the corner which japanese rules just mandate is dead

Even if forced to be dead in Japanese, I would make the opponent fix all possible ko threats on his end before I would be willing to end the game, especially so, if losing the corner but getting ko compensation from some cut that normally would not need fixing but serves as a viable ko threat, would make a difference to the result. Not sure about whether the opponent has to do that in Japanese rules, though I think it should be so, since even though it’s a guaranteed death, it’s not a guaranteed FREE death.

However since you can fix all your possible ko threats in Chinese for zero point reduction, I guess the Japanese ruling of an automatic kill seems reasonable, to provide zero point loss and matching Chinese.

I’m only 13k, can you explain where there is a bent four in the corner on that board? I don’t see it.