What is AI trying to accomplish?

The AI really wants to play M13 at the end. I see no way how that play can threaten the corner or make points

Can anyone explain what AI is trying to do here? Is it about getting sente or creating a ko-thread?

If black plays there it actually makes a seki in the corner. 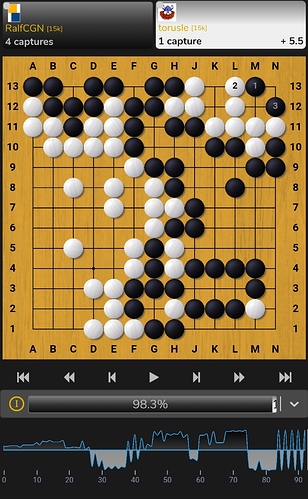 Well black could capture the two stones, but would need to sacrifice the three stones right?

It doesn’t feel like a seki in the basic sense of two groups trying to capture each other, but genuinely can’t.

It’s more like the hanezeki examples where you could capture and trade groups, but it’s not advantageous to do it.

How is this seki? isn’t black just dead? White can kill the two stones if it wants to.

If white plays M12 to capture the two stones, black plays either k13 or k12 and white can’t capture that new stone because it’s a snapback.

So they would lose the three white stones on the left, giving black 6 points, and would have to capture the two black stones for 4 points.

“I don’t want to play this move, you can’t make me capture those stones.”

and Black genuinely can’t make them. Black can’t play M12, and they can play K13 or K12 which forces white to capture and it looks more like a seki that way. (one eye for white and an eye for black at N13).

Actually… “It doesn’t cost anything to put that stone in by black, since white had to answer, by putting in a stone as well.” is my first thought - but isn’t there something in japanese rules that says eyes in seki don’t count as points?

What about White in this example, who has a two point eye-space vs the one point eye-space of Black. I always thought these eyespace things would just cancel each other out…

It’s Japanese, so the possibilities are:

Based on the above, if black plays in there first, seki is the best white can get.

Also, Seki eyes are nothing in Japanese, Chinese is the one that scores stones and eyes in seki.

In Japanese rules eyes in seki are not points even if they are different sizes. If black plays to make this seki, white’s choices are that nobody gets points, or white plays to kill the two black stones but loses 3 stones in the process. Either way, white loses the game.

edited
I understand the seki business and the possibilities, listed 1,2,3 above.

I guess I was surprised to see an example with different sized eye spaces (that aren’t filled in like with big eye vs small eye sekis usually in the corner).

The one thing I was confused about is that looking at BHydden’s picture - if white passes say and Black plays k13 and white plays k12, Black loses one point in japanese rules right? As it stands they’re (k13 and k12) not counted as points in japanese rules, so white just gains a point from capturing.

On the other hand white could play k13 or k12 without losing a point to remove a ko threat at some point.

It’s interesting to know these things, because if you played it as a ko threat for instance, it’s good to know if it’s a free exchange or actually loses points.

Yes, black would actually lose one point by throwing in under Japanese rules (but not Chinese rules, since in Chinese rules there aren’t special rules about eyes in seki).

For some kinds of more complex sekis, particularly ones with multiple groups, you can also find more cases where one player would have an option to collapse the seki and kill something but have it be unprofitable to do so because it would cause other stones to die. The Japanese rules pretty sensibly declare these situations seki, so if the trade is actually desired, a player must play them out during the game. You don’t get to claim some groups as dead “for free” at the end of the game just because you could collapse the seki, if it would cost you other groups.

So yeah, that’s how it works. If killing something would require something else of yours to die (and not just in a temporary way, like filling in a big eye repeatedly with stones), it’s a seki if still left at the end of the game, unless the method by which the something else dies is ko, in which case nevermind, it’s not a seki, you do get to claim the opponent is dead without playing it out or paying the cost. Japanese rules are a bit messy.