Yes, it can be used as a ko threat, but it cannot be used infinitely. After black responds to that threat, the position is different, since it is a three move cycle, and white eventually needs to be able to make another free move there to restore the position or lose the entire corner.

An infinite source of ko threats is quite different, e.g., a double ko seki.

Eventually white did try to kill.

What did white actually do? Send two return one? Or did they make a greater blunder?

yebellz, isn’t it only a single threat to send two? Because when black answers the threat, if white answers locally (to preserve the seki, and the possibility to play another ko threat), then black will laugh and win whatever the ko is. If white does not answer locally and continues the ko, the local position is either black alive if black moves, or white can reestablish the seki by moving again.

What did white actually do?

T1 then T3 trying for bent four, probably mixed it up with similar shape: 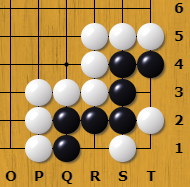 And that’s 4k. Even though they might’ve played not in their best shape or something. My point is that comments made by the opponent are a bit out of line.

You’re a 13k, you can count liberties.
You knew what you were doing

You can get some even stronger players who might not know some “well-known” features. Because knowing the quirks isn’t strictly required to being strong.