Hi,
Please check this game : https://online-go.com/game/25557738
Note that I’m not complaining about this player he was obviously in good faith, but he could not believe I was myself.
After we passed twice, I thought the bottom left group was seki, he thought it was dead. Then I say let’s play it out (which so far seemed to me the correct procedure), but then he says I should play first. Obviously if I thought it was seki I don’t want to play first. And if he is certain it is dead it should not matter to him to play first.
Finally he did play, and he was right and I was wrong the group was dead, fair enough, but he kept arguing I was shady playing, while I thought this was the standard procedure.
Please advise.

Actually that was not seki! black wins the capturing race by 1 liberty xd

I know it looks kinda weird, but thats classical “one eye versus no eye” situation

It was not seki indeed, the point is not about seki or not seki, it is whether it is wrong to ask the player who think it is not seki to play it out

Under Chinese rules there’s no point loss for “playing it out”. Which is why it’s comfy for bots.

Even if the game is Japanese rules, it’s possible to play out the position in a forked game.

Oh right sorry, i missed the point of your message.

Since the game was under chinese rules, there was no harm of filling those liberties. But about whats the correct etiquette i cant say, OGS does implement situations like this a bit badly. Normally on real board you would play a variation till you’re both satisfied, and then go back to the situation where you both passed and game had ended, but sadly that doesnt work on ogs unless you start doing serie of undos.

Given that this game was under Chinese rules, the correct procedure, in the case of a life/death dispute, is to play it out. In such a case, the burden of proof lies on the person claiming death to demonstrate the capture. @dhpmrou did not do anything wrong.

In a Japanese rules game

Why do you say that? This was a Chinese rules game.

AGA does not use territory scoring. It is effectively area scoring, with some bookkeeping rules (e.g., pass stones and white plays last) to allow for determining the score via territory counting, however, the procedure of playing out any life/death disputes is similarly used.

Even if the game is Japanese rules, it’s possible to play out the position in a forked game.

Well, not quite. The life and death confirmation during Japanese rules also uses special ko rules, which need to be kept in mind. It’s not simply a matter of playing it out and then reverting the board position.

Sorry how do you see it is on chinese rules ?

Are you asking me? I already said, that under the Chinese rules, you did the right thing.

It’s under “Game information” in the right hand side menu.

By the way, if this kind of thing happens again, you could also use the “Call moderator” button for assistance.

When playing area rules (Chinese, AGA) (this game was Chinese):
Ask to continue playing, maybe add that since the game is area rules, there is no penalty for playing extra moves. If the player objects, consider “Call Moderator” from the menu on the right.

When playing territory rules (Japanese):
This is much more difficult, I recommend first spending a bit of time explaining your reason for your claim (e.g. group is dead, group is seki). If it seems there will not be an agreement, I recommend “Call Moderator” right away. The procedure to resolve disputes in Japanese is difficult because it is all about hypothetical play. If you actually continue the game and place stones, there is a point penalty. No Go server I know of implements a hypothetical play system, so that’s why I recommend Call Moderator to help.

ETA: This type of question comes up a decent amount, is there an official OGS help page somewhere that gives advice on what to do, similar to what I posted above? Then we could link to that page when the questions come.

One of the reasons I always use area scoring. “Go ahead and kill it if you can. If not, then it is alive.”

Thanks for the tip on Game Information I had never noticed.
Thanks for the detailed information. I did search for it but could not find.
Actually my games (and most other people’s) are under japanese rules, I did not notice this one is with chinese.

For future reference, one fast way you can tell that it isn’t seki is because black has an eye and white doesn’t.

In recent game against 4k my opponent was confused about this seki. So it’s not only DDK problem.

Unfortunately, my opponent wasn’t communicating so we awkwardly passed and resumed a couple of times and played some passing moves. Eventually white did try to kill.

Its much easier when you can talk to your opponent and figure it out. 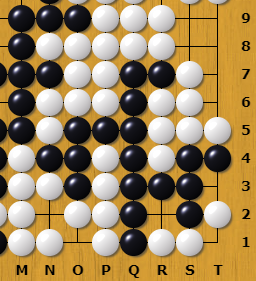 In the course of moderating, I’ve seen this seki motif (the back-and-forth capture) several times before. So it is well worth knowing.

At least in the above case white could fill T1 right and it’d still be a seki? Then there really would be no extra moves playable there without one side living with points. (Actually is T1 a point for white in chinese rules? I presume it would be)

The weirder one I feel is the following

where you have a kind of false looking eye but it can’t be filled in.

(Actually is T1 a point for white in chinese rules? I presume it would be)

Yes, it is hence filling it up does not change the score. Same with Japanese for that matter.

The nice thing about not having T1 played is that T3 can serve as an infinite unremovable ko threat.

It’s not really an infinite ko threat. It’s sending two, returning one, where cycling it costs a point, and white needs to play again to restore the position (since it’s a three move cycle), so it’s not very effective as a ko threat unless sacrificing that seki is acceptable to white for winning a much bigger ko.

Actually is T1 a point for white in chinese rules?

Yes, the eye at T1 would be a point under Chinese rules.

It’s not really an infinite ko threat. It’s sending two, returning one, where cycling it costs a point, and white needs to play again to restore the position (since it’s a three move cycle), so it’s not very effective as a ko threat unless sacrificing that seki is acceptable to white for winning a much bigger ko.