What is the rule about time out now

I know there were lots of discussion and changes made. Last time I remembered, it is like the 1st timeout game will cause you to go down in ranking but not subsequent games, and if you time out in one game from a tournament you retire from that tournament. And I am not sure about what happen to the winner. Does the win count?

Is this still the rule? If not, can someone make a summary ?

And what exactly is “subsequent games”? Does it mean life time or games within that tournament or some other period?

Reason I ask is because sometimes I see people timeout in suspicious circumstances, like they time out on this game but you can see that they are playing some other games. I strongly suspect that it had something to do with the rules.

Proposition: Loss by timeout in correspondence games should not affect rank OGS Development

Thinking through this, I feel like that comment of mine was baseless and stupid… If anything it makes sandbagging harder… Although not much so…

Read post 48 by me, then post 55 by Green As Jade for summaries. If you care to, you can wade through the rest of the thread to see the whys and hows of this rule, including definition of subsequent games.

It is a bad way to handle timeouts, in my opinion, and leads to cheating the system, as you’ve experienced, andysif.

Here’s an example from today for me. 256 moves in, im up by 18 points, opponent abandons game, third in series, my “win” doesnt change my rating at all. 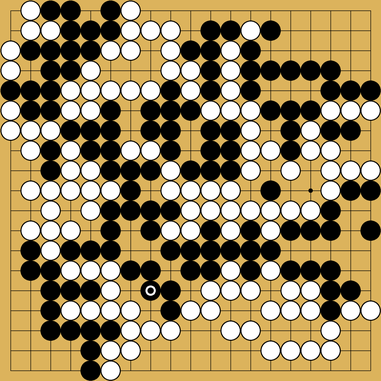 I hope you reported it to the mods. If you don’t report, nothing happens, you know.

The funny thing is, (even though I am too lazy to count properly) if white noticed the possible seki upper left and played a solid endgame, well black would probably still win, but not by much…

Do not timeout too early kids…

Mods are powerless. It’s the creators of OGS that have decided to run Timeouts using this “house rule”. My opponent is simply taking advantage of the rule. Dishonesty and lack of integrity goes unpunished with the method OGS has chosen to implement for Timeouts. This happens to me, a Correspondence player exclusively, at least one to two times a month. Since all of these are “wins”, my overall rating suffers as I get no bump for them but still have the downtick in rating for 100% of my losses.

does it really still work this way? i honestly don’t understand this rule. if the problem they’re trying to solve is timeouts distorting ratings, the rule doesn’t solve this at all. if i’m winning a game by a large enough margin that my opponent has no chance to come back, and they intentionally timeout of multiple games so that our game doesn’t count, guess what? both our ratings are distorted. makes me not even want to play correspondence.

Agree with you, gwgi. You’re right. You’ve stated well why it does not help prevent ratings distortions. My rating never gets a bump for those wins where my opponent times out, but I get 100% rating decline for all my losses. Distorted!

For those that would argue that “things happen in life where people must timeout”, then let those few instances be the ones that need to contact the Mods to explain that uncommon occurrence…rather than having the more common, rules-abiding, playing-under-agreed-time rules “winner” be the one to have to suffer or make a contact to Mods. Counting all wins as wins and losses as losses (and if someone has an atypical reason for timeout, they should contact the Mods) would immediately rectify the abuse of this OGS rule.

Are you sure about all that though? I know nothing about the issue but anoek seemed to suggest otherwise quite a while ago

Correspondence games between two players that rank difference of more than 2 and end in a timeout will no longer be rated. This change is being redacted due to pushback from the community.

In the following chat he explains that there is only some backup rule if a player timesout of all their games.

Again I don’t claim to know, just would not want you salty for no reason

or maybe I misunderstand the message, that is also possible.

Adam3141, we are speaking of serial timeouts, even if rating is same. There’s an entire other thread on it if you wish to review it (and the “proving it” discussion in that thread, which references the same link you’ve provided) Link to other thread in reply 2 here. Thanks for your input. Many having similar experiences with serial timeouts and others gaming the system (including the person that started the other thread). Thanks.

Every system is open to abuse.The serial-timeouts-as-unranked is in order to prevent a correspondence player with many games going on having to stop playing for some reason, and then timing them all out and losing huge amounts of rank. This was happening to players, and those players were carrying on under their distorted ranks and dragging down the ranks of the people they beat.

The problem is not so much in the system as in those abusing it – don’t blame OGS for abusers; if you feel you’ve been wronged, report the player with some tag like “Deliberately times out of corr games to manipulate rank” and let the moderators contact that player and decide what they will. If you don’t report the player, but you still think you’ve been wronged, there’s nothing that OGS can do about it.

OK, I have gone thru the posts and taken notes of arguments on both sides. I personally is not in favor of not counting timeouts, but my opinion weights no more than others so thats not the point here.

What I noted is that all the posts are arguments and discussions from PLAYERS, and quite frankly, are nothing more than speculations. Is there a page by the ADMIN of the site that state clearly what the rule is? Or can anyone identify the name of the admin from amongst the posters?

Well yes,
I too am saying that black probably still wins.

If it were me I would leave the seki for last (since black is probably not aware of it) and play other endgame first. (and then it’s like a two point game?) T7 for example is also quite interesting for white. It does not quite work if black sees the S3 weakness, but it is a nice idea

(I think at least)

Anyway to me games close to 5 points difference are to be proud of and not resignable (maybe I am just rude that way?) and I just thought it was an interesting position to bring up

I don’t understand what you mean. I think that you confirmed that white was definitely losing, and so should have resigned instead of timing out.

As a result of timing out, white escaped from the loss of rank, and black got no reward from winning, because white had timed out his previous game.

It’s clear that no “calamity” befell white, causing him to timeout all his games. The game he played with Tongue was simply strategically timed out after another one, to minimize loss. He continues to play other games…

Unfortunately, it is extremely tiresome and error prone to hunt these things due to the new “batching” way that game results on ranking are reported, and the lack of being able to tell when an opponent played a move. However the above is my reading of what happened in the case before us.

It’s really quite common - or at least, the whiff of it is. I don’t think it’s a good solution to the problem bugcat described, though I do agree its a conundrum.

I think that you confirmed that white was definitely losing

Well it was close actually. But yeah, obviously he should not have timed out on purpouse. I am sure we all agree on that. White acted like an ass, what you gonna do?

I just saw an interesting board position and wanted to share, that’s all.

White acted like an ass, what you gonna do?

Timing out at any point in a correspondence game is simply impolite.

However, timing out two or more in a row to avoid rank-loss is cheating morally, although within the rules here.

From time to time, I’m going to continue to ask for rules that don’t let correspondence players escape from games that they are losing, by timing out.

I am not opposing any of these claims! I just wanted to share a position I found interesting, just because I assumed it is a shared passion of all of us here. In no way was it to justify white’s behaviour and I applogize if it seemed that way or offensive in any manner.

Not offensive in any way. Distracting though. Cant you see we’re trying to argue about the rules, not look at a game

Joking aside, RedLeopard’s comment " it is pretty clear resign by clock!" is genuinely confusing. Does this mean RedLeopard thinks “resign by clock” is OK as a technique to escape rank loss? Or RedLeopard missed that crucial part of the conversation? Or RedLeopard was just agreeing that escaping is the likely motivation for a clear loss coming up?

But honestly what more is there to argue about? Obviously we do not like it if timing-out is annuling the game and Anoek knows this… But I have yet to hear anyone come up with any constructive and mathematically sound argument on how to solve the issue. To be honest I trust the man who built the whole site and implemented the ranking system over the salty people who just keep shouting “timeouts as resign won’t affect anything…”

I understand the frustration I really do, but I honestly believe it is kind of petty and the best thing to do is just report chronic time outers and get over it. (with an interesting go problem maybe?

And setting up a separate thread seemed excessive

and now I am making it even more distracting by not shutting up, So just to sum up, yes, I too agree timing out is rude and I will try to limit my off-topicing from now on, sorry.

“Resignation by clock” means that I thought white escaped because white (correctly) thought the game was lost.
I made no value judgments about that practice or about OGS policies surrounding it, I merely responded to Adam3141.