What kind of a platform user are you?

What kind of a platform user are you?

I’d self-classify as a sporadic debater.

And boy, will this poll have self-selection bias!

Cards on the table, I am skeptical of this from the start since it is type psychology, which I see as being somewhat better in predictive power than astrology.

This appears to be where the 5 types of platform users were taken from. Section 4 is simply a review of previous attempts at typing internet users, and not necessarily representative of the opinions of the authors of “A Typology of Collaboration Platform Users”.

Essentially what they appear to have done is assume that a certain three factors which correspond to readily available data exist, instead of deriving them via factor analysis. They then make a second assumption that the data points can be meaningfully grouped into types. If they can be grouped into types, that would seem suggest that the chosen axes are not orthogonal, which, if true, would undermine the entire foundation of the exercise: one needs to find axes of maximum orthogonality, not ones that seems suspiciously not so.

“For greater classification veracity the obtained clusters were modified: some of the grey, blue and green balls formed a new class of creators, the rest of the blue joined the grey cluster; also, some minor rearrangements were made.” (paper)

I can’t read this any way other than that they didn’t like the results that they got, so they fudged them a bit until they fit better with their preconceived notions of what a type system for collaboration platform users should look like.

So I don’t think this paper does anything to support the idea of Type Psychology in the first place, much less the five categories chosen for the poll.

Cards on the table, I am skeptical of this from the start since it is type psychology, which I see as being somewhat better in predictive power than astrology.

I agree with you. I did not finish reading it for the same reasons you mention.
But I was curious how forum users would see themselves. Just picked one of the typologies, but could have used another one too.

Which platform? These forums? Or something else?

If it’s these forums, I think I can safely say that I’m “active”.

It depends on the platform.

A “something in between” choice is missing here methinks. Those choices are too restrictive. As far as I am concerned I am someone that sporadically visits topics (category 1), does not create much content (category 2), I tend to use the platform to communicate ( category 3) and once I bite into a topic and start a debate I am as easy to get rid off as a cartoon bear-trap (and one could add “and equally as pleasant”

By my guess, most people ( here and elsewhere ) belong to multiple categories.

Yeah if it’s near the water in summer, I may jump.

If you were not to be labeled as active, no one would

Debaters are a more mature and educated version of socializers. Besides communication, less shallow than in the previous case

But I was curious how forum users would see themselves. Just picked one of the typologies, but could have used another one too.

Fair enough then. I have no issues describing myself as an INTJ even though I think the FFM is superior to MBTI, because INTJ happens to be a shorthand that will mean something to a fair number of people, which does a decent job of ballparking my personality. I don’t mind using these sorts of things as communication tools, as long as noone overstates what they can do.

I decided to go with “active”, though I’m not sure I post enough for that. I guess as long as I have Regular status I can’t be too far off.

Ahh, the one problem that nothing, from Type Psychology to presidential polling has been able to solve: bias introduced from the wording/order of the questions/prompts.

I think not everyone knows what INTJ, FFM and MBTI stand for.
Could you describe their meaning?

INTJ is one of sixteen Types of the MBTI personality test. FFM stands for the Five Factor Model, also known as the Big 5, which is based on factor analysis.

For those who are interested, here is the test:

And here are the 16 personalities: 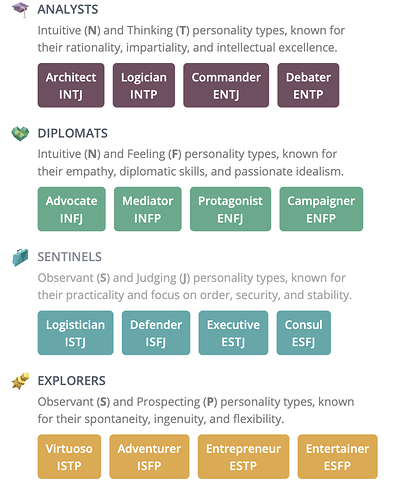 I think I used to get INFJ as a result, but it’s INTJ now. A “turbulent architect”, according to that site.

The validity (statistical validity and test validity) of the MBTI as a psychometric instrument has been the subject of much criticism. It has been estimated that between a third and a half of the published material on the MBTI has been produced for the special conferences of the Center for the Application of Psychological Type (which provide the training in the MBTI, and are funded by sales of the MBTI) or as papers in the Journal of Psychological Type (which is edited and supported by Myers–Bri...

In this thread, I will give people free horoscopes about their go playing style. To receive one, please post: Your zodiac sign (you can make this up, if you don’t want to share your real one) A link to your profile page (even though I will completely ignore your game history and just make something up)