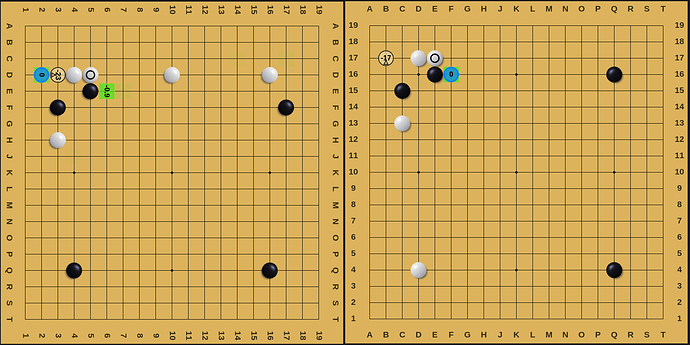 The extend is simple and good on both boards.

when it comes to the first ~20 moves, I find move percentages to be in the “wild guess” territory

The extend is simple and good on both boards.

It shows that keima is best move since extending will make your group float on the middle without a base. Besides, the white 2 stones are on the 4th line, so it’s best to keima to create a base, if white kosumi at 3-3 then you can extend.

The first board has 1 more free line on top to make eyeshape and claim territory - the slide threatens playing 3-3 point next, which is not only life but also some points. In the second board, the continuation of the slide doesnt claim as big an area - if you play c18 on 2nd board, its not nearly as big as c3 on the first board. Moves’ values and strength get determined by not just the points they make but also by what they threaten to do next. Hence the 17% difference in 2 similar looking moves.

About the -23, your e5 stone just got touched, its hurting. You gotta take care of it first. That’s why stretching’s a preferred move in both cases. However when corner is open, like with the first one, d2 becomes as valuable (or more) because your next move is 3-3 which is as big as white playing on d6 (which they would, if you omit it).

I actually understand this reasoning. That gives me hope that I can get better.