Hi- Where did I go wrong in this game? I know my weak group was really weak, but what could I have done to strengthen it? 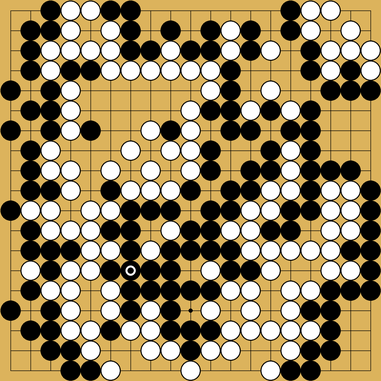 Well the ai doesn’t like the combination of 18 and 20. What do you think of it’s proposed moves?

i think the AI pretty much does a good job at reviewing
which part of it don’t you like?

i think it all started from move 10 then 12, not saying they’re bad but questionable, you had no plan

then 14,16,18,20 were all horrible follow up moves(you can look up AI moves)
instead of keeping black weak, you went and strengthen them, moves like 14 doesn’t do anything for you…
i think you try to envision it in your head, what you are trying to accomplish before playing any move
if you don’t know what you’re doing, just keep it simple
like going for corner instead of jumping out on move 10, super simple
in such variation where you just take the corner, black’s l17 will become awkward compared to m17, will most likely need an extra move to settle causing black to become gote

also instead of move 26, either k18 or AI’s choice(j18) is necessary
AI prefer j18 because it’s huge
i prefer k18 because it’s sente, and if black takes j18 later, we still can play h18, this variation is much better than in game later on

then your choice of running n14 then n12, seems insanity to me, you’re running just to run
to me the 2 stones can be saved later, not immediately
because making them super heavy and running like a mad man will only lose you game
i you wanted to “save” them, then might as well just invade corner instead or something like q12/r12 instead

You are both stronger than me, so my opinion is not so useful, but I’d like to recall Dwyrin’s advice on move 10: when pincered, go in the corner. Jumping out doesn’t bring you to any good place.

The interesting thing is that Dwyrin teaches this often - I know it too from his lessons… but… AlphaGo doesn’t think so.

This was true back in Dec 2017 when that video was made, and still seems to be true with the mid-2019 vintage network I have in Leela: she also disagrees with Dwyrin.

It may of course be that the AlphaGo choice of coming out results in something AlphaGo likes but humans find unplayable: you’d need to look at the video and recent networks and decide for yourself.

That being said, OGS’s AI thinks jumping into the corner in correct in this game. It might depend on the bigger board position… I just thought it worth noting that not everything/everyone agrees that jumping out is no good!

I mean I wouldn’t know which is better going in the corner or jumping out. I was just curious as to what people thought of the ai’s moves. I like M16 for move 18 but not sure what it leads to locally, and of course the ai tenukis so its not much help there.

even after jumping out and capping, if you had followed up something like f18/f17/g18/g17, it’s still a decent strategy, depending on how you follow up with such plan
idea was preventing opponent from settling easily

so plan it beforehand before making such a jump