Where should White play in this Joseki? 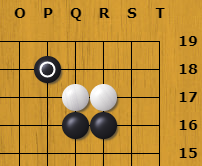 I feel like White should punish Black, but everywhere it tried leads to White get captured. I didn’t find any answers in the Joseki dictionary. Please help.

I should add some context:

Splitting your opponent while staying connected is almost always a good thing. It just means that your opponent now has to worry about keeping two groups alive vs your one. Plenty of resources on this. Maybe check out Attack and Defense by James Davies, there is a section called “Divide and Conquer”.

So, from what I’m understanding, in this Joseki you can’t make two eyes in the corner. You have to capture the opponents’ stones or connect to your other groups to stay alive.

There is often a possible fighting variation for most joseki. If you play it right, it is true that you might not get the territory you expected initially but the final result will be more favourable for you overall. I think this is your position? It is in josekipedia: Josekipedia

This is specifically a move used by Black to attempt to kill the white group.

It should only be played when Black has sufficient local strength to accomplish that goal as – like benjito said – it induces White to push out with P17.