So ordered a Go board and stones a few weeks back, was so excited when they arrived and then this happened lol… 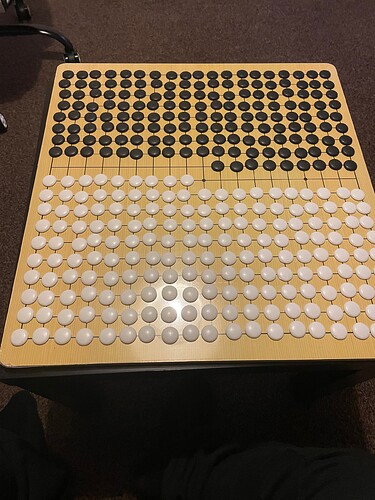 Gonna get some new stones soon, are there any trusted online retailers that anyone can recommend

Maybe you should first complain to the seller?

Anyway there are enough stones to play, you can wait before buying a new set of stones.

Definitely enough for most games. Unless you want to use Ing’s rule.

Around 250 stones, and exchanging prisoners, is enough already

Cheaper Go stone sets often have “only” 160 stones. So really I would say you have 20 extra free white stones!

Gonna get some new stones soon

Or a smaller board.

IIRC there’s some traditional difference in size between Chinese and Japanese and Korean sets.

I’m more annoyed by the gap between the stones (the stones are about ~2mm too small for the grid spacing of this board).
But if this was a really cheap set, like 15 euro or less, I guess things like this can be expected. I assume the stones are plastic?

Honestly, I’m more annoyed by you putting the line break between 20 and Black rather than either side of or

Most annoying should be Chinese stones on a Korean board.

It happened to me to see Japanese slate and shell on a Korean board. That was fun.

It was in Pisa before a live tournament.
They had some Korean sets and had already prepared tables for tournament.
Tournament wasn’t started yet, some people was still doing registration. Two players decided to play a warm up game, they noticed a nice slate and shell set (for the main table) and used that one.
At first they didn’t notice that the board was a little smaller. Fuseki and mid game went normally. But when the board became more crowded, stones just couldn’t fit.
Then they realised that they couldn’t manage to complete their game and gave up.