Who's that carbon-based living being?

Hi there!
I’ve seen the announcement for “Meijin Title Match (youtube live)” in the main page and had a look, just for curiosity.

Here is the link:

Wandering back and forth, after a little more than two hours from the beginning I’ve found these people commenting the game (I suppose) a I was struck by the girl. I like to draw and paint portraits and not only she’s very cute, but also she does lot of funny faces that would be very interesting to draw. 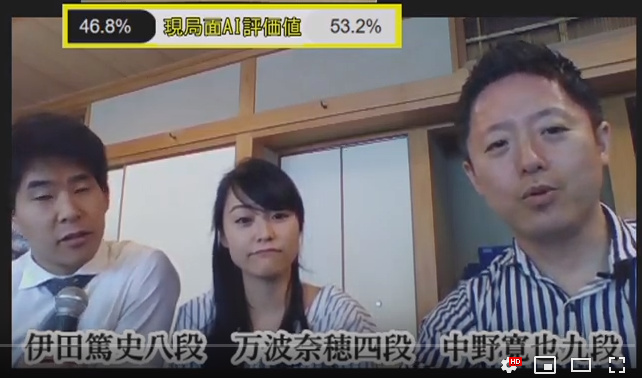 Can someone tell me her name in western language?

And talking about eastern names, how is it possible to transliterate the same name as “Chang Hsu” and “Cho U”? As an italian speaker, they look very different to me.

Cho U (simplified Chinese: 张栩; traditional Chinese: 張栩; pinyin: Zhāng Xǔ; Wade–Giles: Chang Hsu; born on 20 January 1980) is a Taiwanese professional Go player. He currently ranks 6th in the most titles won by a Japanese professional; his NEC Cup win in 2011 put him past his teacher Rin Kaiho and Norimoto Yoda. Cho is the first player in history to have held five of the top seven major titles simultaneously with Iyama Yuta being the second. Cho U, Naoki Hane, Keigo Yamashita and Shinji Takao make...

And talking about funny faces, here’s some drawing I did some time ago: 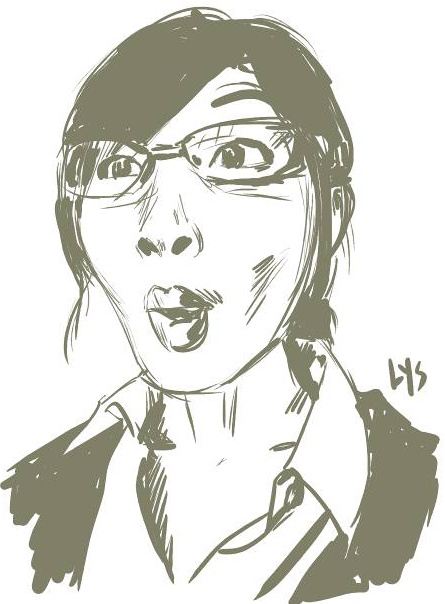 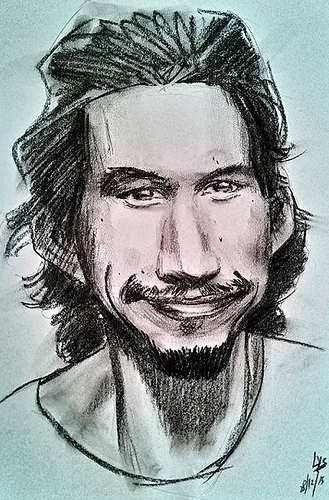 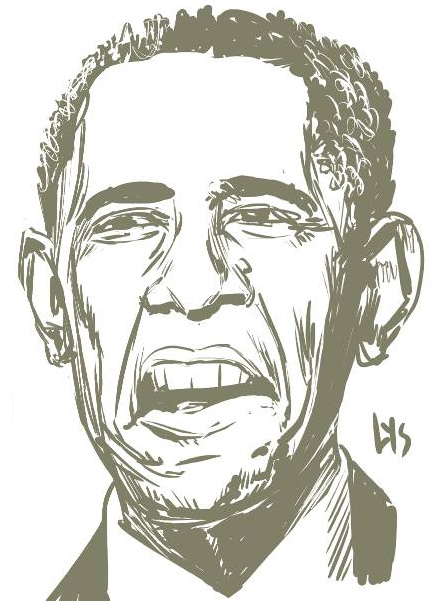 well, I’m not actually sure how “Cho U” became a transliteration – probably from the Japanese approximation. The more interesting thing is that they used the Wade-Giles Chang Hsu instead of the pinyin Zhang Xu. There’s a whole history about Wade-Giles v Pinyin which causes people who know anything about this subject a few annoyances as people as things like “why is Peking University in Beijing and not Peking?” (because Wade-Giles “Peking” is pinyin “Beijing”), mostly stemming from how any romanization will make things weird.

As for the girl’s name, quick google translation tells me her name is Mannami Nao (4p)
https://senseis.xmp.net/?MannamiNao

Thanks a lot!
So in that picture is also her husband Ida Atsushi.

“why is Peking University in Beijing and not Peking?”

Yeah. Something like that.
It sounds weird for me because “ji” is smooth while “ki” is harsh (I don’t know the right words to say that in english). So I can bare with “P” instead of “B” but “ji” and “ki” are too different for me.

I’m not actually sure how “Cho U” became a transliteration – probably from the Japanese approximation.

It’s one of the Japanese pronunciations of the Chinese characters that are used to write his name (長 is pronounced “Chou”, and 栩 can apparently be pronounced “U”, although the pronunciation “Tochi” or “Ku” is more common)

The more interesting thing is that they used the Wade-Giles Chang Hsu instead of the pinyin Zhang Xu.

I believe Wide-Giles is used often for Taiwanese transcriptions, at least historically. There’s a whole Wikipedia article about it. Since 2009 Pinyin is the standard, apparently.

The problem is that Mandarin Chinese has several distinct consonants that would all sound like the same letter in English. There’s a aspirated and an unaspirated (i.e. with a lot of air friction by making the sound or without) variant of “ts”, and a sound “s”, and each of these three sounds can be made at three distinct spots on your palate. So, in pinyin they use the letters c, ch, q, z, zh, j, s, sh and x to make these nine distinctions. For an average English speaker (or Italian, I reckon), all of these sound very similar, and not really like the sound we usually associate with those letters.

Here’s a good video on it:

That video convinced me (if there were any need) that I’ll never ever learn chinese!

If I understand correctly, Shibano Toramaru just won that game. The live on youtube is still going and Mannami Nao is commenting the game.

If you need more conviction, try watching the tone and the vowel videos as well, that’s where my nightmares start…

Actually, come to think of it, Cantonese is probably even worse in that regard

Tones aren’t even that bad, it only takes a few weeks of practice most of the time… I don’t get why they’re so overblown to be “difficult”, it’s just contours – you already practice this in most languages for emotional inflection. You don’t need perfect pitch.

FWIW, that “girl”, to me, looks like quite a full grown-up woman

<edit>
So much that I’m changing the topic title.
</edit>

I am not a native english speaker. Also my studies on english language were very casual and irregular over the years. That’s why I often recycle quotes from songs and movies when I speak english (do you remember Limahl?

This was the case too and here is the song:

It seems that “girl” can be used also for “full grown-up women”.
Also the '87 movie with the same title starring Madonna is a story of adults, not children.

And for good measure I also had a look to some dictionaries:
girl
/ɡəːl/
noun

So, if actually this isn’t offending anyone, I’d like to have my title back.

I think there’s nothing wrong with calling young women girls, however, she’s actually in her thirties. Does that still count as girl?

My grandmother (who is Dutch, like me) usually calls anybody who’s younger a ‘boy’ or a ‘girl’, frequently using it for people in their 60 / 70’s

Then again, if we’re being pc about it, why not go for ‘Who is this go player’?

By the way, in Japanese it’s customary to call younger women “sister” (姉さん), also used for older women in a flattering way

Yeah, I’m a native English (US) speaker and “girl” (and, conversely, “boy”, for that matter) is commonly used to refer to females. I think it sounds less formal than “woman”, and so (in a society like the US which tends to be much less formal in language) sounds more natural and less strained.

@lysnew asked to reply here … if I understand correctly you want me to change title back to “girl”?

So here it is: is it possible that we’re all men in this thread? Or, if we prefer, perhaps boys, like in “boys will be boys”? And we, including myself, opine about how to address or talk about (assumedly) young women …

From what I remember my linguistics courses it is clearly a diminutive to use “girl” for a (young) woman, I am not aware that “boy” is used as often for (young) men, AFAIK there it’s more “guy”, “dude”, etc., which are ageless. But nevermind, since I’m an (old) dude, this is all useless as well

Otherwise, as your question been answered, we can just as well let this rest.

I’m not a native English speaker either, so I can’t tell for sure whether it is inappropriately diminutive in this context

What I find diminutive, or rather patronizing, is to edit other people’s thread titles. It is a passive-aggressive accusation of wrongdoing and should be thoroughly justified. If you leave this to blow over now, it will certainly leave a bitter taste with @lysnew.

You did not wait for a female voice before you got offended on women’s behalf and changed the title. It looks as if you are stereotyping women as fragile and insecure.

I implore you to let people speak their mind, to be (in)considerate or politically (in)correct as they choose. If you change the words out of their mouth, you obscure the person’s true nature to those who might actually take offense.

Once the chilling effect sets in, you will never know which of the people all around you are secretly massive bigots.

By all means, speak out and raise awareness. This was just a step too far.

I think as usual with these things the answer is somewhere in between the two views. As a native English speaker I would say that “who’s that girl?” is something of an idiomatic phrase that I would associate with the song and film. And I would understand that “girl” in this context could mean an adult woman and that the post title is a jokey one. However, I would be more comfortable if the post used the term “woman” as I think using “girl” is offensive to some degree (depending on the reader) and best avoided.

you got offended on women’s behalf

With all due respect—I did not get “offended on women’s behalf”; misogynist use of language, no matter how deeply engrained in any culture, should not creep into the headlines of the OGS forum; thus I acted on that. I don’t agree that one should always wait until somebody turns up who is “rightly” offended.

I asked privately for an answer, either here or PM.
Let me say that you are acting in a very disrespectful way.

if I understand correctly you want me to change title back to “girl”?

It isn’t necessary that you do that in person, but obviously I need you agreement, since it would be very silly to start a “ko” changing that title back and forth.

I don’t need a female voice.
I need a voice that clearly states that my title was offending or annoying someone.
@teapoweredrobot said that it could be, depending on the reader. Well, that’s enough for me.

misogynist use of language

should not creep into the headlines of the OGS forum

That’s just ridiculous.
Actually I think you are acting as a bully.

You’d better just say “ok, dude, I’m sorry I went too far, please keep that title more politically correct than the original”.
Well I’m going to help that even if you didn’t ask.

This is getting out of hand. You two sort this out in PM please.