Why did I lose this game?

Hello everyone, I’m still learning GO and I don’t understand the score in this game.

Can someone explain to me what went wrong ?

You’re right, I guess my opponent saw it with the score estimator and passed several times to get the win.

The game was not correctly scored, because the position was not clear.

my opponent saw it with the score estimator and passed

Just because your opponent passed doesn’t necessarily mean you should! Only pass when you are sure there are no more useful moves to make! Particularly, be sure that the borders are closed.

@FR-AP: I urge you to report the game to the mods. It should be annulled because it is wrongly scored

What?! This game was not wrongly scored*. Given the board position at which both players agreed to score, it is entirely correct that the area on the left is not scored as white territory. The game was poorly played at the end by white in passing prematurely, but annulling games because players make bad moves is a rather silly thing to do if you want imperfect humans to be welcome on a go server.

(* Caveat, a strict interpretation of the Japanese rules actually means the black group on the top is in seki due to having dame, and therefore isn’t territory either, but the author of the Japanese rules admits this was a mistake in his formulation, so sticking to the spirit rather than letter of the rules is a sensible thing to do.)

You’re right, I guess my opponent saw it with the score estimator and passed several times to get the win.

One of my favourite quotes (which moderators should always bear in mind) is:

Do not ascribe to malice that which can be adequately explained by incompetence.

In this case it would be adjusted to:

Do not ascribe to your opponent’s malice that which can be adequately explained by your own incompetence.

Just because your opponent passed doesn’t necessarily mean you should!

And if you do pass, it’s also on you to check that the score correctly reflects your understanding of the game. If it does not, you can try to correct it (by clicking on stones to mark them dead/alive), or if it doesn’t work or if you cannot agree with your opponent, by resuming play.

After both players passed the game enters the scoring phase. In this phase both players should check if the game is scored correctly. If there is anything marked wrong or not marked at all you can correct the marking. Only if the board is marked correctly, you should click on “accept the score”.

If you are unsure, you can ask your opponent for help. If you are not able to sort it out, or you are unable to agree on what the correct score is, use the call moderator button on the panel on the right side (bottom on mobile).

This only works for sane rule sets, or if borders aren’t closed. In most cases this isn’t the case.

^^ I don’t understand that.

I thought you could resume play in almost all circumstances (and people do seem to).

What is it that makes “resuming play” not work “in most cases”?

Probably referring to using resuming play in Japanese rules to actually capture dead stones leads to a change in the score because OGS, like other servers, doesn’t implement the life and death dispute resolution phase of hypothetical play that proper Japanese rules has to avoid this. It’s a very common beginner question “don’t you lose points if you have to spend 4 moves to capture my 1 dead stone in your territory that I don’t agree is dead?”.

He got me because I didn’t see my mistake, my bad. I won’t make the same mistake a second time.

I didn’t know I could correct the marking, now I’ll be careful about that.

This only works for sane rule sets,…

^^ I don’t understand that.

I thought you could resume play in almost all circumstances (and people do seem to).

What is it that makes “resuming play” not work “in most cases”?

I think @flovo refers to the issue of play resumption (from a dispute) under Japanese rules. If done incorrectly, it could lead to a player losing points by playing point losing moves to “prove” stones dead or alive while a malicious opponent plays non-point losing moves (dame or passes). This is referred to as “pass fights”.

The Japanese rules solve this by “hypothetical” resumptions, which are rolled back after group’s status is proven. But go servers (including OGS) have not implemented “hypothetical” resumptions of Japanese rules (it seems that @flovo feels that this procedure is “insane”).
The goal of these “hypothetical resumptions” is to objectively determine the status of groups, not to add “forgotten” moves to take extra points or to close borders. That wouldn’t work, because hypothetial resumptions are rolled back. So the position after 2 passes still stands.
OGS could use KataGo to determine the status of groups when there is a group status dispute under Japanese rules. But still, you cannot use KataGo to estimate territory when borders are not closed, because KataGo would assume continued play.

By the way, no rule set “fixes” the issue of this game that borders aren’t closed. It’s just a player mistake/blunder to not close borders before passing. I agree with @uberdude that it’s strange that this game was annulled.

How would this be resolved in real life if there is a dispute about life and death? If the players simply play on until the position is conclusive, this is only one of many possible game paths that could stem from the original position and doesn’t necessarily prove anything about the obkective life and death status of groups.

I’m surprised that japanese rules are the most popular in western countries when it is not even clear that they are well defined.

In my experience it’s rarely a problem in real life for non-novice players.

Novices tend to play unneccessary moves all the time and they are usually happy to capture dead stones during play, even if it loses points.
But for games between novices it’s better to have a coach around to help with finishing and scoring the game. I think using area scoring doesn’t really fix all of the issues that might occur in finishing and scoring novice games. Playing unneccessary moves to capture stones under area scoring while the opponents takes neutral points still effectively loses points. And not closing borders is a problem under any rule set. Also, leaving groups with objectively undetermined status is a problem under any rule set.

As soon as players have a decent understanding of the game and are aware of life and death and the concept of unneccessary moves, such group status disputes don’t really happen IME. Players would tend to agree.

If it is a friendly casual game, they can probably resolve group status issues with the help of their opponent or someone observing the game.

If it is a tournament game, they can call a referee in case of a group status dispute. But IME this rarely ever happens (outside of beginner tournaments).

So IRL it’s not really a problem that needs fixing, as far as I’m aware of. Finishing and scoring a game without any outside help is difficult for novices, whatever the rule set.

Finishing and scoring a game without any outside help is difficult for novices, whatever the rule set.

I’d like to note that go is not unique here. I remember a video by a chess teacher who once was a referee in a real life childrens tournament where he arrived on a game in progress where neither player had a king on the board. He asked what happened to their kings. They replied, “Oh, we exchanged those long ago”.

This is another example of the scoring tool reversing the outcome of the actual game.

When both players passed they were very obviously agreed that it was blacks territory.

Then the scoring tool, which is smarter than the players ruined the game by telling white, umm hey you can win- after white has said ‘I’m done’.

So in this game, by the rule, can I say left side is black territory, even though white could’ve captured some of black stones, had it not agreed to end the game?

Here is the original thread:

If we’re going to talk about the true score, how should OP’s game actually have been scored? Reading the Japanese rules pedantically, it seems like most of the left side of the board (all regions connected to the dead group) should count as seki, meaning White should have lost most of their territory. Is that really how it works? If so, discovering a dead black group could sometimes result in a gain of points for Black! 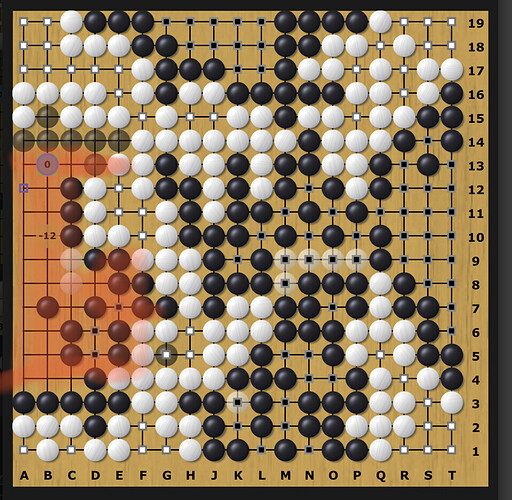