Why do good players play this small looking move in the corner?

The next move for white here (marked ‘1’) is something I see a lot of in pro and bot games.

Could someone explain why it is the right time to do that?

With the whole board out there, I can’t see what it is that’s making this the right move at this time. 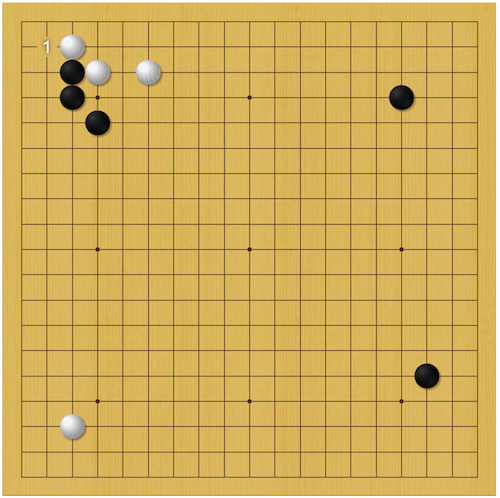 From my (rather limited) point of view
regarding small-looking read about honte https://senseis.xmp.net/?Honte

Before 1 white is weak.
Should he/she tenuki the group might get in trouble. The peep at E18 for example can be rather dangerous (esp if black managed to get some supporting stones in), but even without the peep B18 would probably be forcing (and sente) and getting pincered after seems very uncomfortable. White won’t die, but the result won’t be much to celebrate. Urgent before big, and especially since it seems that white can end with sente, there is no reason to let the group be harrased.

Therefore white decides urgent first and wants to solidify the group. Now the question is, can I do it in sente? And after B18 white is comfortably alive, and now it is black who better respond, otherwise he/she will get uncomfortably harrased by a “pincer”.

Because without it that group is ripe to be attacked powerfully. Being attacked is bad since it gives opponent power to control direction of the game. Group that is running is not making any points. In some go book is advice to think of weak group as having negatory point value. So essentially without that move you could imagine those stones being worth -20 points or like.

EDIT: So for clarity when I opened that link I saw C11 as move marked “1”. Just now I realised everyone is talking about B18. So please have that in mind reading my earlier comment.

Actually 1 for white is an aggressive move, urging black to make a base in the example position, but it’s more common that white makes move 1 if there’s already a white stone on the left side reducing black’s ‘basespace’.

Black playing 1 isn’t usually much of an issue unless b already has a presence on top, in that case w might want to play either 1 or tiger’s mouth depending on the aji.

It’s a solid move, all around. It more or less makes the white group alive, it gives white some endgame aji to reduce black on the side, and it’s sente. If white were to tenuki, and black played there in the future, black would similarly live in sente.

In terms of the size of the move, white might not be directly surrounding much in terms of territory, but consider what happens if black plays tenuki instead of responding. White can pincer the whole black group, which doesn’t have any eyes, and will surely profit substantially by chasing it across the board. Black’s response is urgent, so white can stabilize the corner and still be reasonably sure he’ll be able to play any other big move on the board, afterwards.

So for clarity when I opened that link I saw C11 as move marked “1”. Just now I realised everyone is talking about B18. So please have that in mind reading my earlier comment.

I should’ve just posted a screenshot. I did that now

I should’ve just posted a screenshot. I did that now

Move 1 gives W absolute life, corner territory (even if just a few points), and denies B a base. I assume B follows with an extension on the left, or else W would attack this group severely.