Why is it that handicap games are so scarce on OGS? 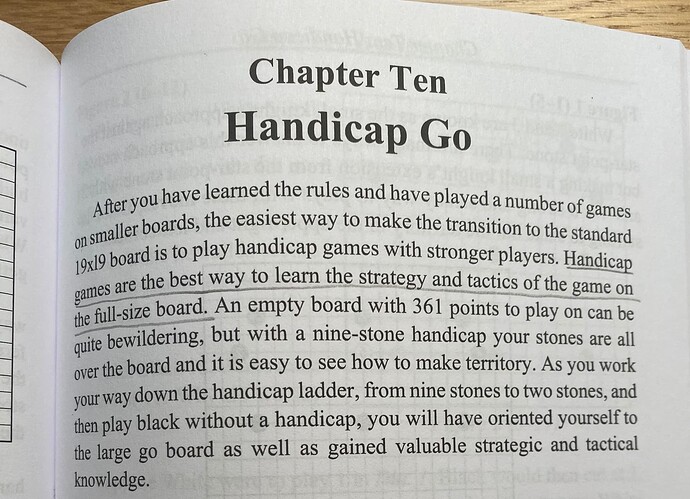 This is from Go: A Complete Introduction by Cho Chikun.

I might be wrong, but I imagine that the automatch system doesn’t really take handicap into consideration - am I missing something?

You forgot to underline the caveat to that sentence: “After you’ve learned the rules and …”

This means that we are talking about very early in the learning process.
So, in this case you could probably locate an SDK (there are various threads about this or you can make a new one where you specify what you seek) and give a DDK that is learning teaching games with handicap, but it is rare that you will find people willing to get into handicap games based on OGS rank, because that rank is fickle and it does not really reflect “stone-strength” so to speak.

For example, do you think that a 16k player is confident that they can play you at 23k with SEVEN handicap stones on the board? Or a 14k player would really place NINE handicap and still think “yeah, I’ve got this”.

I should hope that a 14k player would think “yeah I’ve got this” against a 23k player.

(And note that you only have to “got this” half the time, at even handicap

Thanks for the advice. I’ll see how I can request such a teaching handicap game.

Hey, who you calling “remarkably weak”

Automatch does have handicap as an option (in settings), but I think you’ll have better luck creating a “custom game” with automatic handicap. Since they get advertised in the list below, someone usually takes mine within a few minutes even when the settings are weird.

For example, do you think that a 16k player is confident that they can play you at 23k with SEVEN handicap stones on the board? Or a 14k player would really place NINE handicap and still think “yeah, I’ve got this”.

then what do their relative ranks even mean

In a club, those ranks may be correct, but I honestly do not know what ranks in OGS really correspond to. (personallly I trust DGS ranks, much more than OGS ranks)

Be that as it may, my suggestion is that since most people want to play an even game most of the time then if someone wants to find high handicap games, instead of expecting something like that from the “automatch”, they’d probably find such games faster by asking for teaching games from even stronger players.

Correct me if I’m wrong but the claim is that the handicap game results on OGS approximate a 50% winrate for either side, better than EGF ranks do. (2020 Rating and rank tweaks and analysis).

I personally find this very hard to make sense of, seeing how a player on OGS can be 1kyu one week and 6kyu the next week. This could mean up to 10 stones swing in a handi game between the same players.

1kyu one week and 6kyu the next week

genuine question - who other than Sofia has a rank that regularly swings that much in spite of having enough ranked games to imply reasonable confidence in the rank? I don’t think I’ve seen that with anybody but her, but I pretty much only play Ladder games so my data pool is pretty shallow

the claim is that the handicap game results on OGS approximate a 50% winrate for either side, better than EGF ranks do.

I’m wondering, whether it would be better to look at the standard deviation than at the expected winrate. If handicap stones would be assigned at random, that would also lead to a 50 % winrate overall, right?

Maybe the fact, that black has a 50 % winrate in even games, but a 40 % winrate in handicap games, shows that OGS knows something about the strength of the players. (Nonetheless in my opinion OGS should aim for a 50 % winrate, otherwise that just means weaker players aren’t fully compensated for their weakness.)

You got me there; I was referring to her rank as an extreme example of how the handicap system wouldn’t work. It didn’t take me a minute to find a different case of 6 stones swing in a month after you asked though (and another case of 3 stones swing in 5 days). Even just 3 stone swing per side could mean 6 stones difference in handicap.

I suspect anyone who plays lots of games while mixing board sizes and time settings will have these fluctuations in their rank. I expect that someone who plays all types of games the server offers and does it often, should have a settled and correct rank. Somehow it seems to be the opposite on OGS, i.e. the more you play, the less trustworthy your rank is.

Because OGS had decided to make handicap off by default, a server design decision I have long pointed out the shortcomings of and campaigned for changing. E.g Better stats with one color - #46 by Uberdude

I don’t really understand how rank fluctuations have an impact on how well handicap games work. After all even games are just a special case with handicap = 0. So when I play with auto-handicap and the handicap is off by 6 stones it’s bad, but if I play an even game against someone with supposedly the same rank but in fact being 6 stones better or worse than me, that’s fine?

I don’t know why handicap is disliked by so many, I have played many interesting handicap games on OGS already. And occasionally not so interesting ones, because the handicap was not right. Just like I or my opponent of the same rank sometimes get an easy win because the ranks are off.

I wasn’t comparing handicap game results to even game results - wasn’t saying one doesn’t work and the other does. When you can give someone 3 stones one week and take 3 stones from the same person next week, that should cause some damage to the integrity of the results of the handicap games, regardless of the results of even games, which makes me question how OGS approximates 50% winrate for strong/weak sides in handi games with such a deficit in place.

My reply wasn’t aimed at you specifically. If at anyone, it would be Jeth I guess.

I believe there are two answers to this question. First, which the discussion is talking around rather than being explicit, is that there is an enormous amount of sandbagging on OGS, as on other servers. Most of this is alt sandbagging, as I have discussed many times. No one wants to give a handicap to someone who might be a sandbagger to begin with, since it is usually impossible to identify a sandbagger in advance (unless you are a mod). That is a huge distinction between online play and an IRL club setting. The two are not at all comparable.

Second, handicap games completely distort the opening and require special knowledge or experience from the stronger player (some books have whole chapters about the topic), which many players, if not most, don’t have. Although the distortion of the opening is not a bad as in chess, it nevertheless makes me doubt the learning value of random, online, handicap games (as distinct from structured courses in a dojo or online with a single teacher).

In view of these two reasons, I don’t find it at all surprising that players are reluctant to play handicap games, especially ranked handicap games.

I like playing with all the ranks hidden, its just more fun to play when you have no prejudice about who “should win”

Handicaps in a way ruin that :<

Altought for teaching games i really recommend handicaps, especially for newer players who are not yet familiar with josekis or opening theory.

Throwing my own lot in, I just feel like handicap (aside from komi-adjustments) is a very different game.

It has the same rules and structure, but the enforced board structure and influence that comes from having extra stones on the board make it feel like I’m practicing something different

I’ve only recently turned handicap back on because I am looking to get games where my opponent has more influence than me to practice reductions, invasions, and sabaki

As a new player and a new OGS user, I can’t say this thread has been super helpful. I had no idea it was such a sensitive topic.