Starting yesterday (2016-05-16) some time, the OGS main site has started rendering slightly wider than my phone screen (Moto XT1045). While this is not a problem in and of itself, it causes the playing board to have to scroll to reach the last few columns. This isn’t a fatal problem in and of itself, but after scrolling the stone placement algorithm doesn’t seem to take the scrolling into account. Touching an intersection in, e.g., column T will cause the stone to appear in column R. This makes it impossible to place a stone in the last two columns.

We haven’t seen this before… can you post a screen shot? 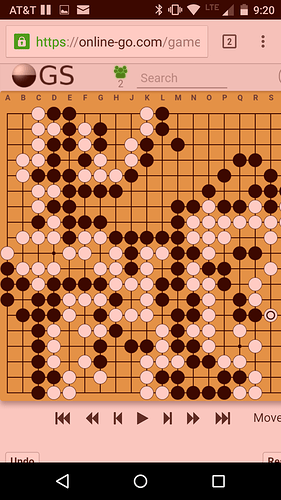 So I think the problem was zoom level. I wasn’t able to zoom out when I first tried, but I was able to do so this morning. Fat fingers? I think you can consider this issue user error.