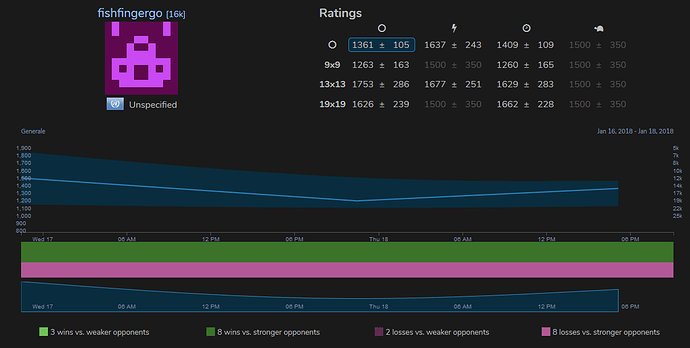 I noticed it since august 2017 after the changing of rating system.

I looked at your ranking diagram and noticed that some losses are not visible in the bars of the histogram in the lower side: no purple at all since july 2016 until may 2017! Maybe there’s a bug in the histogram itself… or maybe the bug affects also the ranking calculation… (even though losing some losses should reasonably cause a higher rank instead of a lower one).

Another example. Here I selected one month. 1+7 losses not showing in the histogram. 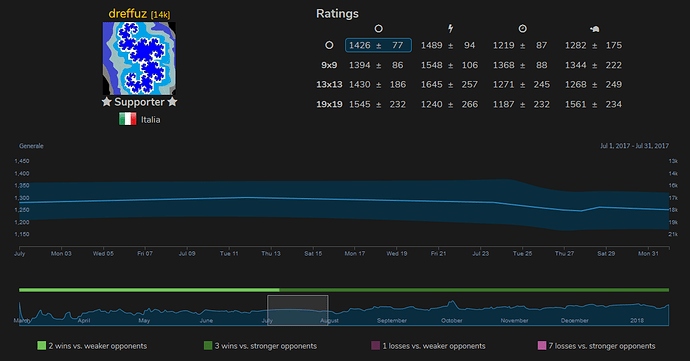 You are correct - I’m glad you reported this.

I had previously submitted a bug report about this, but didn’t have a lot of good evidence.

(In fact, I’d only seen it on the test server, so it wasn’t completely certain that it was even a real problem).

So your real-life example is good to prove that it is.

In case you are interested, the bug report is here: https://github.com/online-go/online-go.com/issues/466

I think I’ve track this down. Or at least, I have some explanation of some things I didn’t know before.

At the beginning and end of any graph, there are bars that are “chopped off” - if you imagine the graph going in to the past, before you started, your bars would extend back there.

This matters, because the weak-losses bar is on the left of the month. So it will likely be missing from the first month on your graph, on the left. The same sort of thing on the right.

Yes, in general seems that the purple bar is too thin.

Also, when there are too few data to display, the vertical axis flips!

Yes, I’ve submitted a fix for that.

I’ve also suggested (and submitted) that the truncated months are simply removed, and it only shows complete months, for reduced confusion about what we’re seeing.

Also, when there are too few data to display, the vertical axis flips!

I missed that part. What do you mean by this: I can’t spot the effect you’re talking about?

Oh, up there yeah that’s very wierd! I should be able to find that one!