I just found out that a game I won has been annulled. The opponent reported that the server counted wrongly. however his counting is wrong, and then my game was annulled. See the screenshots, please. I dont know why I dont see my next move after last black’s move. But up to that point I was way ahead. 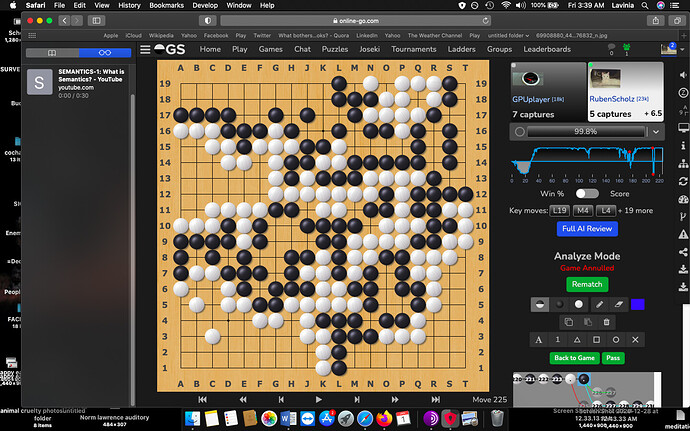 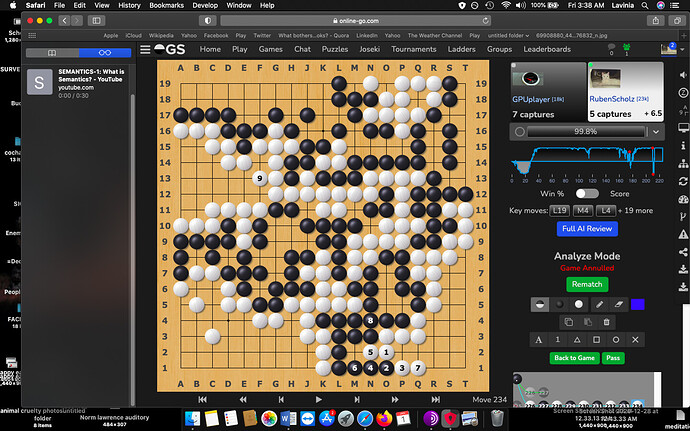 Your screenshots are in analyse tool both. Maybe giving the link of the game (copy/paste from the address bar up) will ease the job too.

I don’t know why both players passed yet nor why both accepted the score in the scoring phase but the top right white group is dead giving black about 40 more points. So I don’t think whatever happens in the lower right matters so much.

This is the game we are talking about. 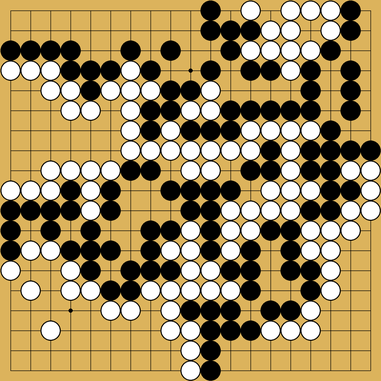 The White top right group was not counted as dead by the program. No wonder that the opponent had this one annulled.

More important than the final count is to understand that neither player should have passed. It’s impossible to count the entire bottom right corner of nearly 30 points, because that area is surrounded by neither of the players.

Yeah, the dead white group hasn’t been marked as dead, and the bottom corner isn’t settled yet, both reasons to annul the game. Finally, the AI is convinced Black was ahead (which it should be if the bottom is settled evenly).

I didn’t annul this game, but I would have done the same, if I had gotten the report instead.

I confess I missed the death of that group, but I just didn’t check anything at all before seeing the real game (not some analysis).

@RubenScholz The white group is dead up because white miss a stone at N18. Without that stone, the eye here is fake, sooner or later he will have to fill it because the N19 stone will be on a threat to be captured (Atari!)

The scoring system was wrong to consider it alive.
So the difference is 12 prisoners= 24 points and the empty inner spaces and a bit more around so almost 30 points,. That change the result to a large win by black 30-12.5 (the wrong calculated)

Im more than well aware that that group is dead. But I took my time to count the points. Also, I would like to know what happened after his last move.

I was ahead. I have taken my time to count to points carefully. Even with those dead white stones. I posted the second screenshot to show that the bottom right corner was in my side. I do see why I would have quit. His string at the right hand corner would have had to move back and left with only 1 eye. It beats me. It is unusual for me to pass. I normal use my lasts resorts, b/c I am learning and I want to see if there is anything that I can do. Also, I have mention that another of my games was also annulled when I won.

Ok so, I make it black 97 and white 86.5 going by the second screenshot.
I might be a bit out but it’s a big enough margin I think 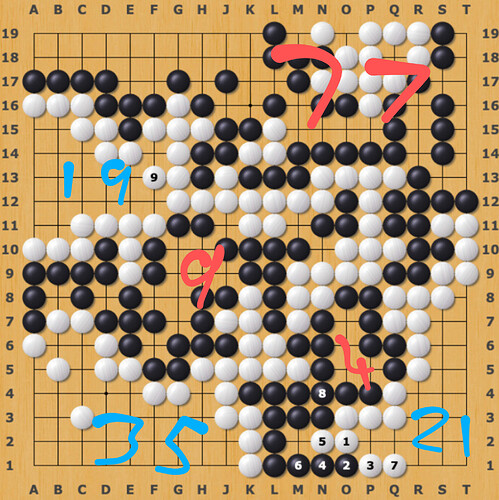 The mystery is how both players passed and accepted the score…

My opponent had 71 points and I had 81 points. This is before I even move. It was my turn. Pls see screenshot #2 I have counted very carefully. I was ahead not doubt. And that even with my death stones.

Hence Black is ahead by about 7 points here. 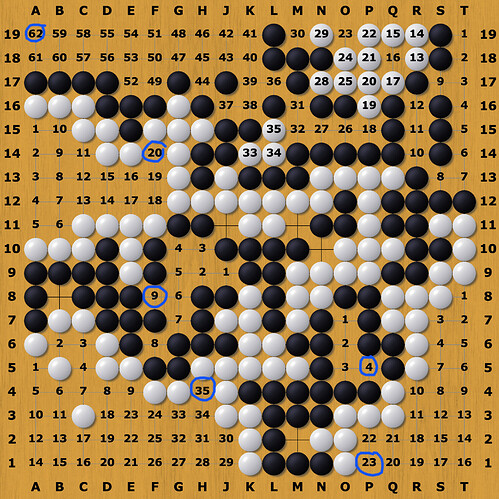 Also, I have mention that another of my games was also annulled when I won.

Feel free to post it, and we can have a look.

I have done my counting Very carefully several times. Here it is: Black top including 2 points for my death stones is 69 not 77. I counted two points for each dead stones, b/c it is my understanding that it s counted a 2, correct?

Black top including 2 points for my death stones is 69 not 77.

I do see why I would have quit. His string at the right hand corner would have had to move back and left with only 1 eye.

I’m convinced because of this comment, and because you played F13 in your own calculation, that you think a group should have two eyes to live. It is slightly more complex though: a group needs to be uncapturable to live. Two eyes is one way to make sure a group cannot be captured, but there are other ways, such as the potential to create two eyes: 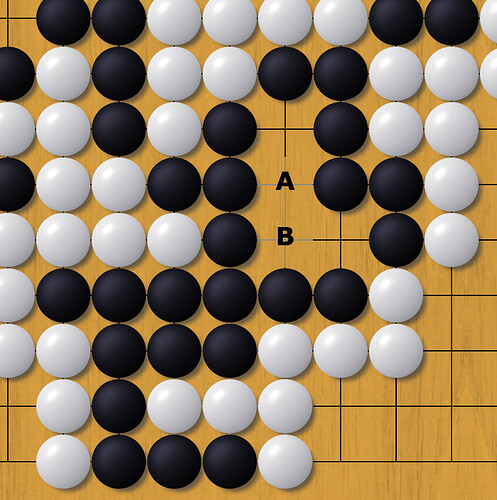 Although the Black group has a “single eye” in the sense that the surrounded territory is connected, Black has the potential to make two eyes and cannot be blocked by White: if White plays A, Black creates two eyes with B, and vice versa. Therefore Black is already alive and does not need to play any move here.

Another way a group can be alive is if it lives in seki, see for example here: 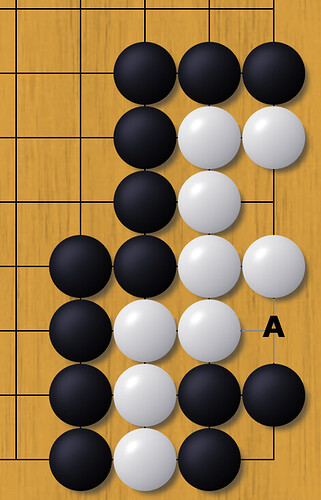 Both White and Black’s inside group only have one eye, but neither can capture the other, since a move at A is a self-atari. Therefore both groups are uncapturable and thus alive.

Yes, he won. Thank you for looking into it. Is there a way for me to find out the points in the game while the game is going on?

Is there a way for me to find out the points in the game while the game is going on?

There is a score estimator, as long as you don’t have analysis disabled, but it’s notoriously inaccurate. Many people consider accurate counting to be a valuable Go skill, and it can be pretty hard to count an unfinished game accurately, so don’t fret it if you sometimes miscalculate. Many people also agree that counting is valuable at the higher level, but at lower levels you’re better off studying capturing problems and general strategy. It’s definitely possible to get to SDK level without knowing how to count, while I doubt it’s possible to reach without knowing how to solve basic tsumego or knowledge about direction-of-play.

It is unusual for me to pass.

So why did you?

As I mentioned before: Understanding that you shouldn’t have passed here, because the game wasn’t over is far more important than miscounting by a few points.

At your today’s level of it’s a big ambition to try to calculate territories during the game but it’s absolutely valuable.
If you want to try:

Count only the sure points, not what is in doubt. You can think that the remaining will be shared 50/50

Good luck and have fun

Thank you. What is “tsumego”?