Yeonwoo and the Popular 3-4 Joseki

In Yeonwoo’s 3-4 Joseki Lecture, she mentions that most professionals now end the popular 3-4 joseki early and consider the popular stabilizing moves slow. This thread is for discussing how that observation might impact the position in our dictionary. Here’s relevant chat from earlier:

[14:16]Kaworu Nagisa: she also recommends playing out the joseki fully until ~7k, because then you know it and can handle stones better. im not sure i would recommend it as slow to a 15k. id still prefer ddks to play defensively and take care of their groups first and foremost

[14:19]Kaworu Nagisa: im worried that all the AI stuff and the “this is slow” is going to hurt beginners more than help

[14:19]Kaworu Nagisa: maybe the joseki dictionary should have some sort of tagging or separation for beginners and non?

[14:20]mark5000: That was my thought too. I’d propose to keep it as it is, with the joseki ending where it does. Perhaps I could also temper Yeonwoo’s language to “a bit slow.”

[14:23]Eugene: It has not cyrstalised yet for me how much consideration should be given, in our Joseki Explorer, to “beginner specific factors”.

[14:23]Eugene: The effect of something on beginners is important, but perhaps not an overriding concern if it would mean the dictionary is less useful overall

[14:24]Eugene: I wonder how tagging for beginners and non-beginners would help in the current debate?

[14:24]Eugene: Does it help to say "let’s suppose that beginners always have “basic” and “Joseki: Done” filtered on.

[14:24]Eugene: This means that they don’t see sequences that don’t end in these tags

[14:26]mark5000: That’s the issue. Yeonwoo is saying (rightly) that the joseki ends in a different place depending on your rank. 7k and below end at the traditional spot. 6k and up should tenuki early.

[14:27]mark5000: Or maybe she is saying that the joseki ends early, but weaker players can add the traditional stabilizing move.

[14:31]Kaworu Nagisa: the issue is that weak players dont know how to handle weak groups, or groups without a base at least

[14:32]Kaworu Nagisa: if a beginner doesnt play the stabilizing move because ogs says “its slow”, and then the beginner gets pincered because their opponent followed “your opponents key move is your key move”, they’ll like end up in a worse spot

[14:32]Eugene: I think it’s helpful to capture that information from Yeonwoo

[14:33]Kaworu Nagisa: but i dont think the dictionary is set up for beginners or advanced players

[14:33]Eugene: One useful consideration is that beginners are strongly advised not to worry too much about joseki

[14:34]Eugene: If the position says “the source says that SDKs should tenuki here” and a beginner tenukis, that’s really the beginner’s problem

[14:34]Eugene: The advice I received when starting was that there are 4 I should know

[14:34]Kaworu Nagisa: but i would have just tenukid, becasue “its what strong players do”

[14:35]Eugene: Then more fool you I say, you need to learn that the best move for a player depends on the player’s sklil

[14:35]Kaworu Nagisa: and if i play the strong players move and not the weaker one, id have thouight i was already ahdead regardless of whether or not i knew how to handle a weak group

[14:35]Eugene: And you will learn that lesson painfully by copying advanced moves you don’t understand and dieing painfully

[14:35]Kaworu Nagisa: unless the goal is to win, and the dictionary says “this is the better move”

[14:35]Eugene: If the dictionary says “this is the better move” unconditionally, I would agree

[14:36]Kaworu Nagisa: actually thats how i learned go, by studying stuff i didnt know and then trying it out

[14:36]Kaworu Nagisa: thats what was reccomended to me by basically everyone

[14:36]Eugene: If it says “The source advises DDKs to continue here” and a DDK does not, then its OK that they die painfully learning about that tenuki

[14:36]Eugene: Note that I’m not saying that DDKs should not try new stuff

[14:37]Eugene: I’m only saying that they do so knowing what they are doing: trying new stuff that they don’t understand

[14:37]Eugene: And someone explains to them the ins and outs of those two sequences

[14:37]Kaworu Nagisa: so why cant the ogs joseki dictionary do that?

[14:38]Kaworu Nagisa: why cant it be more than josekipedia and eidogo?

[14:38]mark5000: If we changed the dictionary, we might mark the earlier position as “Joseki:Done,” mark the traditional moves “Position Settled,” keep those moves as IDEAL, and mention in the description that they are often good stabilizing moves even though the joseki is done.

[14:38]Eugene: That is a good question: is the case in point a debate about “how much explanation of options to put in”?

[14:39]Eugene: Ah - there’s an important basic challenge here that as far as I know is not closed yet: can there be more than one Joseki:Done in a sequence

[14:39]Kaworu Nagisa: yes, was just typing out that too eugene

[14:39]Eugene: aesalon and I were discussing the pros and cons of this based on the effect that it has on the filtering tool

[14:39]Kaworu Nagisa: i think ogs copying the structure and formatting of eidogo and josekipedia is limiting it

[14:40]Eugene: I had envisaged that you would do this (have more than one)

[14:40]Eugene: Then we started talking about it, and I am currently uncertain about the pros and cons, and whether it needs more support in code/features to make it sensible

[14:41]Eugene: I like the challenge-question of “Can OJE be more than these things?”

[14:41]Eugene: And have set out to achieve that in some way. But of course have to be careful about not trying to be everything for everyone

she mentions that most professionals now end the popular 3-4 joseki early and consider the popular stabilizing moves slow.

A or B make good shape but can be slow sometimes.

This is a hasty judgement. Yeonwoo is a wonderful source but she isn’t the only one. (at some point we will need to address how to handle source priority)

For now, my point is that in games from August of 2018 until November 2019 professional players (are also a primary source for a Joseki dictionary) treat it as very urgent to finish the joseki.

Your point that Yeonwoo isn’t the only source is well taken. At the same time, your graphic does not exactly contradict what she is saying. It shows local continuations for the 11x12(?) search area. It does not tell you whether AB are played immediately after the marked black move. If anything, it supports Yeonwoo’s point, because even with these limitations pros did not play AB in about 110 of 407 cases (86 tenukis and some black moves at AB). All it shows is that White did end up playing AB, either immediately or after some delay, nearly 300 times.

I added one final image. White continues on that side of the board in 70% of the times it was played in November 2019 so far.

It does not tell you whether AB are played immediately after the marked black move.

I mean, if you play moves outside the search area, the output remains the same. It’s the same as searching in waltheri’s tool in this respect.

I mean, if you play moves outside the search area, the output remains the same. It’s the same as searching in waltheri’s tool in this respect.

I’m sure you have a misunderstanding about Kombilo. I’ve clicked through about 100 of them by now, all after the previous move.

It is never the same as waltheri’s tool. You are absolutely mistaken here. 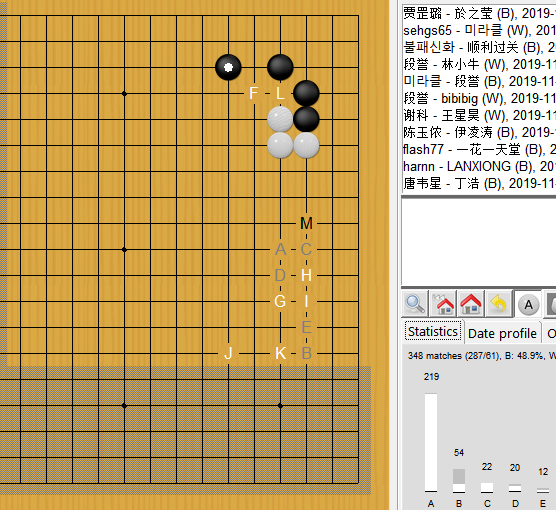 4uM3ro2.png556×510 60.4 KB
In the 219(A) bar, you can barely see the sliver of Grey. Those are the positions in which White plays ‘A’ after a move outside of the search field. The white in the bar is when white responds immediately with the move. I can give you these 348 games to click through if you would like to find more than ten(five?) cases where A is played after a tenuki.

This grey is more noticeable in the ‘B’ variation. 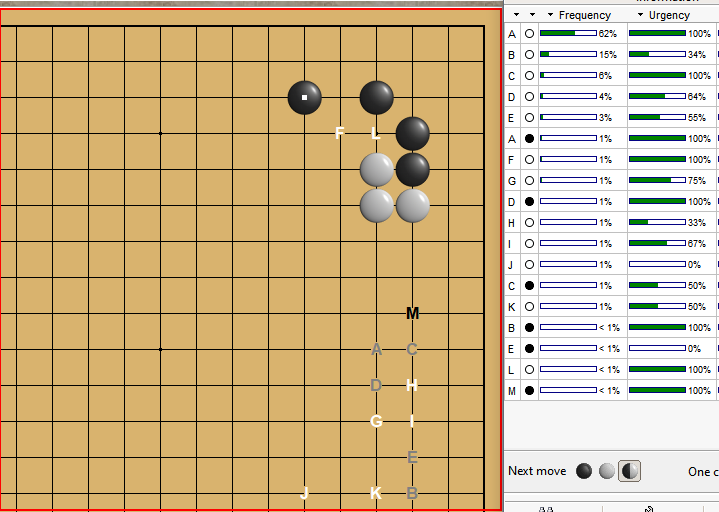 Thanks. That’s the kind of information I’m looking for.

Is there any update on how professional thought on this has evolved over the past nine months?

Personally, not finishing the joseki as Black in a regular opening position wouldn’t really occur to me. I really like to complete that shape.

I was surprised by Kaworu’s quoted post (which in turn quotes Yeonwoo) saying that players should be thinking about tenuki’ing early in the joseki from 7k up. I regularly see 7ks play s*** like R12 here https://online-go.com/joseki/65, they have no idea what they’re doing! (bugcat says, having been demoted to 8k)

This sounds like a joseki in the context of a fuseki problem. I’m sure top A.I. would still complete the joseki in some situations and tenuki in others (it might even just depend on the iteration of the ai, weights etc - ai probably have fads too).

I don’t think it should impact the dictionary really unless we want to say in x situation you might tenuki here, and of course since you tenuki’d here’s the important follow ups for your opponent.

Is there any update on how professional thought on this has evolved over the past nine months?

In the past 9 months, it has become even less common to tenuki from the three stones. (It was played ~1% of the time.) It is because the fuseki positions described at https://online-go.com/joseki/413 aren’t in fashion and those were the only times that pros considered it.

Sorry, I had a brainfart and searched for the move before the connect somehow. This is the correct search: 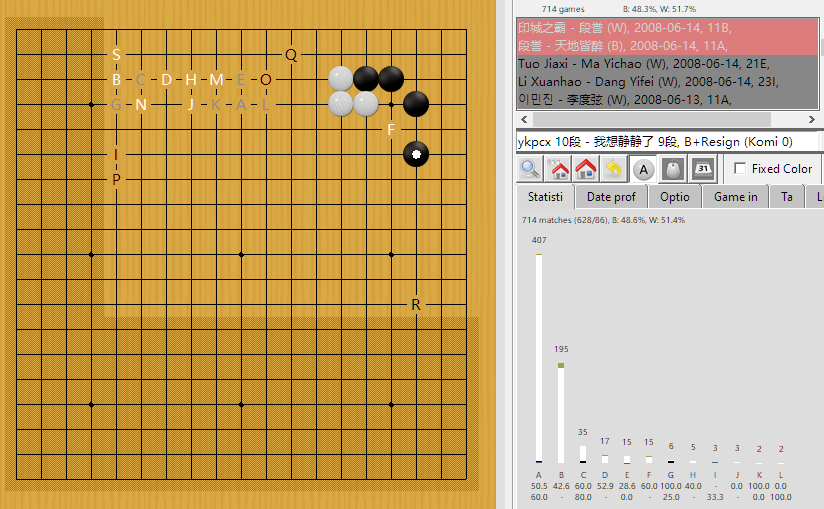 B is played vs the small or large knight shimaris in the upper left. C vs a 4-4 stone. C or D as enclosures from a White stone. Though the searches aren’t exactly the same, it looks like it is a little more common to play in the upper left before finishing the joseki than it was 9 months ago.

It’s be cool if, say you wanted to point out something in a joseki, maybe other corner side stones etc, if the markdown had the option to place other stones on the board like it places x’s and letters, maybe have them slightly more transparent like the ai analysis stones. Then if you played another consecutive move on the board they disappear like all the other markdown stuff.

There is some old discussion on this subject, almost entirely from 2007, on Sensei’s Library in the BQM 349.

At this point it may well be of largely historical value, but still…

I note that even then, Bill Spight said that the tenuki had “become much more popular in recent years”.

That is a different tenuki than the one mentioned by Yeonwoo. Bill is talking about tenuking from the corner rather than the three outside stones.

In that case, I’ve misunderstood this thread from the offset.