Maybe it is a little to early to be so enthusiastic, but I must say i simple LOVE the new zen mode!

This is exactly what I needed (and didn’t know of it :P) for playing on mobile. Incredibly fast, no distractions, you must make a move in current game to proceed to the next one - very good motivation to not leave “hard moves” for later and just skip through them every time.

For me it would be perfect if it also had the clocks and captures below the board. Right now there is no good display mode for playing on tablet pcs in portrait mode, you end up with a landscape UI and 2/3 of your screen empty.

edit: or even better, show your time remaining in place of “your turn to play” only on your turn.

where do i find this zen mode?

It’s on the right sidebar of the game page, it’s the “Z” inside the circle.

@HowToPlay beat me to it 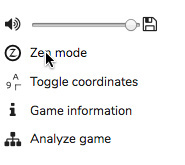 Thank you @trohde and @HowToPlay! What is the point of it anyway? Blocking out the chat is pointless since chats arent viewable till after the game and not seeing the timer can actually lead to losing on time. Any other features that are not as apparent that I might have missed?

s pointless since chats arent viewable till after the game and not seeing the timer can actually be lead to losing on time. Any other features that are not as apparent that I might have missed?

Think of it as a full screen mode, it removes a lot of the clutter. Although yes showing the time is important.

chats arent viewable till after the game

(I for one couldn’t live without seeing the chat, though, in case my opponent would want to communicate.)

I agree about time, and IMO the captured stones should also be shown, maybe just make it small growing stacks of stones or something? Little columns ten stones high?

Obviously I’m referring to chats from outside interference, unless your opponent is chatty enough to actually have to use zen mode to ignore him, which is pretty rare imo.

Still not sure which need this new mode caters to. Seems to cater to a very small want and not really a need. If it does speed up the moves or something on a portable device like the first poster said then I can see some use in this, but as I use a PC mainly to play, I don’t find any noticeable difference.

I myself am quite the opposite, sort of an information junkie, I’d even like it if there were a little FPS pane (OK, that was kidding), or a pane that shows how much OGS server power and space the current game uses, or a small console that shows the commands that shoot through the wires when I place a stone

I like the idea of zen mode but it really needs at minimum a way to show the number of captures. Not having distractions is good and all but there is currently no way to know who is winning in a close game without leaving zen mode.

One tiny quibble from me is that there appears to be no margin at the top, and so the board is uncomfortably right up against the top of the screen. It would be lovely to have a small amount of blank space there.

Well, I use it to watch games, for which it is quite lovely. Wouldn’t play that way, though.

I think Zen mode is great. I took a liking to it as soon as I saw it.

Still, I think it could use some improvement. For that reason I made a suggestion on uservoice.

Unfortunately Zen mode cannot reach its full potential until at least the clocks are displayed. Currently I have to leave zen mode to check how much time I have remaining. Of course, that means that I just stay outside of zen mode.

Without seeing clocks, I don’t understand how I’m supposed to actually make use of this feature.