Though I won this game, there were parts I could have played better, and I’m looking for a review of those parts in particular (though comments on the rest of the game would be more than welcome).

These are the parts: 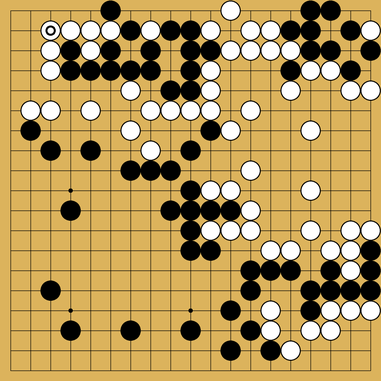 Top left & top right were definitely flubs by B, I left analyses of both in review (as well as some opening and early midgame comments) I hope I wasn’t too harsh.

I think the upper left had issues mainly because you didn’t value connection. You let White connect to safety when the invasion deserved to die, and you left your own shape open to cutting.

The upper right went your way due to White’s big mistake. Without the mistake, you still might have lived if you knew the proper sequence for invading a large knight enclosure. Everyone should learn this sequence because it’s so common.

@mark5000 thanks for the review! I liked your suggestions for late opening moves and the reference to josekipedia is really valuable. (I spent a lot of time browsing there!)

@mekriff thanks for the review! I appreciate how thorough you were on the upper left. Your variations branching off from move 24 got a little confusing but it led me to some interesting explorations on my own and an understanding of how it would be possible to kill the white invasion. Your guidance on joseki in the upper right was helpful too! At moves 47, 48, 78, 80, you mention that white could attack black’s moyo and black should defend. What are some examples of good moyo invading moves and ways that black could prevent them?

Yeah, moves 24 was me spotting a strange weakness I almost never look for in my games, so I was glad I found it.

And about defending the moyo, it’s quite simple, just get in the way of white’s reduction. Build a wall to keep the enemy out. I have provided a variation demonstrating this (and the subsequent counterreduction that you can still do after having defended).