Can’t understand what went wrong for me in this game. It looked close and not at all like I was behind 20 points. Maybe somebody would have some comments. 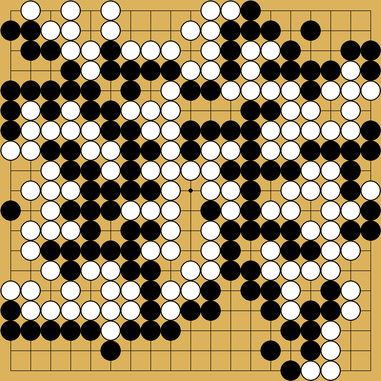 Looking at the AI review graph, you basically had a small lead until the endgame started around move 127.
By a rough count after move 126, I get a bit over 60 points for white (including komi) and about 25 points for black in the upper right and lower left, plus a hard to estimate potential in the lower side/lower right corner.
So black needed to cash some 35+ points in that area to win. That may be possible if black plays move 127 at S5 (or perhaps S6). After white took the lower right corner from black, black is suddenly losing. Did you consider playing move 127 at S5? If yes, why did you reject it?

Did you consider playing move 127 at S5? If yes, why did you reject it?

Yes I did. I rejected it because I felt that white could kill my group, so I played a “big endgame” from my group first. For example a sequence that I assumed during the game (maybe 16 right of 14 first and then 16, something along these lines) 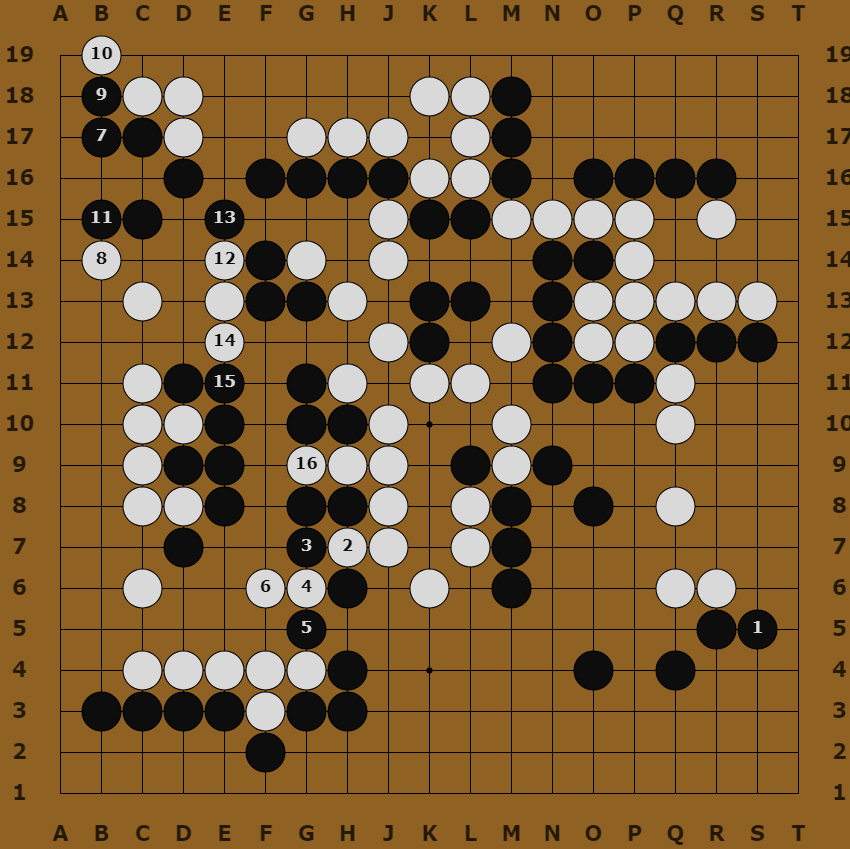 Though now I see that black can live at e17. But still this was the reason why I defended my group. I couldn’t see the exact way to live.

That makes sense, but if black really needs to defend that group instead of taking the largest endgame point, we should adjust our assessment of who “won” the fight in the center that black started with the hane of move 59.
The AI points out some moves by black in that fight that may be slow, such as move 81, 107, 111, 119.

I see. But still it’s hard for me to tell where it all went -20 points. Bottom right was open, sure, this is sort of the point of the kick joseki, so I’m not sure this should that much of an effect given I had influence towards the left. It’s just hard for me to believe that sente was worth 20 points at the time white invaded bottom right, because essentially it’s how it turned out.

Sente wasn’t worth a full 20 points. In itself, move 127 only lost about 5 points. But then move 133 lost another ~5 points. I suppose that taking the corner with S3 was still bigger than defending some 15 points on the lower side in gote. I suppose the reason is that move 133 gives white R2 and Q1 endgame in sente (~13 points).

Also, maybe black should have intercepted on move 129 (at S4 or S5) going for mutual reduction of territory, instead of black reduction and white expansion.

For me a picure emerges of black playing the large endgame a bit too passively, accumulating minor point losses to a total of ~20 points.

I see. Looking at it right after the game where I decided to block from my side for some reason it looked way better, but indeed I should’ve just forced white to live or escape in gote in favour of getting yose on the right. I blocked from my corner because this looked too sketchy for me 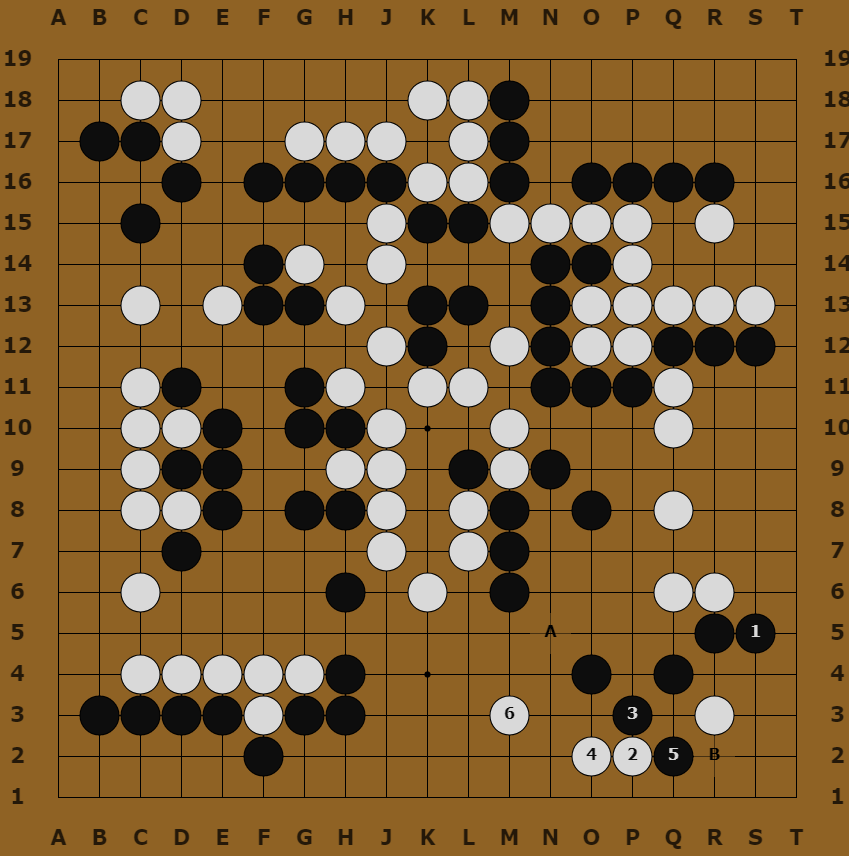 Because there’s annoying aji at A and corner is effectively zero points because of B. But maybe if had put more merit into L6 being a “killing move” then I would’ve gone for this.

I have some doubts about some moves in your sequences.

5-6 looks like a bad exchange for black and black 7 feels a bit slow. Black E12 goes a long way to make eye space for black, also considering that black G12 is almost sente for black.

I have some doubts about white 2. If black then intercepts at Q2, white can capture that stone, but is it good for white? 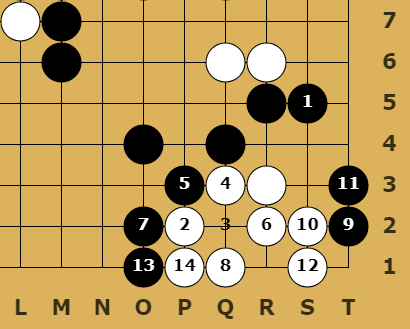 I would maybe expect white to play 2 at P3 or O2. Not sure though, I didn’t check with AI.

I have some doubts about some moves in your sequences.

Yes the first sequence was just a sketch of what I thought about during the game, like you know your “most obvious” reading before you try adjusting it in case it doesn’t work.

I have some doubts about white 2.

It’s a standard move, right? Especially if white wants to lean more towards the outside sequence.

If black then intercepts at Q2,

White can extend instead of 6 reverting it to as if white had played q3 prematurely in my diagram. Though looking at the spot I marked as A in my diagram above maybe white would indeed try playing it anyway in order to try and get the peep in, resulting in using this aji I mentioned. 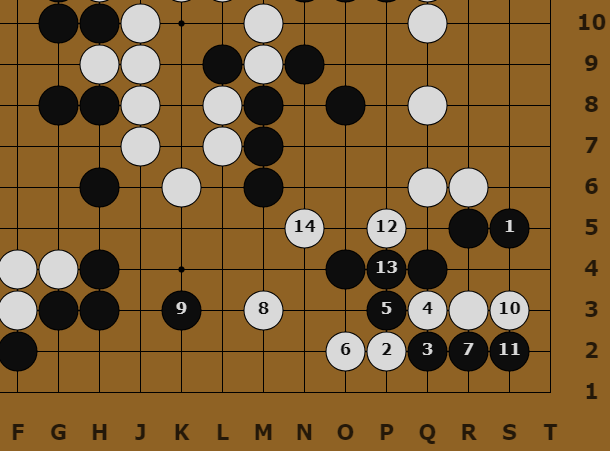 Not sure exactly if it works, but once again it looks sketchy. Probably meaning that white escaping at 8 needs to be addressed from the top instead.

Checking with KataGo, from move 126 it keeps pointing to black having a forcing move at L6, which helps to strengthen black’s lower side in sente. For example from move 130: 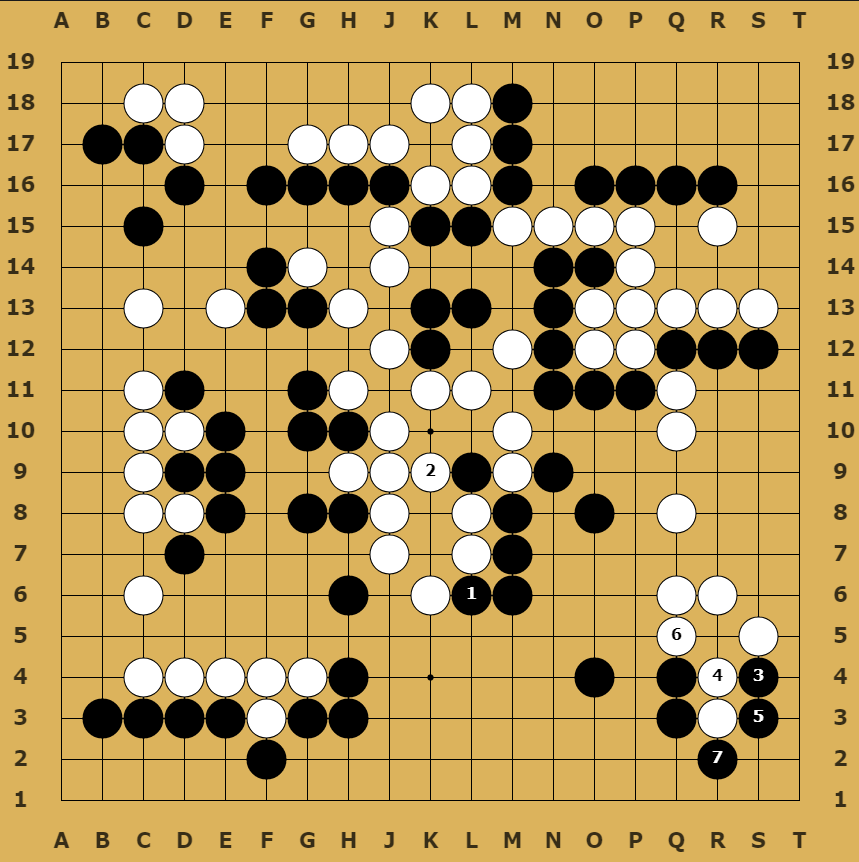 With more active endgame play like that after move 127, black could still have kept white’s lead limited to ~4 points according to KataGo.

Would you in your own game after playing l6 instead of b17 say that my group on the left is safe and if I don’t play s5 right now I will lose very bad? I guess integrating this feeling would be the thing to learn from this game. Because somehow I didn’t feel like so.

Spotting L6 is difficult for me when casually checking someone else’s game by myself. I might spot it in a slow game of myself, but I’m not sure. Many AI moves are only obvious in hindsight.

But I don’t think I would have played B17 on move 127. If I took the time to count, I would probably have come to the conclusion that black can’t really afford to play it. I feel it’s unlikely that that group will die and even if my opponent manages to kill it, I prefer to lose like that than losing by falling short by 10 points. But that’s just my personal preference, I suppose.

Many AI moves are only obvious in hindsight.

Yeah it’s the reason why I don’t usually review with AI when it’s a matter of “game sense” rather than particular sequences. AI has no feeling and even if did it’d have no way to communicate it. Meanwhile the feeling and intuition is a huge part of human’s play. So I was trying to figure out if I had a wrong perception of the position.

So I was trying to figure out if I had a wrong perception of the position.

So around move 126-127 and the following play in the corner, did you assess the territorial balance during the game? Because black seemed to be playing as if he felt ahead.

I don’t usually assess the territory in my games, I just go by intuition. In my mind I’m just accumulating the exchanges throughout the game as good or bad for me (locally and globally) but I don’t concern myself with points (or rather “the count”, because about points I do care a lot) almost at all. But my perception was that even with the invasion it should still be close or that I should be slightly ahead. I guess maybe I tunnel visioned and underestimated how much I gave white on the right by not sacrificing my centre stones, which I have considered, but at the time of deciding whether to pull them out or to sacrifice them I thought it would be about even.

I don’t usually assess the territory in my games, I just go by intuition. In my mind I’m just accumulating the exchanges throughout the game as good or bad for me (locally and globally) but I don’t concern myself with points (or rather “the count”, because about points I do care a lot) almost at all.

I think that kind of intuitive positional judgement is a viable method to evaluate the game in the opening and middle game.
But I also think there is a risk of not paying enough attention to the transition from the late middle game to the early endgame. Intuitive players of strong kyu to low dan level may underestimate its importance. But in that stage I think it’s especially important to be aware of where the biggest endgame moves are and how the balance of territory is.
I can understand if you don’t really like to count, but at your level I think regular counting in the later stages of the game is neccessary to play good endgame and win close games against opponents of your level.

I used to be a more intuitive player, and I used to be pretty bad at winning close games, so I would usually try to win by very aggressive play in the earlier stages of the game. But InSeong Hwang’s lessons helped me to become more aware of the need to evaluate the score regularly and pay more attention to the endgame. I feel that my endgame has improved as a result.

Ofcourse I still make mistakes in the endgame such as move 176 in this close game Ladder Challenge: gennan(#14) vs peipeipei(#9) (I knew the game was close, and I considered the AI move, but I played the game move instead because it felt safer).

And I overestimated the size of the endgame in the upper left corner while understimated the size of P18 in close game Ladder Challenge: cris01(#21) vs gennan(#18), faling behind because of it (although my opponent let me get really close again after that, and I was aware that in the end I was getting close to reversing the game).

But I can also win some close endgames, such as Ladder Challenge: AlGebr(#8) vs gennan(#6) (I was quite aware during the game that it was close, but I knew I had an edge in the endgame)

Actually I’m implementing this idea recently already, but I still don’t count. My idea (still work in progress) is to work on the continuity of the game stages. Like people often say “your early game sets up your middle game”, which is a phrase that came to mean nothing to me because I heard it so much, but I never thought of drawing the same link between middle game and endgame. So recently I’m trying to make the decisions in the middle game that would positively affect my endgame later in the game. Through that I also became more aware of points and became better at the endgame in general.
However I still don’t count because I don’t see a point in it. Don’t get me wrong I would definitely count in a long winded tournament game with lots on the line, but I would do so as a safe trigger for me to be able to close the game up properly rather than as part of my general “skill”. But in online games that are less serious I don’t see a point in counting. I just play “the best move” from move 1 to move 350, so I don’t see how knowing the score would affect this for me. As I said for instance in a tournament game I would go ahead and try something out to maybe get an edge, but it’s a special tactic that I don’t want to have a habit of implementing in my general gameplay. Mainly because I don’t care that much about winning or losing as much as I care about playing a good game.

If your intuition about the best move is rock solid and already includes endgame considerations without counting, then I guess there is no need to count.
Sadly, my intuition is not that strong. I feel counting helps me to know where I am, so I can decide better about which way to go.