Maybe chess inherently offers more opportunities for time-suji moves, such as (premoving) forcing moves, that you can play regardles of their move?

Edit: I now realize that without any time increment, time-suji moves wouldn’t help much. So you’d have to autopilot much of the game to play ~80 moves in a minute. I guess it helps that some chess positions end a bullet game immediately (checkmate, and probably many drawn positions), while go doesn’t have a forced game end. Your opponent can always stall the end of the game in go.

As an extreme ultra blitz player lover, 2 seconds is barely within my comfort range. Most of the go population can barely play this fast while thinking, to begin with, and I had to practice from 5 seconds deliberately ignoring my reading and just playing on instinct for quite a while to get this far if you call it an achievement. I can say for a fact that 1s per move is unfeasible and should not be ranked.
In fact, I’d also like to strongly recommend others to read the time settings that people propose. I also think that for 19x19, game scoring should be automatic if the time setting is less than 5 seconds per move, 1 byoyomi.
If we were to strictly enforce minimum time settings, I would set it at 5 seconds per move.

This is false. @stone_defender and I have proved that it’s possible to finish also a 19x19 game: 🐬Sofiam🐬 vs. stone defender
But I agree with you on the fact that this kind of games should not be ranked, as I already said.

If we were to strictly enforce minimum time settings, I would set it at 5 seconds per move.

5 seconds may be a bit high as a limit, but it is better than no limit at all, IMHO.

I meant 1 sec byoyomi, since I feel like any additional time on top of that like the 5sec + 1 really depends on how much extra time you put.

I feel like any faster than 5 seconds and you’re really limiting reading capabilities/basic instincts of the game, which should be enforced for a ranked game.

why on earth would anyone play blitz byo-yomi??? fischer is the obvious time control for blitz… (or really any format as it’s basically just superior in every way)

besides absolute time its the fastest time setting, its basically 0+1sec

you can make any time setting the fastest, 0+1sec BY is the same as 1+1max1 F… but I think the ability to alter the max cap is more flexible than integer additions of b-y periods

The discussion is whether it’s feasible to average under 1s per move over a whole game, not whether literally every move is under 1s

all other opponents timeouted. Unlike them, I knew what to expect, but it was impossible to play something better than ddk level.

if you played it every day you would improve though, it is just a different skillset to longer time formats but not an unskilled format as some propose

Exact time setting :
Fischer: Clock starts with 10 seconds and increments by 1 second per move up to a maximum of 10 seconds.
still no time to waste.

There should be milliseconds timer on stone with 1s/move byo-yomi or 1s increment.
Imagine 5s/move game without timer. It would be hard to estimate how many time left.
But 1s/move harder!

Because I have no information of how many time left, I just have to place stone as fast as possible. Its hard to start to improve where I place stone with this “blind” timer.

So that’s another reason why 1s/move shouldn’t be ranked now(while timer not improved).
Current OGS timer literally don’t gives to user information when you are going to timeout.

Yeah 100% I think any time total time remaining is under 10s display should change from MM.ss to s.mmm

Surely at least hundredths. I’m willing to concede that thousandths are too much.

My impression is that if fractions of a second matter, you don’t have time to check/realise how much time you have left.
But it’s better to have the possibility to check them of course

Didn’t follow this entire thread, so maybe I missed something.

I wouldn’t mind if there was an option added of minimum time per move. 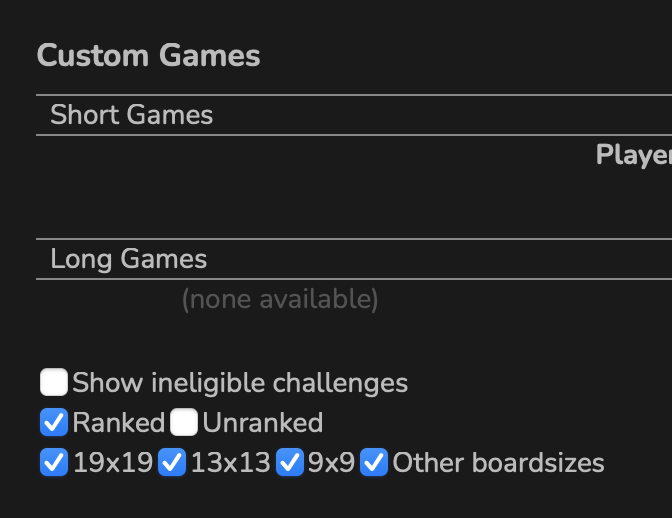 I played recently a lot of 2s/move games. It is much easier than 1s/move.
1s/move should be unranked, but 2s/move actually makes sense on ranked, on 9x9 at least.
Situation where opponent actually ahead and then timeout is rare on 2s.
People usually timeout here just instead of resign. Its hard to press resign and then ok. When complicated situation(which is not on your side) happens, it makes more sense to try to invent something.

I think you’re right. This makes the “evidence” in this message meaningless, I was winning all of those games except one.

I don’t have much experience with 2 seconds per move, I am/was testing 3 recently. 3 seems completely doable and timeouts are rarer.