There is no sense in limiting number of possible ranked values.

There is lots of sense in homogenising what a ranked anything looks like in a certain system, almost all sports have unified agreement on how long a game lasts within certain formats. However, I have no intention of laying out those arguments here. So you can either take me at my word or dismiss it, I don’t mind which.

IF 20s/move and 50s/move both allowed and both counted to single main rank, there is no sense in forbidding 35s/move ranked

I think I agree with you, especially after the 10 games I tried yesterday. But they can’t be compared to “normal” games IMHO.
I’m probably not the best player at this speed, but what I realized is that I play very bad moves, sometimes. 1 second is very very short

In the 4 examples I posted, for example, I missed some killing sequences that I would have played with 3+ seconds, IMHO. I won them anyway, but if I can I always go for the kill.

I think the games I played yesterday against zhangpingchuan are quite normal and similar to what we would have played with longer time settings, except maybe this one (see my d4 or their f1)
Here white played h8 instead of h2. It’s very hard to make the right choice in one second. I’m sure they would have played the best move with more time.

No blaming intended, of course. I used these games because they’re the only examples I have.

I agree, of course

I suggest we use something like the following function to determine whether a game can be ranked:

Maybe there could also be a maximum amount of time per move that would trigger the warning sign for live games? Like if the total estimated game time is greater than 4 hours or so? (see topic Slow live time setting)

To compute an estimation of the (soft) max total game duration, you could use something like (per player) softMaxTotalTime = basicTime + 120 * increment. And perhaps apply a reduction factor for byoyomi (maybe 0.5?), because in general byoyomi gets partially lost, which doesn’t occur with Fisher increment.
I haven’t figured out yet how to account for Fisher maxTime. 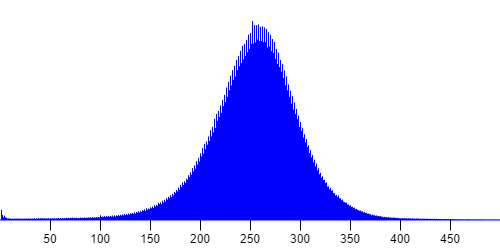 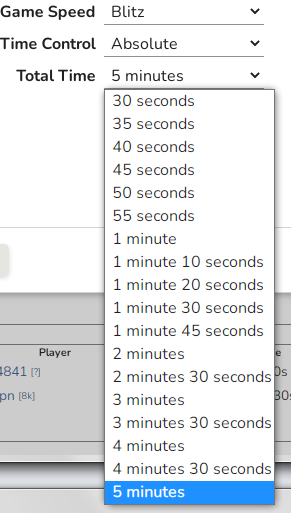 Besides premoving, isn’t that just a 1s increment they’re often using in bullet?
If you use less than a second to move and the software records the actual time used client-side between showing you the opponent move and you responding (compensating for various sources of lag), you would be building up your time reserve.