I think that might be the point. It seems like white played on the wrong side in game. Just grabbing the sgf from https://www.eurogofed.org/1st-china-europe-match/pairings-results.html and asking katago 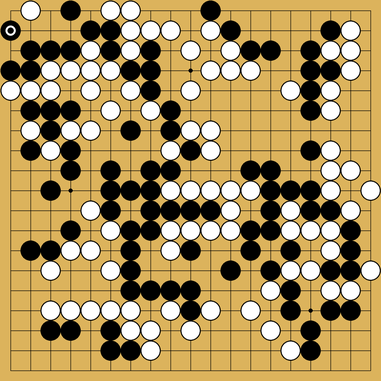 Wow, that is quite shocking. He was ahead, and it doesn’t look hard to read you had problems with the bottom group. Was he short on time? Did he misread the bottom and wanted to win a bit of yose on the top? Even then, S7 looks like decent yose for the bottom.

4-2 for China, next match tomorrow against Lukas Podpera.

Edit : I read the comments. If I understand correctly, he didn’t want black to get R13 in sente because this helped him with the attack of the center group, and misread the tactics at the bottom. As the commentator said, this is very sorry for white.

The comments say he was playing very fast during the game and was banking up a good bit of time - whereas black was using up their time. It is mad though

Wow. This is one of the worst blunders I’ve ever seen in a high-level match.

What was he playing at…

If I remember correctly he had around 20 minutes left on that move.

some people get the game and result of Lukas ?

It will be played in about 5 hours.

Already move 7 is… wow. Is that a misclick ?

Edit 2: Alexandre Dinerchtein lost by resign. Such a fighting game!

Server connection was constantly breaking in the middle of the game. The board is there, my last move is there but the clock is ticking and it’s unclear what to do since everything is in Chinese. I reloaded the browser multiple times and lost several byo-yomi periods due to that. All the while KGS is stable, no disconnections at all. But generally he’s stronger than me, I think even under normal circumstances I wouldn’t win. So I won’t appeal, let him play. I think he has a chance to win all the other games.

Some of the people in my go club were trying to meet on KGS earlier today and it just kept disconnecting everyone, even during games. So they ended up playing on OGS.

I thought that the debate on KGS’s server stability was already over after April 2019?

one might have expected things to improve a bit. I guess it’s not so clear once again

As far as I’m concerned, anything that requires Java is dead. I have no intention of ever installing that Pandora’s Box of security vulnerabilities on any of my machines, and won’t spin up a VM for the sole purpose of playing on KGS.

Tomorrow it’s the turn of Mateusz Surma 2p. There’s only Artem and him left for Europe now.

Edit: Yep, Yu Suhao won by resign in the small yose. 8 in a row for him.

One of my ‘go-friends’ from Portugal asked me today about the Chinese team: is Suhao the only member of it lol

This is like a dagger fight in a telephone booth.

Artem resigned. Suhao won nine games on his own, and ended this tournament. In this game white started three battles without well preparation, so all of them led to Artem’s loss. At last black successfully connected his series of stones above back to home, announcing the actual end of this game. Congratulations to Team China and Suhao. Also I wish, and am pretty sure, that the 2nd tournament will have more great players and splendid games!