Since around a year ago i made a topic for my 1000th ranked win, i feel like its worthwhile idea to make another one as celebration of my 2000 ranked games here (hey camon its good to brag sometimes ^_^)

So here’s the pie, glorious 2000 ranked games with my main account \o/ 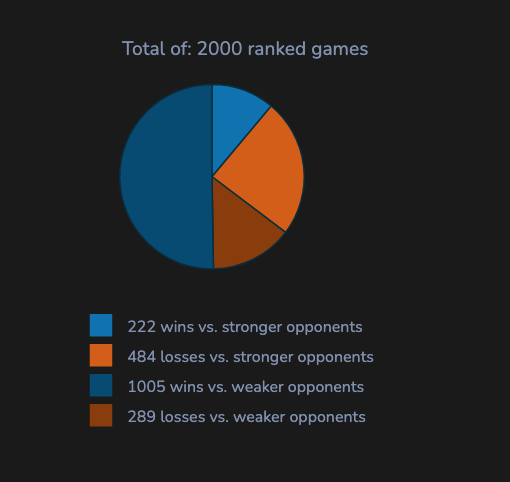 No wonder it took so long to reach this, only mere 10 of those games have been blitz XD
Vast majority of those have been correspondence - 1469 to be exact - and everyone whose played corrs with me knows how slow player i am >____>
The rest (521) have been live games, which is actually more than i thought ^^

Oh right, and in total my game history has shows around 3570 finished games, so more than half of those have been ranked \o/

haha indeed, most of those games have been tournament games so i blame lazy dans for the lack of their participation! >_____<

I wonder how often you have played Sofiam.

Also strange that we never played each others so far, given that we are somewhat close in strength and both play a lot of correspondence tournaments. (Well, you a lot more than me, but still.) Well, we’ll be paired in the through the years tournament eventually if we both live to see that day.

according to got stats total of 45 times, she’s my 2nd most played opponent xD
Tho not all of those games have been ranked ^^

There are different ways to see this.
The side where you haven’t yet reach the top of your performance which is great
The side that it takes you so long to go there and the fact it’s not even sure you will reach it which is a bit less great.

hah im slow player, what can i say!