Haven’t experienced that myself.
I just look at rank difference, and only open challenges for people with a max difference of +/-1 in rank.

In case anyone’s interested, the “rank - worldwide comparison” page on Sensei’s Library needs updating. But how?

Why do you say that?

It’s always been wrong. I don’t know what it’s based on. I checked it like 2 years and it hasn’t changed.

Guests are 5 kyu now? Maybe its better to move them to the end of chat list? 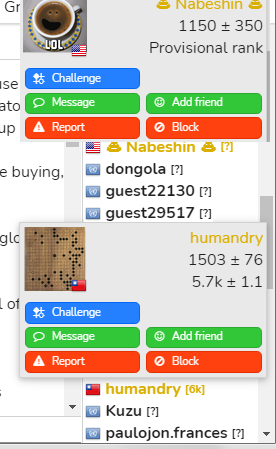 There is something wrong with sort of any [?] account
names sorted by rank, but better rank is places below worse

update: it seems they are 6k, not 5k, but 7k still has higher glicko rank but placed below

It also happens in groups, all the question mark accounts seem to be pushed to the first page in the members lists.

Didn’t know it, I understand.

I have no way of knowing my AGA or other ranking, but my jump from 14k to 9k cannot be right! I understand that your dan-level rankings are wrong, but increasing the rank of the lowest-ranking players by a very large amount cannot be correct.

While I haven’t played much here at OGS, I played a lot with ranked players in the 1980s, and on IGS and KGS in more recent years. I think I have a feel for how I’m doing, and it just doesn’t feel right to be called a 9k player. Has OGS management actually tested three or four OGS players of widely separated rankings to see whether the new OGS system truly accords with AGA or other recognized rankings? If not, I suggest that this be done very soon.

but increasing the rank of the lowest-ranking players by a very large amount cannot be correct.

“Cannot”. A very strong conclusion . Do you have data to support that?

Has OGS management actually tested three or four OGS players of widely separated rankings to see whether the new OGS system truly accords with AGA or other recognized rankings? If not, I suggest that this be done very soon.

Did you see this bit:

One major focus on this improvement was to align ourselves in some way with the AGA and EGF. Generally speaking, an EGF rank is about 1.5 stones stronger than the equivalent AGA rank, so we aimed in the middle, targeting a spot inbetween in the 1d - 3d range. So, if you’re within that range on OGS, you should be within about a stone or so in either organization.

However our SDK and DDK, and high dan ranks, diverge a bit more from both organizations. Generally speaking you will have a higher rank on OGS than either organization in the low SDK and DDK ranks. We feel this is justified and more correct for us given the handicap win rate analysis for both games here and at the organizations.

A change for OGS people feels un-natural because we are all mostly calibrated in our sense of what the ranks achieve based on our play here.

For every personal anecdote about experience elsewhere being one direction, there will be a personal anecdote in the other. For example, when we had an influx of folk from another server, not that long ago, they all reported being beaten here by players well below their ranking on the other server, and thus ending up lower ranked here, on our previous ranks. IE our ranks were too low compared to the other. Anecdotally.

Ultimately the data is what counts, and anoek’s description of the process indicates that this whole thing has been highly data driven and continues to be so.

I understand that your dan-level rankings are wrong, but increasing the rank of the lowest-ranking players by a very large amount cannot be correct.

To say it in as few words as possible: anoek tried to make OGS 1d fit nicely between AGA 1d and EGF 1d. All other ranks are based on 1 rank difference being equal to 1 stone handicap, which has been based on data from actual handicap games.

Did you see this bit:

In life, as in Go, it always pays to read it out first!

Based on a gut feeling, you can’t believe it might be correct.
This does sound rather subjective, and not backed up by evidence.
Why not try it for a while? Give the new rating & rank adjustment system a chance.

Looking at your last couple months of history you seem to be winning and losing at an appropriate rate against 7-10k players. So if the ranking and matchmaking sets you up for even games, then that’s what the system is for

Perhaps we shouldn’t display kyu/dan ranks at all, and only show numeric ratings

My reasoning for this (non-serious) proposal is that a less human-readable number means that people are less likely to tie it closely to their identity and get attached to it.

So to be on the safe side, we should show ratings in hexadecimal ( #6C1 ) or braille (

If we switch to a new display system every month (to prevent anybody getting too familiar with a particular system), I’m sure there will no longer be any complaints about ratings being incorrect

On the flip side, a lot of people do like the traditional kyu-dan system and some feel really good for finally reaching the dan ranks after the ratings boost.

Since it could possibly make a lot of people very happy, why don’t we just make the lowest rank one dan and then count up from there, say to around 34 or 35 dan as max. Then, everyone can feel good about being a dan!

We could even give our server a new name:

@anoek , it seems problem is bigger than just sort of names in chat

and there is also this

3 places where system thinks that [?] are 6k?
Coincidence? Or they really work more like 6k than we think?