In several recent games I played this opening as Black: 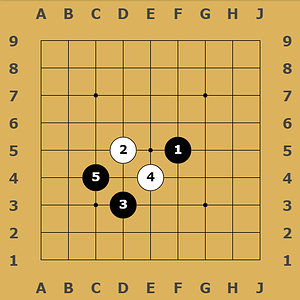 Pasted image537×538 14.4 KB
What do you think of this? I like how White is kind of squished in the center while Black takes edges, but still White can attack one group, get stronger and kill other. Also Black stones 3 and 5 look weird and the corner is still open for placements like B2, maybe Black 5 should be played somewhere else?
Demo board if it’s any help: https://online-go.com/demo/168881
Samraku July 11, 2016, 9:09pm #2

c6 would be the shape point iirc, but it looks interesting. Though, isn’t one of white’s win conditions (according to mark5000) to split black in two? But I’m really bad at 9x9, so I could be wrong.

I think this puts B way ahead, as the lower left is easy to defend. But with the next move W attacks 1, giving W roughly equal strength. In other words, neither side has much of a real advantage after these moves. I doubt they are joseki. Furthermore, I think that making moves in the middle like this isn’t very significant, because of the complexity allowed in the future development. If you want a strategy that is more predictable, you must play closer to the edge. All of these statements are just my opinions, and may not be worth much.

yeah, I wouldn’t be too happy with white playing near G7.

W is in danger of being boxed in at D6 and F3, so he has to do something about that. Three stones in a diagonal here would divide black, but claims no territory, so perhaps D6 or D7 is best, or perhaps C7 or F7, I’m not good enough to tell. However, B can then play either F3 or F7, marking out a lot of territory. I think B has an edge,but not yet enough to overcome W’s komi. BTW, it is standard in 9x9 to play from the center outward. The strategy is very different than 19x19.

I suppose so, but I play many 9x9 games and it seems to me that the strategy needs to depend on the relative strengths of the player.

If I play a weaker player, I play greedy (loose) moves with some route back to safety, hoping that the resulting complexity will favor me, both in contact plays and in sketching territory.

If I play a stronger player, I try for equal territory and equal numbers of weak links (safety and balance) during the beginning and middle games, frequently playing the 3-3 points first. I think of this as conservative play. The hope is that I can find clever but safe moves to get ahead in the second half of the game.

But note that I’m only 16k, so my ideas may not be worth much. At least I’m sharing them. Just try to find a useful discussion of 9x9 strategy on the Web…

If you’re looking for 9x9 strategy, I think this is a very good starting point… full of useful ideas.

As for the OP question, I like White in that situation. Black lower left corner seems small (9-10 points at most). If I were playing White, I’d simply attach to those stones (with C5 and E3), and then start an all-out attack to Black 1 with G7.
Black will find a hard time saving his stone, while White could build territory in the attacking process. That, added to komi, should be enough to win the game (unless I’m overlooking some Black strategies).