I’ve participated in several threads here recently about scoring and how the current design is deficient and should be improved. Here’s yet another example of the problems caused.

r/baduk - I am confused by multiple things here. I played a bot here. Why did it... 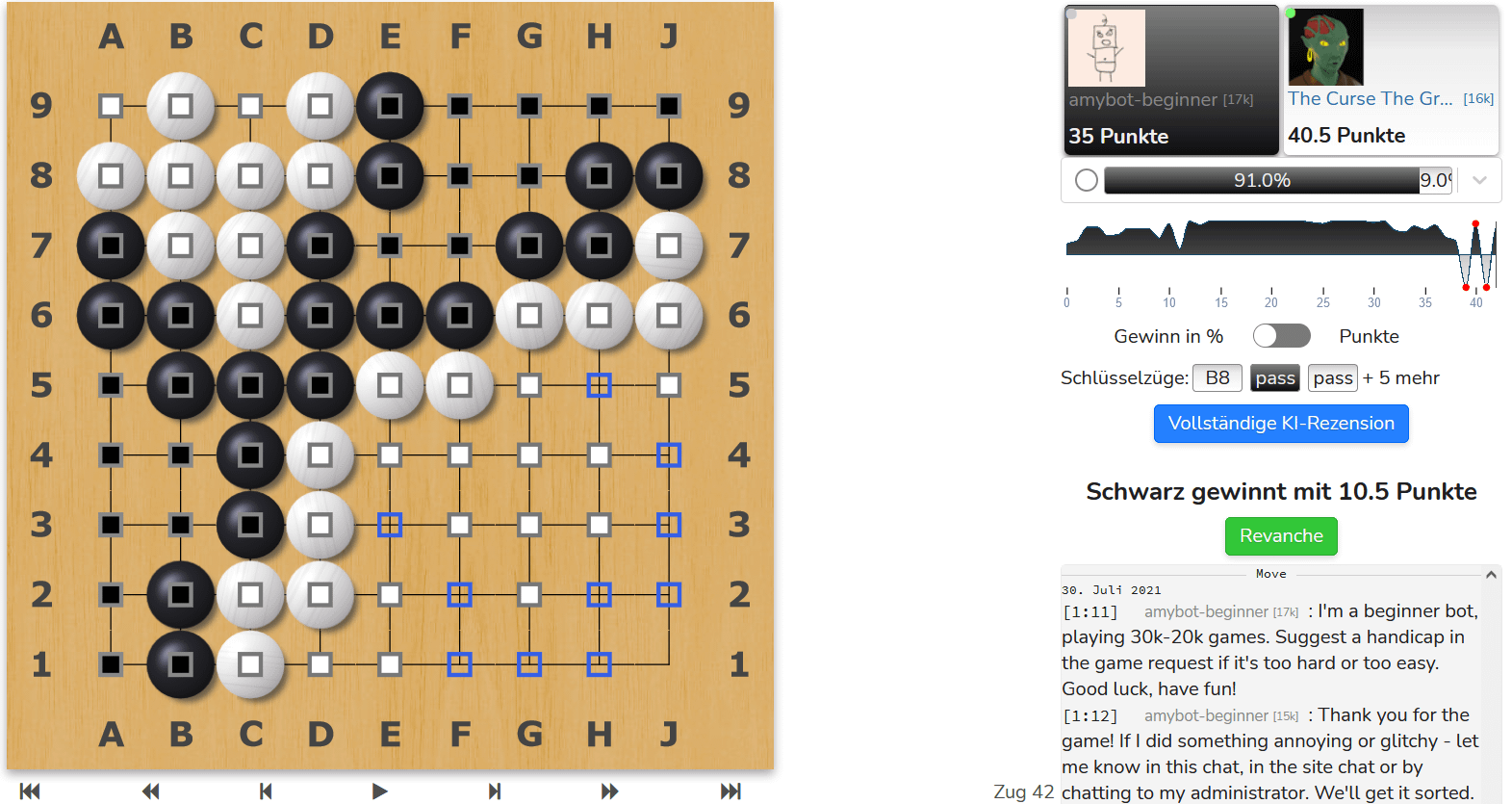 8 Likes
AI based score estimation and auto-scoring is now live
Still no rengo?
2 player board on the same computer
Is the scoring clock reliable?
Kosh July 30, 2021, 7:17am #2

From my own observations, the current scoring system struggles with three issues.

There’s no resume when playing against bots though right?

Fair point and people are often tricked into passing prematurely because the bot passed first. Such games can only be annulled (if the winner is incorrect). The score in the OP is wrong. Since Black didn’t invade, it’s White’s territory. No argument from me.

I think what examples are showing is that having Katago score the game for beginners against bots has issues and since there’s no chance to fix it (because the bot can’t argue if you just mark all their stones as dead) you get games that are scored probably more incorrectly than if a non-intelligent estimator scored the game.

I heard Fox does scoring really well. Any truth to that?
Just bringing this up, because someone on that reddit thread suggested KGS for beginners because they have better scoring.
If Fox does scoring better and has more players, I guess beginners should just play there.

Right. A super simple “players manually mark the territories” approach works better here than a clever bot barging in with insight that there are cuts which mean the lower right is unsettled: if both players agree to finish the game now then the borders are closed and it’s simply white territory and there should be no resumption. And a really basic algorithm from the 1960s to automatically identify territories based on being areas surrounded by only 1 colour would save them those 4 clicks as there are no dead stones in this game. In general there are dead stones so you need a cleverer algorithm from the 1990s (like on KGS) to identify those correctly and deal with life and death questions. Such algorithms aren’t perfect, but work better than the too-clever-for-its-own-good AI on OGS and then the scoring tool should allow players to manually mark dead stones / territories to correct it. Including bot games. You could then use AI to compare its result vs game result to bring possible score cheaters vs bots to the attention of the mods, but the auto-apply-AI-score-to-bots-game rule is demonstrably failing.

And that screenshot with some intersections in the lower right territory and some dame is total nonsense that violates the scoring rules of Go and should be obliterated with extreme prejudice of nuclear warfare.

The players should not even mark their territories. They should only need to mark dead stones, if any.

violates the scoring rules of Go

The final scoring system should at least obey the rules of Go!
I can understand a situation like this arising for a score estimator while a game is in progress (and would be a good example of SE giving too much information ) but for a final score this sort of display shouldn’t even arise.

Right, that a score estimator answers the question “What will be the likely score / territory status if players continue playing sensibly (for a strong estimator) / stupidly (for a weak one) from now?”, which is a very different question to “What is the score of this position right now?” is lost on many people that I consider score estimators quite possibly do more harm than good for beginners.

That last picture is what I am against. You are using a score estimator as a scoring tool. They are different. Their conflation online leads to so much beginner confusion. Teaching beginners in real life this problem simply doesn’t arise. You say “maybe it is against some old rules”. I say “it is against all current rules, and inventing new rules to make this valid is introducing bigger problems that the one you are trying to solve”. If you allow that, you also allow saying j3 is black, j4 is wh…

and then the scoring tool should allow players to manually mark dead stones / territories to correct it.

I think this is the potential issue with human vs bot games, the bot like amybot can’t argue if the player suddenly decides that in fact all it’s stones are alive and some invasions that didn’t work should just be considered seki.

You could then use AI to compare its result vs game result to bring possible score cheaters vs bots to the attention of the mods,

This probably could be the solution to that, but it might still flag a) a lot of games, and b) games like the one in the OP since katago potentially will disagree with the score, and the result might depend on who’s turn it is, who passed last.

But yeah the randomly marking points as dame inside a territory should be sorted v quick.

There is difference between estimating and scoring. In scoring 100% sealed territory should be 100% painted even if insertion or cut is possible. By passing opponents say that they will not continue, so simulating future battle is just error by system. 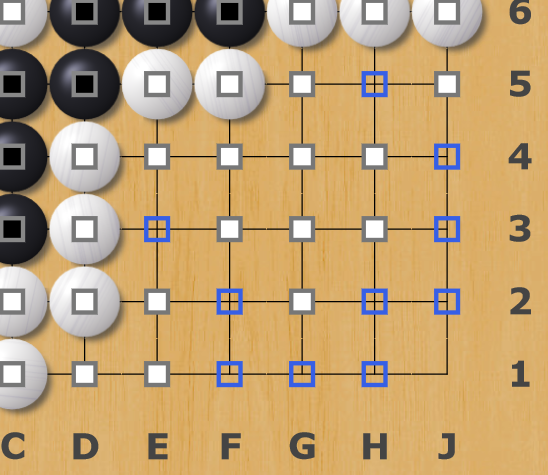 I see easy fix algorithm there:

And if there is a black group inside, all intersections connecting to both black and white should be marked as neutral, unless the black group is marked dead (agreed by both players).
It’s just a simple flood-fill algorithm which doesn’t require any intelligence by the program.
A simple tutorial with perhaps some practice puzzels should be sufficient to teach novices how to score a final position.

I don’t think that the algorithm to score a final position should go out of its way trying to accommodate players who are so new that they don’t know anything about life and death. There is just no way to fix that problem, other than teaching them the basics of life and death.

I don’t think it should be taken for granted that scoring should even use an estimator.

It’s not a bad idea, imo, to have all stones marked alive at the beginning of scoring and to require all dead stones to be manually marked.

If one’s spent 30, 60, or 90 minutes playing the game then surely thirty seconds can be afforded to the scoring.

Beginners are confused from the very beginning, it’s their natural state. Looking at it that way, scoring system helps them figure out scoring. A mistake here and there isn’t a big deal.

Such algorithms aren’t perfect, but work better than the too-clever-for-its-own-good AI on OGS and then the scoring tool should allow players to manually mark dead stones / territories to correct it.

We had a different scoring algorithm before that was not based on AI, and my experience is that we got a similar number of reports of incorrectly scored games, if not more. At least the current problems with scoring make sense to me, while the previous problems were just very random or weird. The main issue back then was seki being marked as dead, or dead stones being marked as alive. It’s very hard to write an algorithm that can decide life & death or seki without playouts.

Since the AI algorithm launched, the moderator team has been keeping track of incorrectly scored games in an internal thread, and I believe to have found an improvement to the current algorithm that solves 95% of the current mistakes it makes (which are mostly about territory with open borders or KataGo reading out L / D beyond the players’ abilities), but that’s not implemented (yet).

And if there is a black group inside, all intersections connecting to both black and white should be marked as neutral, unless the black group is marked dead (agreed by both players).

This is currently how the score can be marked by two players, but this has problems with a lot of beginners who try to score games with open territory (and don’t see the problem, thus don’t resume the game).

If one’s spent 30, 60, or 90 minutes playing the game then surely thirty seconds can be afforded to the scoring.

You’d be surprised how common it is that people leave immediately after passing.

Since the AI algorithm launched, the moderator team has been keeping track of incorrectly scored games in an internal thread, and I believe to have found an improvement to the current algorithm that solves 95% of the current mistakes it makes

For those interested, here’s some snippets from that thread with my improvement in demonstration.

I’ve thought of a solution for bot games being scored incorrectly as well: how about we just disable the human player from changing the score, but still activate the scoring phase? They have only two options: accept the score as is, or continue play to fix the problem in scoring.