Hi, guys. I’m working on a decentralized go game app. The basic idea is to put go game on blockchian.

This is the design I just worked out. 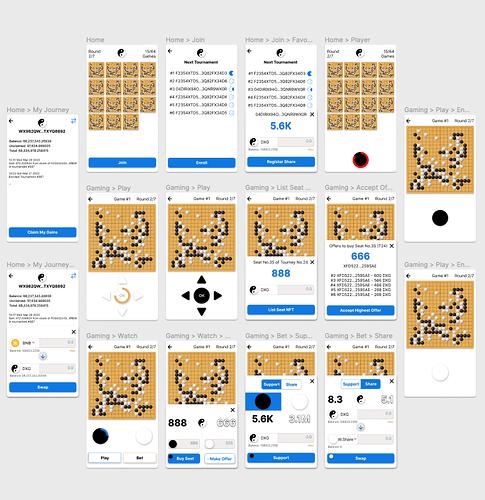 The initial idea came about to make a Proof of Excellence block chain mentioned in the peercoin whitepaper, I made 3 articles to explain some details here

Read writing from Ragnar Doge on Medium. Crypto Enthusiast, Tokenize Everything!. Every day, Ragnar Doge and thousands of other voices read, write, and share important stories on Medium.

Tell me what do you think pls.

Are you doing this as an intellectual exercise, or do you think it’s actually a good idea that has advantages over a centralised go server? How does the clock work? I’m generally skeptical of anything blockchain buzzword and don’t like the energy waste.

I think this is a proposal to use Go games as POE instead of electricity. Did I get the wrong end of the stick there?

Intellectual exercise or not? I don’t know actually, it’s worth trying at least.

Where’s the clock? We can use block as clock tick. Let’s say, for a speed blockchain with 3s ~ 6s blocktime, 10 mins is about 200 ~ 100 blocks. If there’s no next move show up on the chain in 200 or 100 blocks, then the opponent could claim winning and get the award tokens. (This is vulnerable of DoS attack, but hopefully a high volume chain can make DoS attack relatively expensive)

About blockchain stuff I won’t explain much bcz itself is another complicated issue. The simple idea is that if we could make something decentralized, why not try? Advantage or not, I really don’t know until it gets worked out, but an alternative is not bad at all.

Yall with ur secret identities

You are right. The original idea, from peercoin whitepaper, is that use PoE to replace PoW as a consensus mechanism of a blockchain. What I’m working on is a “Token” on existing blockchain like Ethereum or BSC or Solana.

I used google to login in, should use twitter instead. haha

Much agree. Decentralization is kind of inevitable

About blockchain stuff I won’t explain much bcz itself is another complicated issue.

I suggest that you elaborate a bit more. This is a Go enthusiast community, not everyone knows what a “proof of excellence” would be useful for. I know a little bit, but I don’t understand how a DoS attack on your idea would work. You just throw it out there. Are you aiming to make us feel stupid?

Curious question: how does the scoring work? If we need the two players to agree on counting or life&death, doesn’t that open up a far greater vulnerability?

Solution in search for a problem?

Made some visual materials about the design, non-players could participate by registering share before the tourney to share the winning award, trading share during the tourney; or could support their favorite side and win the reward after a single game. 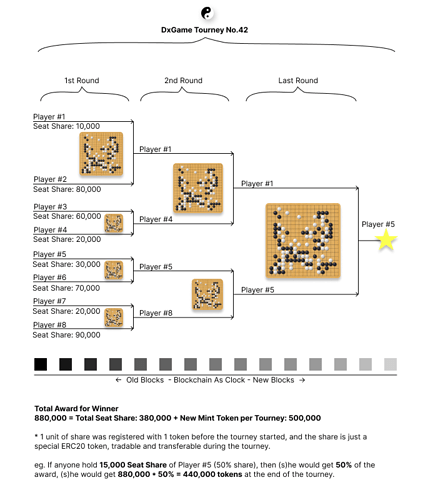 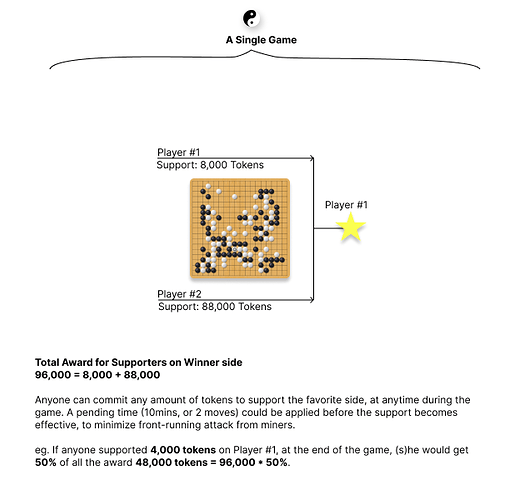 A design of PoE ( Proof of Excellence) token #3 — Visual Design

I’m still completely baffled. Is the idea to make a new way to play go? Or to make crypto by playing go?

And is it possible to explain in non-technical way how this even works and is better than other go servers? Maybe start with what “Blockchain as clock” means and also what “proof of excellence” is or does.

For reference, my level of understanding is that Blockchain is a kind of database that is held between a bunch of nodes and is added to with some maths challenge (proof of work or something), which ensures that all nodes agree on what is added. And once added changes are not possible (unless someone controls enough of the nodes or work power or something but in practice this rarely happens).
I can sort of see how transactions can be recorded.
Are the go games (moves?) here transactions? What is recorded in the Blockchain?

How does one challenge someone and choose say, blitz byo-yomi or correspondence Fischer?

A way I could see Go and blockchain usefully combined is if rather than doing loads of pointlessly difficult maths problems to warm the planet and mine *coins, you instead did KataGo training games.

But the scores and ranks are not tradable and transferable.

That sounds good to me. Why should they be?

Decentralized game with “token” can bring good game players profit directly. If anyone is very good at the game, can win tokens and exchange the tokens with ETH or BNB

You do not need to be good. You could just plonk stones really fast and send a PM to the other player that they will let you win next time.
Not to mention that some people could just plug in their local training AI Go software and just wipe the floor with everyone. Who is going to moderate that?

What is recorded in the Blockchain? The go game logic, and the moves (transactions).

Everyone has to download the entire blockchain to join it AFAIK.

The OGS database dump by za3k is huge. 6 GB compressed, 44 GB uncompressed. Imagine downloading such a huge thing before you can play. Nobody would bother.

If you circumvent that problem by having players use thin clients that don’t dowload the entire blockchain then isn’t it just a few central servers again?