A little game I made to practice counting quickly

I mainly made this for myself, but hopefully some other people will find it useful too!

Counting a real go position (in an ongoing game) involves several different skills, this is just for practicing the purely mechanical part of counting the territory on the board. I believe that by getting quicker at this part, counting becomes more fun, and you’re likely to start doing it more often in real games.

Cool website! After trying it out, it would be nice if it told you what the score was for black and white. This is mainly important when you fail and you want to check what you miscalculated. When you get it correct, it skips directly to the next board, which is good, but it might also be nice to have it display the previous score for black and white to see if you actually calculated it correctly or if you managed to get it right by dumb luck

Some are easy enough to look at the board without counting and just approximate the territories to choose which one looks larger. This method works, but may be misleading for people who try to repeat this same method within in their real games, because most likely the real games will have komi, which makes it a bit more difficult. Maybe there could be a “hard” mode which doesn’t have a komi of 0, and it could even change for each board.

First try a mistake, checked the about page: “Assume no komi”… Alright

Here’s my trick to counting: count in shapes of 5, they’re easy to recognise in a glance after a bit of practice: 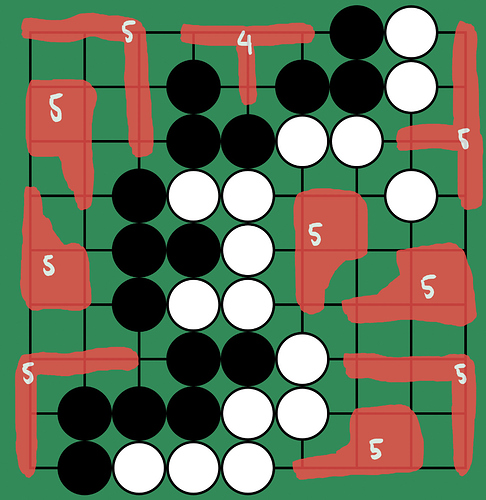 It’s often a combination of ‘blobs’ and ‘hooks’ and ‘T-shapes’ when convenient, also it’s easy to remember multiples of 5.

Anyone has other strategy or useful tips on how to count?

Interesting, I’ve never heard of anyone using this strategy before! I use the technique of counting in pairs (which has the advantage of making it very simple to count dead stones on the board), and try to recognize some larger rectangles at a glance (sometimes you can move some stones around in your head to make the shape nicer, just as you would when scoring OTB).

The main difficulty I have with counting, is counting one of the sides and then forgetting it while I’m counting the other side.

One idea to avoid this is to count up for one color, and then count down from where you ended up for the other color. This sounds better in theory, but at least for me counting downwards is slower and more error-prone. Could probably make it work with a lot of practice though!

I often try to make rectangles of various sizes too, but then I sometimes forget my running tally while figuring out the next rectangle.

On small boards, like 9x9, area counting is often quite easy, if the board is (nearly) split in half. You just need to count along the diagonal or central line, and account for any stones over the line. 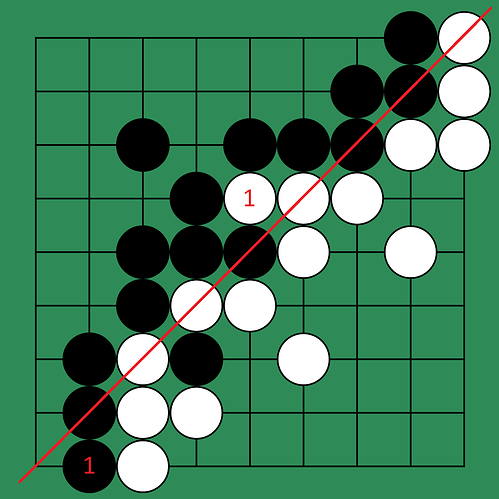 Black controls 5 points along the diagonal, while White only has 4. They each have one stone past the line, so those cancel out. Black+1

White controls 5 points along the middle line, while Black only has 4. They each have three stones past the line, so those cancel out. White+1. 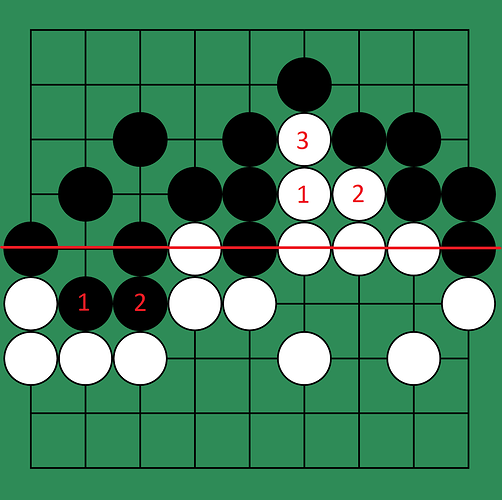 White only controls 4 points along the middle line, compared to Black’s 5. However, White has a one stone advantage (3 vs 2) beyond the center line, which is worth a two-point swing (+1 area for White, while -1 for Black). Hence, this last example is White+1 overall.

These are all one-point games, and it’s even more obvious by examining the center line when the margin is larger.

If both players have played an equal number of stones (and there are no tricky situations, like seki), the area count is equal to the territory count. This will be the case if both players have passed an equal number of times and White played the last stone. If Black played last, then that typically (unless that last stone is dead, or something more convoluted and rare happens) makes Black’s score one point larger under area scoring than under territory scoring.

I got two right in a row using that trick but then the black and white buttons disappeared! Oh doh that’s the game - meaning game over you’re slow.

It’s worse when you get something wrong and the buttons disappear you lose. 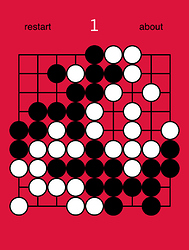 I wouldn’t mind a version that isn’t a speed one but gives the score at the end to see if you’re correct. Or even still a speed one, but the timer pauses once you answer and it gives you the score - then you can see why you got it wrong and click next board to resume?

On the old iPhone SE I need to scroll to get it to auto resize the screen. I wonder was I losing some time thinking it was gonna resize itself 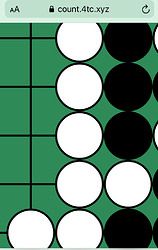 So then because it’s area scoring stones and empty points are equal.

So white +1 from the diagonal dividing line, stones either Side of the line are equal, but black has 1 more empty point, which is worth two points, so black+1 in the end. I think I counted by hand Black 23, white 22 (territory) although I kept getting different numbers for black

This actually could help my 9x9 game

I can solve tsumego purely on feeling and intuition without thinking about anything specific.

On this site its possible to do the same! Because all you need is to choose between 2. Easy fun arcade.

But I think there need to be difficulty levels. Or its would be impossible to reach maximum skill. What about different board sizes? Bot may generate games for non regular sizes like 6x6, 7x7, 8x8, 10x10…
Or timer?
So you lost if don’t click something in for example 5 seconds.

I would need 60 seconds for each one!

It would be nice to have a timer and also time increments. Something like "60 sec starting time and increments of 30 sec for each game solved " 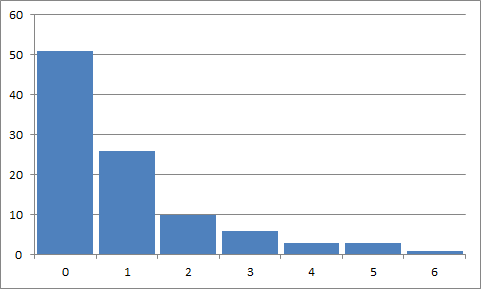 I play too much tetris so I count in tetronimo shapes

I’ve gotten 3 maybe as a record using that dividing line method where possible, and sometimes not actually knowing the score exactly but thinking it’s one colour by a couple - like counting up one side and subtracting for the other colour, but giving up if it hit zero and clicking to save time.

It’s very easy to “cheat” the game by guessing until you get lucky, so don’t think too much about the score.

What’s the point? You’re just simulating a geometric distribution, except doing so in a very tedious fashion.