Once upon a time, I thought that the idea of “misclick” in correspondence was kind of wierd. You have all the time in the world, how can you misclick?

Now I’ve had a run of three of them in fairly short succession, you’d think I’d learn, but there is an actual trap.

The problem is that the “Submit” button is in the same place as the “Back to Game” button.

I’ve recently been playing in the Fast Correspondence Tourney - where analysis is disabled.

This means that in those games, I’m poking around not in analysis mode, seeing what it looks like with a stone on the board.

So then cut to disabled mode game: plonking a stone here or there to see what it looks like. Thinking a bit, then deciding, “Nah, I will go over there actually: decided”, reaching up and hitting “Back to Game”.

Oh darn: that was Submit.

I fear this might be a hard suggestion to get over the line, because changing a button people use all the time is a bit of a big deal.

But I’d really like to see the Back To Game button placed differently to the Submit button.

(You could say “just don’t use analysis mode, you lazy git”, but I don’t think a proposal to remove that would fly either

Honestly I have never had that problem… but I don’t mind either. I only use the submit button in tourney games and once in a blue moon when I’m playing on my mobile phone.

But while you’re at it, can you please move the business card window that pops up when you click on someone’s nickname a little further toward the top? My mouse has issues and I double click more often than I would like to, and it always asks me if I really want to report that person…

That’s probably what I would have said too. I couldn’t even imagine it really being a problem till it just happened to me

I would be delighted to look at the business card as well, if I got permission to do this change

Do you think making the submit move button a different color might help?

The problem is that the “Submit” button is in the same place as the “Back to Game” button.

that pretty much says it all.
always thought I was getting back to game and then… ooops

Do you think making the submit move button a different color might help?

I don’t think so. You don’t normally look at the button. you just instinctively click the button.

An entirely new place for the button maybe a little hard to fit in the design. Maybe a double click or long press in the board area?

Yeah, I just made this mistake and submitted a move I didn’t want

Yay, its not just me then

Another new word for my vocabulary!

How do you feel about this: 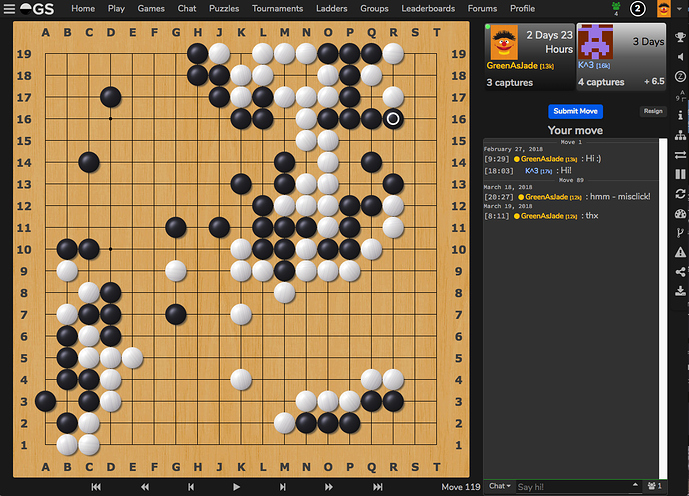 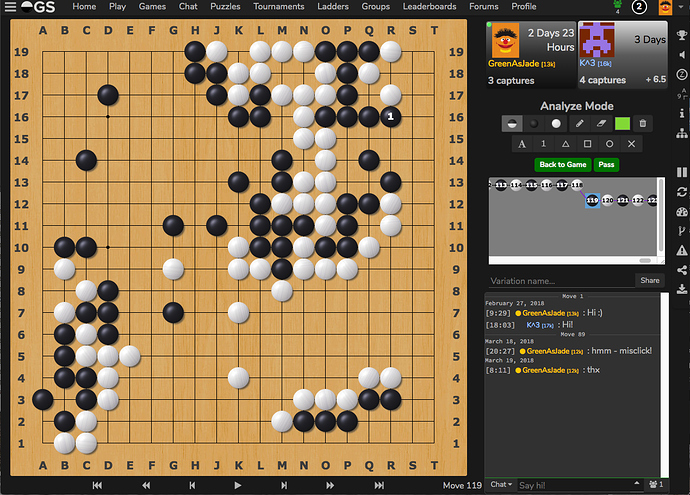 I like it because it makes it clear that both those green buttons are part of Analyze Mode: the Pass button in particular is not going to make you pass a real move, it is entering a Pass in the analysis pane.

problem is, those who misclick tend not to look. they know where the button is.

but this of course is a much simpler fix than making a new page design and moving the button.

I’m not sure if you’ve looked closely, but they are not only different colour, they are in a different position.

I’m about to update the pictures to show before and after. …

That’s because they are inside the Analyze Game pane, instead of on top of it as currently. If you wizz your mouse up to click the “normal” place for “back to game”, you will be pointing below “Your Move”.

ah yes, that would be very good.

just hope it wouldn’t be too much trouble for the web designer.

Oh darn: that was Submit.

It happened to me too.

And also this one: click on “Back to game”, browser senses two clicks, popup appears “Are you sure you want to pass?”.
Luckily it needs confirmation. Otherwhise I would have passed much more times than needed!

Your tweak would avoid this one too.

I’ve implemented this, over to the Devs to decide to include it.

The screenshots of what I ended up with are here: https://github.com/online-go/online-go.com/pull/606

If you think it will be a problem for you, now would be a good time to say!

But while you’re at it, can you please move the business card window that pops up when you click on someone’s nickname a little further toward the top? My mouse has issues and I double click more often than I would like to, and it always asks me if I really want to report that person…

Can you show me a screenshot? It looks pretty well positioned for double-click-prevention on my screen: 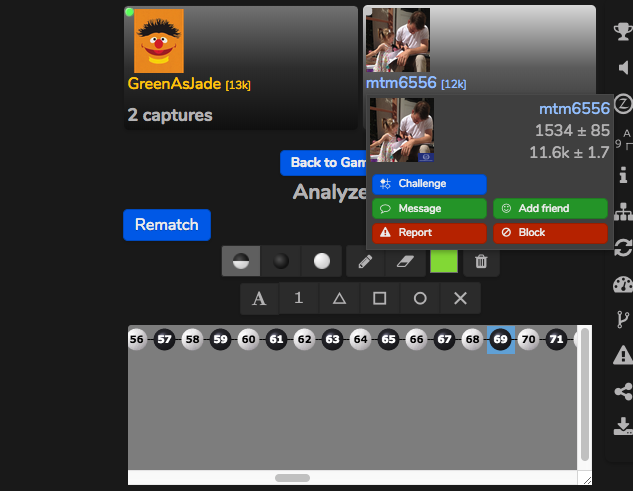 Well, for some reason it mostly happens whenever that nickname is in the lower 1/3 of the screen. 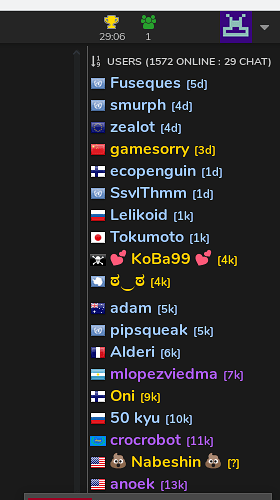 I don’t have a list that has a header showing the total number or users online.

I can reproduce your issue in a different list - its in the bottom left of my Profile: 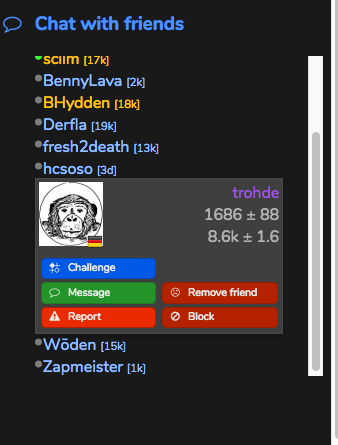 (trohde’s name was right under the “report” button")

I think I probably need to know all the places that cause it to happen.

Ah right, I almost never use it, didn’t think of looking there