You know, Level or Grade changes whenever a game ends, but the Overall plot is a Time-Level figure. 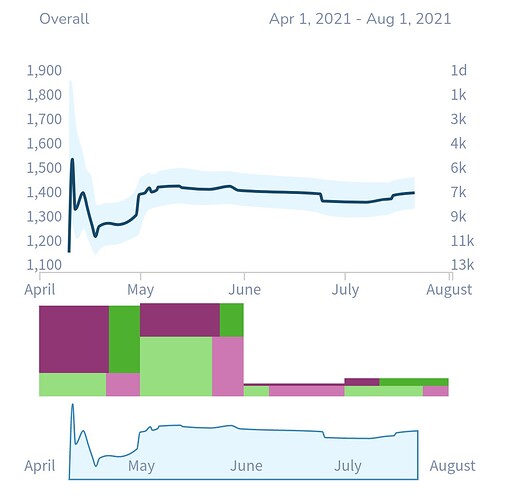 Edit: Never mind. I misunderstood. You want the plot of rating change vs game #.

It used to be like that, before Glicko - a per game rating graph.

It makes heaps more sense to me.

I can’t recall precisely what the argument is for per-day.

One argument is that Glicko is supposed to derate us over time-since-last-game. But I’m not sure if that’s implemented here.

Is there any other reason why per-game rating would not make sense?

Is there any other reason why per-game rating would not make sense?

It’d be nice to add it in a second graph, either a toggle or another way of presenting. Maybe not to replace the current graph entirely.

I don’t think one can see the Glicko deflation until another game is played. I thought I read somewhere (GitHub?) that while it’s supposed to happen over time, it won’t appear until something causes a rating update.

In a game, you could find nice moves and bad moves, i.e. winrates up and down. And one can link moves from a winrate curve.

In many games, you want to find nice games and bad games, i.e. ratings up and down. But one can not link games from his or her Time-Ratings curve!

I like time.
In my chart it shows that I had a long break after my first games.
It’s someway telling us something about the life of the player.

In a game based chart we couldn’t understand if someone is playing since long time or if he’s just playing a lot of games.

I love how we always totally disagree on things that are simply a matter of opinion! It’s amazing having another person I know who seems to always have the opposite opinion to me on things that don’t really matter one way or the other

I reckon you should be able to press a button to toggle one view or the other. Unfortunately, I think that the way the graph is presented is closely controlled by the back-end - efficiency rather than flexibility being chosen in the tradeoff.

Completely front end. It’s using the rating history, which stretches 5000 games in the past. To change something there is just a matter of working with a graphic library in ugly JavaScript.

Oh, that’s great news. I had the strong impression that the API in use returned rank-by-day, rather than rank-by-game.

If it’s by-game, then there must be some code bunching it up into days that I don’t recall, but it was some time ago now that I was in there.

You are so correct that the code in there is something to be contended with. But … armed with the knowledge that the API is suitable, I might don my sword and shield and take a look…

So I hacked and slashed, and have a switch to get a basic per-game graph.

I need to do a lot of tidying now - just letting you know I haven’t forgotten. 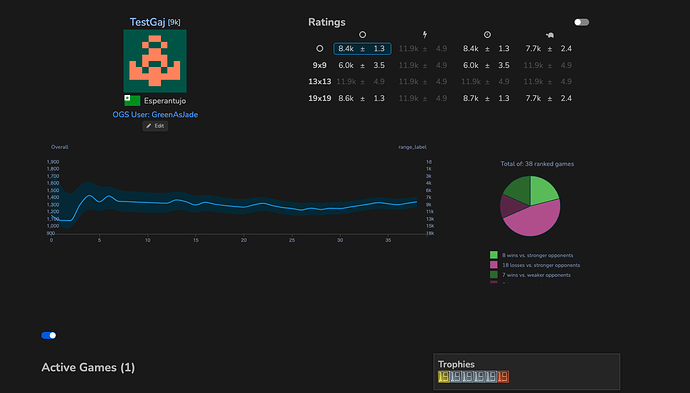 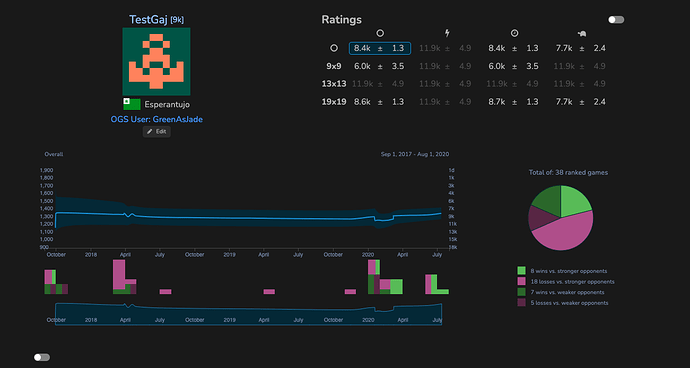 PS: what I like about the per-game rank graph is that there are no step changes in it. This test account didn’t “suddenly” become 8k, as per the by-time graph, that happened over a sequence of 4 games at the beginning, for example.

I just forgot it barely before your reply😂

there are no step changes in it

You can’t zoom into days. If there are lots of games on one day, that’s a step change.

But as you say - this is why I’m going for graph-by-game: precisely so that lots-on-one-day and big-gaps-between-any-playing are removed all at once, instead of requiring zooming in and out

Could add games’ preview below when hit a point on the game-rating graph? And one can link to the game page if he hit the preview. Is it possible to realize?

It’s a fantastic idea. I’ll certainly look into that after the basic thing is working.

(The basic function, not the SICK features

What do you mean by team timeline and sick feature? This feature will conflict with the main branch of OGS’s Github Repo?

Bhydden meant that he was in favour of the timeline view of ratings before your feature suggestion.

Sick feature is a compliment.

I’m nearly done with a first try at the Sick feature. It won’t conflict, it will merge cleanly.

Thanks for the translation into the Queen’s English

It won’t conflict, it will merge cleanly.

Except for maybe some trailing white space