AI based score estimation and auto-scoring is now live

[UPDATE: This feature has been disabled for players of a game while the game is ongoing. While you are playing a game, the old score estimator is still used. After the game is over, or while viewing an uploaded SGF, the new system will be used.]

Starting now when you click ‘Estimate Score’ we will use the AI server cluster to perform the estimation instead of our old random playout estimator. You should see a lot of improvement in terms of quality of estimation and speed in which the result is returned.

We will now also use this system when auto-scoring player vs player games. You will of course still have the opportunity to correct any mistakes the auto-scoring system made, but the initial suggestions should be much better now.

I consider this update somewhat “beta” quality, but almost assuredly better than what we had before.

If and when you run into examples of when the auto-score or score estimation does silly things, please post a link here or send me a PM with the link to the game so I can try and tune things.

Note that this system is not currently being used for player vs bot games, which force an auto-score with the old system still. Once we have things tuned and things ironed out, we’ll switch that system over too. 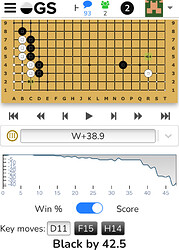 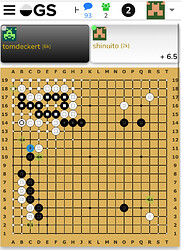 mm yeah that’s an artifact of me hard counting area that’s not really territory yet - probably better to use the point estimate that KataGo gives back now, I’ll look at updating that.

Analysis should definitely be off by default now.

While I fully welcome the change to improve the situation for scoring at the end of the game, and the eventual roll-out to auto-score human vs bot games, I am concerned about the upgrade to the score estimator for use in the middle of games:

‘Estimate Score’ we will use the AI server cluster to perform the estimation instead of our old random playout estimator. You should see a lot of improvement in terms of quality of estimation and speed in which the result is returned.

The previous score estimator was terrible, so I don’t think too many people took it seriously and it hopefully didn’t impact too many games. However, with players now able to query a strong AI to evaluate the current position, it seems that the score estimator would provide a reliable (and potentially undesirable) form of strong AI assistance.

For example, sometimes my opponent might make a blunder that I would not realize and fail to capitalize on (essentially one blunder followed by another). However, even with a strong AI that only gives the score estimate (or even just win probability), that might tip me off that my opponent’s last move presents an opportunity that I should search for, and thus even a basic (but reliably strong) score estimator could provide unfair AI assistance.

However, the score estimator provides even more than that, by highlighting confidence about territory, which can guide my next moves. Further, it seems that one can even play out some moves with analysis on and have the score estimate judge those positions, so it provides assistance in judging my next move as well.

I urge that you consider disabling the score estimator feature for all ranked games.

Would a possiblity be to display the score estimate only but without marking up the board for (ranked) games in progress?
It seems to me that knowing the score is of some assistance and being able to reliably estimate score might enable people to resign rather than dragging out games. However being shown exactly how the score is derived from the board, hence identifying unsettled areas seems like rather too much help. Especially if you can try out variations and score those to deduce moves that settle the board in your favour in a given area.

Score estimator should exist or not exist. If it exists, it should work correctly. So, good work!.
But maybe it should be turned off by default - so people not starting rioting.

Here’s a specific example of how the new score estimator could give away a game: 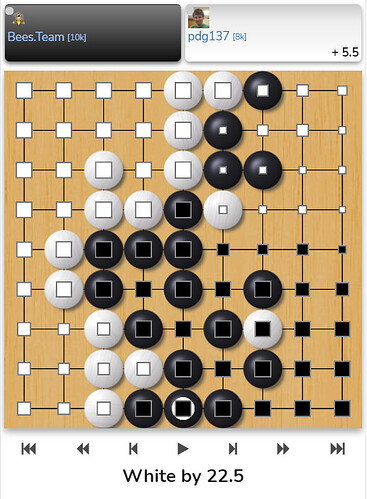 It seems like this kind of thing is not going to be solved by disabling the estimator until the end of the game, since presumably if we had passed at this point, auto-scoring would have revealed the weaknesses.

to resign rather than dragging out games

That’s how I use it, so an estimate of the score but not how it is on the goban would work best for me.

Ok make sure you go here to vote: [poll] Should the new AI score estimator be disabled while a game is in progress?

The score estimator has been a really useful tool for me to learn Go - trying moves out in analysis and getting quick feedback on their impact. I’m almost certainly over-ranked because of this behavior, but for me it’s enjoyable and has taught me a lot. I recently turned off my own analysis so that I can improve in reading “by myself,” but I wouldn’t begrudge an opponent who still uses it in our games.

If your goal is to attract new players to the game, I think this feature makes it a lot more accessible! I can’t speak to the concerns of the people who feel strongly it should be disabled.

Here’s a specific example of how the new score estimator could give away a game:

What if at the end of the game katago declares some corner a seki or dead etc but neither of the players have noticed, and katago is 100% certain, will both players want to go back to the game and play it out since they’ve gained some knowledge about the position?

Hey, now we have an example of how it might happen

I would prefer score estimate where you have huge brush tool like in Paint graphical editor. So it counts geometrical area of what you painted.
So no AI tells you additional Go information, but you can count very easily in geometrical sense.

I would prefer score estimate where you have huge brush tool like in Paint graphical editor. So it counts geometrical area of what you painted.

Yeah! For me it’s just a counting tool, since in correspondence it’s not practical to count the whole board again before each move. I’d be just as happy if it required manually closing all the cutting points and marking dead stones to get a count. If this goes away I might actually have to start using a paint program.

First, big thanks to @anoek for what I think we can all agree is an excellent update

With regards to this:

). I agree with the sentiments of many others - analysis should be disabled by default (especially for live games)

However, if there could still be a way to allow conditional moves just to keep correspondence games moving, that would be good

As it is still estimating by area scoring, its giving black extra points for each handicap stone and its also counting stones and eyes in sekis as points. I think there should be some sort of “warning” that the estimator is assuming area scoring, because vast majority of games are played using japanese rules.

@anoek - Can you clear this one up please?

it is still estimating by area scoring

Does the new AI score estimator always assume Chinese rules or does it assume the rules of the game in question?