What, if any, is the relationship between the “key moves” picked out by the AI in a game between two non-subscribers and the “explored moves”. I am using those terms in the way they appear to be used in Understanding the AI review.

Key moves is as defined there; they’re moves which lost many points for one side or the other.

Explored moves refers, I believe, to all moves which the AI has analyzed and generated alternatives to. The moves it “ran the engine on”, as I suspect a chess player would put it.

I think it runs a brief analysis of the game for the purpose of determining these moves, but I’m guessing flovo is typing out a more complete description.

had thought that the explored moves were the AI’s continuations starting with its preferred alternatives to the moves identified as showing the largest points movement.

It should be the moves with the highest win rate change.

Sometimes it turns out the move wasn’t as bad as the fast evaluation suggested, in which case the top 3 moves change to other moves.

Thanks, flovo, but your explanation would be clearer if you used the terms “key moves” and “explored moves” as in the documentation (which is to say, it’s not clear which is which; which is primary and which consequential).

So no one able to give an answer that can be easily understood by someone who doesn’t really know how AI works, but would like to know how to use its output to help improve his game?

Such an answer might ideally take the form: "The ‘key moves’ are …, while the ‘explored moves’ (in the case where only a few are shown) are …

At each position you have some explored moves selected to be shown with different values (according to prospective result if played)
Key move are a selection of these moves in the whole game (not only one position) with extreme differences between the move played and what AI consider that would have been best move.

At each position you have some explored moves selected

Groin, that’s only the case if one of the players is a gold-named subscriber. For non-subscribers only a few moves (typically, if not always, three) are.

My question is, how are these three (ish?) moves chosen? They are not necessarily at the points identified as key moves.

For the free users it does a single very quick pass over the whole game, identifies moves it thinks might be key moves of the game based on that very rough pass over, then deeply analyses only those moves. Sometimes that deep analysis proves the selected moves weren’t as key as previously thought, but there’s no really going around that.

My question is, how are these three (ish?) moves chosen? They are not necessarily at the points identified as key moves.

If I had to guess, recently the “key moves” changed from using winrate to using score from Katago. So sometimes a move that losing a lot of points doesn’t affect the winrate because that player was already winning by a lot or it could be a handicap game for example.

There’s a chance the “explored moves” are still using winrate, which might be causing the mismatch.

For example E5 here might not be the biggest score drop, but it is a sizeable blip on the winrate. 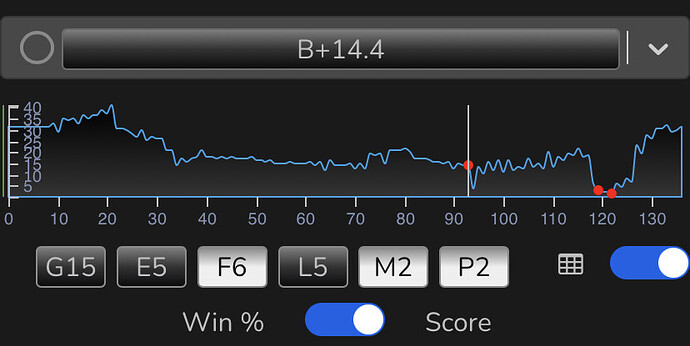 In this case the second one on the list matches one of the red dots. I guess they won’t be in order of the game but ordered by size of the mistake in points.

It could be that the red dots are on the list further down if they are small mistakes in points but large in winrate (like the game switched from black winning to white winning and vice versa).

I haven’t checked the code though to be completely sure. @benjito might know

IIRC, the server passes back 3 moves in the case of non supporter games. Those are the 3 moves with deep variations (I guess we’re calling these “explored moves”). I thought after December, those should now be looking at score as well. I can’t really confirm that though since I don’t have access to the backend.

The key moves, on the other hand, are calculated on the front end. These are just calculated by taking the score delta between each consecutive move.

Admittedly the discrepancy is not ideal. Ideas on how this can be improved are appreciated.

I am using the term in the way it is used in the documentation (wiki) linked in my original query. It sounds like you may well be using it in the same way. I understand that the three “free” (as we might say) “explored moves” are generated by the AI “at the back end”, where you do not have access, so you can’t explain how these three particular moves are selected out of all the game’s moves. [However, Shinuito speculates that that may in fact be the three moves which caused the greatest shift in win probability.] Whatever the basis of the decision was, it was after a full ‘grind’ in the engine, not the superficial one alluded to by Bhydden, above.

The moves which appear below the graph (the “key moves” of the documentation) are chosen “at the front end” as those which caused the greatest change in expected points for each player, based on a more cursory analysis by the AI.

Is all or any of that correct and if not, what have I failed to understand from what help has been offered by you and the other kind contributors here?

In this case the second one on the list matches one of the red dots.

According to the documentation:

" The red dots are just a visual representation what move was explored last and are a visual cue to see if and how the review is progressing. They do not indicate whether it was a good or a bad move."

You seem to be saying that they are something to do with it. In fact, when there are just the three red dots, don’t they tie up with the “explored moves”?

" The red dots are just a visual representation what move was explored last and are a visual cue to see if and how the review is progressing. They do not indicate whether it was a good or a bad move."

Hmm that doc seems partially incorrect. When there are just 3 static dots like that, they are located just before the worst moves by some metric (score or win rate, we’re not sure).

What it may be talking about is the behavior while the full review is loading. You may notice a bunch of red dots moving around when this is happening. They aren’t key moves or worst moves. They are just indicators of how the review is progressing.

Yes, I believe you are right. The doc should be updated to clarify that. Maybe best done once it is totally clear what is going on “at the back end”, and exactly what those three static red dots do indicate?

Here is the particular game which caused me to start this thread. It’s a club game and I play black against another club player. At move 176, I make a terrible blunder: 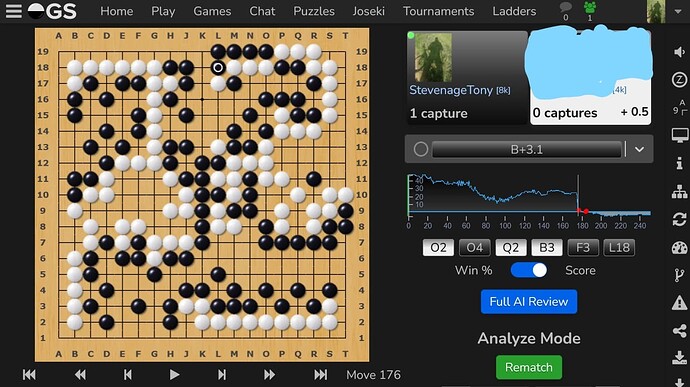 Clearly, I should have played at K18 to connect. AI notes this as a key move (rightmost of six), but does not explore a better move.

Instead, it shows a different response to White’s capture: 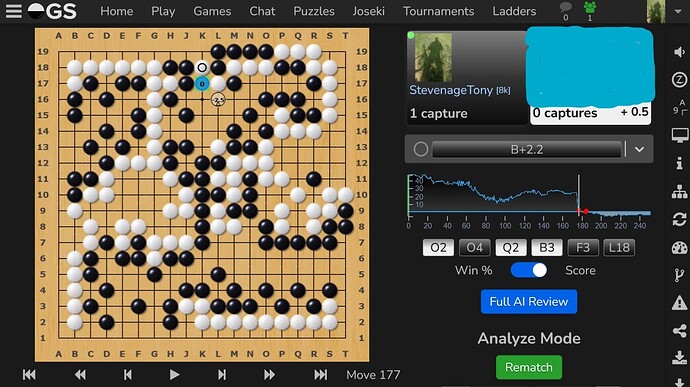 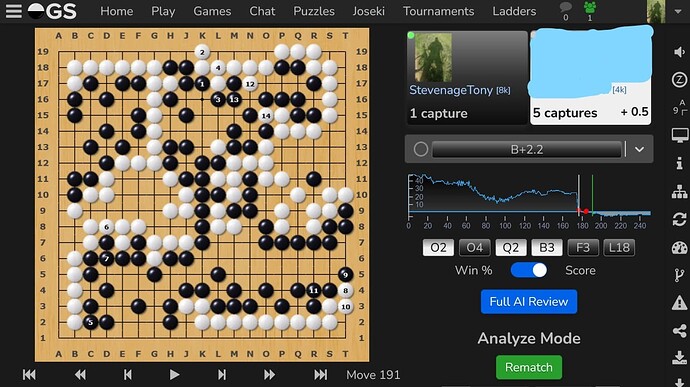 Here is the stripped, anonymised sgf:

What is the explanation for this?